Nickel Monthly News For The Month Of April 2020

Welcome to the nickel miners news for April. The past month saw nickel prices rise with several nickel mines impacted by COVID-19 suspensions. In particular, in the Philippines about 50% of nickel ore production has been suspended due to COVID-19. 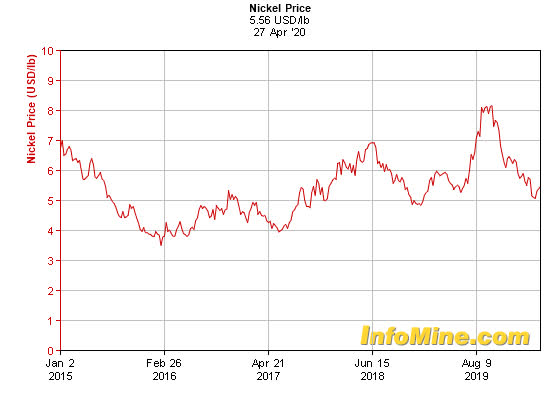 The chart below shows nickel is forecast to be in deficit after ~2020-2022 (note it is a bit outdated now).

Note: Some others such as BMI have been forecasting a nickel surplus by 2020 due to increased Indonesian production and reduced Asian demand.

As a reminder the November 2017 McKinsey report stated:

“If annual electric vehicle [EV] production reaches 31 million vehicles by 2025 as expected then demand for high-purity class 1 nickel is likely to increase significantly from 33 Kt in 2017 to 570 Kt in 2025.”

Note: That is a 17 fold increase in just 8 years, albeit only on Class 1 nickel. 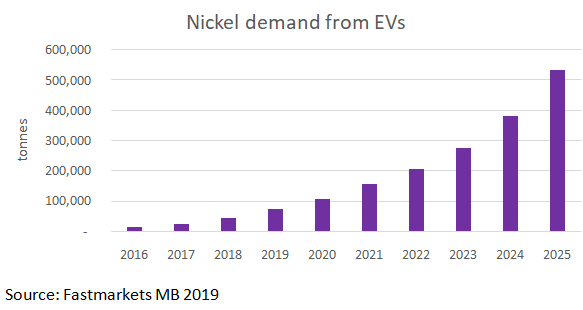 Investors can also read my past article: “Top 5 Nickel Miners To Consider Before The Nickel Boom.“

Nickel miners in the Philippines hit by COVID-19 prevention measures…..The Philippines’ Surigao del Norte province is stepping up measures to prevent the spread of the coronavirus outbreak, leading to the suspension of mining operations starting on Wednesday (April 1), two nickel miners confirmed on Tuesday (March 31). Nickel Asia and Global Ferronickel, which account for more than half of the country’s nickel ore output, said in separate statements that they have received copies of the suspension order, dated Saturday (March 28), from the provincial government, according to Reuters. The Philippines is the second largest nickel-producing country in the world, with its output reaching 340,000 metric tons in 2019, down from 366,000 metric tons in 2018.

Analysis: COVID-19 impacts on Indonesia’s nickel industry. In 2020, a surplus in the nickel market will increase as the COVID-19 pandemic will hurt demand. According to a report by Norilsk Nickel, one of the world’s leading nickel producers, nickel consumption is expected to grow only 2.8 percent in 2020, less than the earlier forecast of 3 percent. In term of volume, primary nickel consumption is expected to reach 2.45 million tons this year, down from the previous projection of 2.54 million tons.

Nickel sulphate: GEM and ECOPRO to build high-nickel Li-ion precursor capacity in Fujian……The JV will be dedicated to production of NCA and high-nickel NCM cathode precursor materials, targeting an initial capacity of 24ktpy by 2022 and 48ktpy by 2024.

Vale informs on judicial decision. Vale S.A. (“Vale”) informs on the decision by the 1st Court of Ouro Preto, Minas Gerais, issued on April 14th, 2020, regarding the request for a preliminary injunction within the scope of the lawsuit 5000885-66.2020.8.13.0461 proposed by the Public Prosecution Office of the State of Minas Gerais, that determined, among others, the freezing of Vale’s funds in the amount of R$ 50 million solely to ensure the compensation for losses that could be caused as a result of the evacuation of the residents of the flooding area in case of a hypothetical rupture of the Doutor dam, which is owned by Vale. Additionally, the judge ordered that within thirty days from the date of the evacuation, Vale initiates payments, until the final resettlement, of monthly emergency installments to all people that were relocated from their homes in the amount of 1 [ONE] Brazilian minimum wage to adults, 1/2 (one-half) of the minimum wage to adolescents and 1/4 (one-fourth) of the minimum wage to children. Vale estimates that 229 people will start receiving the emergency payment.

Vale’s production and sales in 1q20. Production of finished nickel was strong, for a first quarter at 53.2 kt, despite the decline of 2.9% year on year, as 1Q19 also presented a solid performance. The sequential decline of 6.2% from 4Q19 was mainly due to seasonality and routine scheduled maintenance at PTVI site and at the Matsusaka refinery in 1Q20, along with lower source ore from Canadian and Indonesian operations being processed at the Clydach and Dalian refineries, respectively.

READ ALSO  Will investing in our newfound sense of community bring returns?

Investors can read my article “An Update On Norilsk Nickel.”

In 2017 BHP announced a US$43.3m investment in its Nickel West project to enable conversion to nickel sulphate.

On March 30, BHP Group announced: “Chile – BHP’s US$8 million plan to strengthen the public health network facing the spread of COVID-19 in Chile.”

On April 21, BHP Group announced: “BHP operational review for the nine months ended 31 March 2020.” Regarding Nickel: “Higher volumes following completion of major maintenance activities at the Kwinana refinery and Kalgoorlie smelter in the prior quarter.” Nickel production for the March 2020 YTD was 56kt, down 4% on March 2019 YTD. Volumes were 53% higher than the past quarter.

2020 distribution and revolving credit facilities. To support this commitment, the Board believes it prudent to defer its decision as to whether to proceed with the proposed cash distribution of $0.20 per share (c. $2.6 billion) in 2020, amid the current period of exceptional economic uncertainty. We have also reinforced our liquidity position ($10.1 billion of committed available liquidity as at 31 December 2019) through the refinancing and extension (see below) of our revolving credit facilities (the “Facilities”) on the same commercial terms as our 2019 Facilities.

Glencore community support fund. To support their efforts, today, we are announcing the launch of the Glencore Community Support Fund ($25m).

Update on COVID-19. Glencore continues to engage with the relevant authorities, unions and other stakeholders regarding the steps we are taking to minimise the impact of COVID-19 on our operations…..While the majority of our operations have not been materially impacted, the following provides an update on the impacts that have occurred at certain of our assets since our previous update on 26 March. As previously reported, we intend to provide updated guidance in respect of 2020 production, key industrial division unit costs and capital expenditure, alongside our Q1 production report, scheduled for release on 30 April.

You can view a company presentation here.

Eramet: Q1 2020 sales of €774m, down 11%, affected by the decline in material prices (a sharp decline in manganese ore and ferronickel prices). Limited impact of Covid-19 pandemicon the Group’s activity in Q1 2020. New Q1 operational recordsfor the Mining and Metals division:

Sherritt announces continuing discussions with key stakeholders in connection with its transaction and postponement of meetings.

On April 21, IGO Limited announced: “New Century launches A$51.1 million capital raising, with IGO Limited acquiring a strategic stake of up to 18.4%.” Highlights Include:

Successful completion of placement to IGO Limited as part of fully underwritten A$51.1 million capital raise. New Century Resources Limited [New Century or the Company] [ASX:NCZ] is pleased to announce that it has successfully completed its A$23.775 million placement to IGO Limited [IGO] [Placement] as part of the subscription agreement (Subscription Agreement) announced on 21 April 2020. Pursuant to the Placement, 158,500,000 new fully paid ordinary shares in the Company (New Shares) were issued to IGO today at an issue price of A$0.15 each to raise a total of A$23.775 million.

Panoramic’s Savannah mine and mill has a forecast life of mine average annual production rate of 10,800t of nickel, 6,100t of copper and 800t of cobalt metal contained in concentrate. 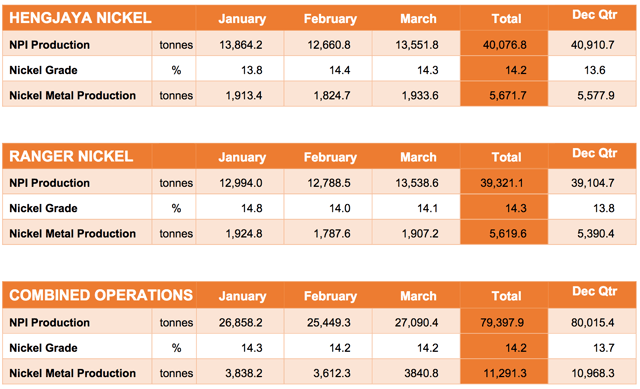 Grant of pptions. Amur Minerals Corporation (“Amur” or the “Company”), the nickel-copper sulphide exploration and development company focused on the far east of Russia, is pleased to announce that a grant of 30,000,000 share options over Ordinary Shares (“Share Options”) to certain Directors, executives and employees.

Equity placing. Amur Minerals Corporation is pleased to announce that it has placed, subject only to admission to trading on AIM, 75,000,000 new Ordinary Shares in the Company (the “Placing Shares”) at a price of 1p per share to raise gross proceeds of £750,000 (the “Placing”).

The Cathedrals, Stricklands and Investigators nickel-copper discoveries (at Mt Alexander) are located on E29/638, which is held in joint venture by Western Areas Limited (25%) and St George (75%). St George is the Manager of the Project with Western Areas retaining a 25% non-contributing interest in the Project (in regard to E29/638 only) until there is a decision to mine.

Final results for year ended 31 December 2019……….Strong cash balance of £17.8 million at year end, following injection of Orion funds….Company is well advanced on the financing process for the Araguaia Project…..Vermelho Nickel Cobalt Project 43-101 Prefeasibility Study released [PFS] demonstrating that the project can be a significant low-cost supplier of nickel and cobalt sulphate for the EV battery market: 38-year mine life. Cash flows after taxation of US$7.3 billion. IRR of over 26%. Sits on the lower half of the global cost curve.

Conic Metals has been formed from the Cobalt 27 spin-out. Conic Metals offers broad exposure to nickel and cobalt through a 8.56% JV interest in Ramu, 11 royalty investments, and an equity share of ~7% of Giga Metals Corporation.

Conic releases Ramu q1 2020 production performance. On the commodity price front, LME nickel prices were up slightly in the period with the average cash settlement being US$5.77 per pound compared to US$5.61 per pound in Q1 2019. Nickel prices, like most base metal prices, have more recently been significantly impacted by the economic fallout from COVID-19. “Despite the recent decline in commodity prices and the continued downward economic trends in light of the global pandemic, Ramu was able to improve on 2019 production and continue to deliver product to customers. We have not seen a significant decline in demand for Ramu product at present”, added Mr. Cochrane.

Investors can view a CEO video here, or my CEO interview here on Trend Investing.

Note: Some of the above companies are covered in the Cobalt monthly news.

Nickel spot prices were higher and LME nickel inventory was flat in April.

Disclosure: I am/we are long NORILSK NICKEL [LSE:MNOD], GLENCORE [LSX:GLEN], RNC MINERALS [TSX:RNX], AXIOM MINING (ASX:AVQ), ARDEA RESOURCES [ASX:ARL], AUSTRALIAN MINES [ASX:AUZ], POSEIDON NICKEL [ASX:POS], Amur Minerals [LN:AMC]. I wrote this article myself, and it expresses my own opinions. I am not receiving compensation for it (other than from Seeking Alpha). I have no business relationship with any company whose stock is mentioned in this article.