The Revolution of Augmented Reality

NexTech AR Solutions Corp. (OTCQB:NEXCF) bills itself as a company that engages in the acquisition and development of augmented reality technology:

The company offers ARitize eCommerce, the browser-based and Web enabled AR shopping platform; NexTech University, an app-based solution that allows companies and educational establishments to leverage their existing 2D assets and overlay immersive 3D-AR experiences on top of that content for an interactive training experience; NexTech Studios for branded entertainment and immersive 360 experiences; NexTech 3D/AR-360, an end-to-end solution; and ARitize360 that gives customers an interactive experience by transforming their products into AR models, as well as CaptureAR, an AR technology that makes 3D augmented reality creation accessible.” They were incorporated in Canada in 2018.

Its website certainly has some flashy portrayal of the technology that it alleges to offer: 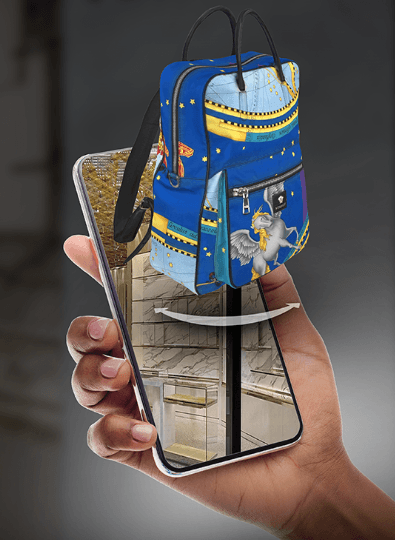 And the company claims to be partnering with an increasing number of Fortune 500 companies and schools to offer its digital solutions. This plays well during coronavirus-related lock-downs and increased use of digital conferencing.

A glance at its Income Statement suggests that it is successfully growing its business (Note that the two right columns are only for trailing seven months results): 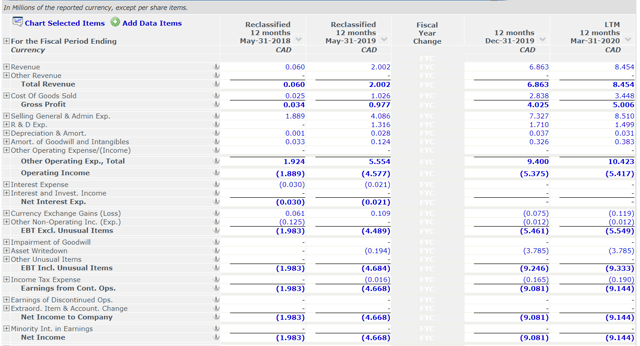 The stock price has also seen a terrific run sending the company from a market cap of $51M CAD in March 2020 to +$660M CAD today as the share price has gone from 0.85 CAD to 9.43 CAD. The massive run-up in share price has coincided with management’s guiding towards explosive revenue growth as business hits its stride.

And while the CEO’s bio is suspiciously absent from its website, S&P Cap IQ offers the following:

Mr. Evan Gappelberg serves as Chief Executive Officer and Director at NexTech AR Solutions Corp. since January 12, 2018. Mr. Gappelberg serves as an Advisor of Future Farm Technologies Inc. He served as Managing director at Atlas Advisors, LLC, an independent investment advisory and money management firm that offers small-cap companies consulting services. Mr. Gappelberg is an accomplished entrepreneur with an expertise in creating, funding and running start-ups, and he has extensive experience both as a hands-on operating executive and well as a public markets professional. From 2000 to 2005, Mr. Gappelberg was the co- founder and CEO of EG Products, where he funded, patented, imported and distributed the market’s first LED light-up toy. He secured license deals from Disney, Universal Studios, Clear Channel Communication and built a national sales channel, landing contracts with Walgreen’s, Macy’s, and live event shows like Ringling Bros. He was also was co-founder and CEO of an app development company which created and published over 200 successful apps for both Apples iTunes store and the Google Play store. Prior to being a successful entrepreneur, Mr. Gappelberg worked on Wall Street and has more than 20 years of extensive experience as both a hedge fund manager and Senior Vice President of Finance.

Pulling Back The Curtain

It will be helpful to rewind back to 2018 and start at NexTech’s beginning. NexTech became a listed stock via a spin-off from the cannabis penny stock, Future Farm Technologies or FFT (OTCQX:FFRMF), a separate busted company that Evan Gappelberg was involved with. NexTech then raised $2.7M CAD via a private placement offering. The company then went on to perform four acquisitions:

2. AR ecommerce: which is literally a company that sells vacuum cleaners, paying $1.6M CAD. AR ecommerce had TTM revenues of $3.6M CAD at the time of the acquisition.

4. Infinite Pet Life: A maker of animal anti-aging supplements with TTM revenues of $2.2M at the time of the transaction. This last transaction closed in April of 2019.

With $6M in vacuum and pet supplement revenues secured and a generic 360 degree e-commerce (i.e. augmented reality) product, NexTech was ready to begin a paid promotional blitz billing itself as a revolutionary start-up experiencing hockey-stick revenue growth from virtually $0 overnight to +$6M. The only problem was that only $3k was actually related to anything outside vacuums and pet products: 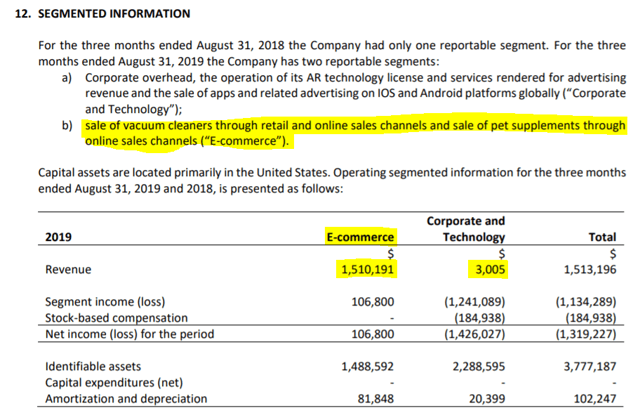 NexTech has since discontinued breaking out its sales by product type. Hindenburg Research has done an excellent job of bringing light to NexTech and by its calculations NexTech has:

gone on a paid promotion spree, engaging at least 8 promotional outlets. It has pumped out 112 press releases over the past year – equating to a press release every ~2.2 trading days.

NexTech’s website touts all of the corporate relationships it has rapidly established with its products:

But according to Hindenburg’s diligence:

Contrary to management’s claims that its customers “have nothing but rave reviews”, we spoke to customers and found that many of them – including ones featured by the company in its glowing press releases – were either entirely unaware they had a relationship with the company or had never actually implemented the product.

Taking a Closer Look at Financials 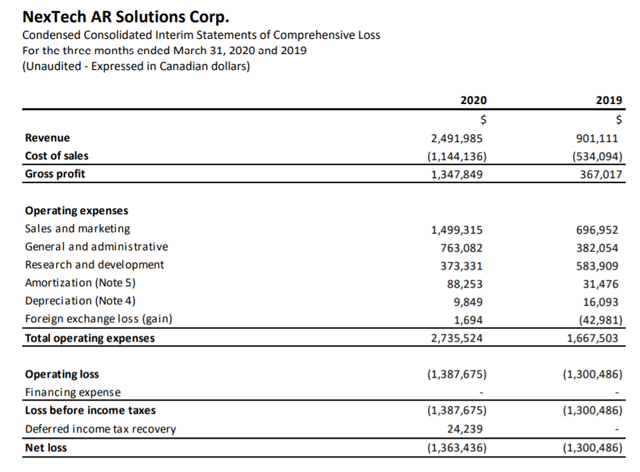 What we see here is revenue growth from the cutting edge business of pet supplement sales. What we also see here is 200% growth in sales and marketing expense as NexTech pays companies to write favorable coverage and promote its product. What we do not see is R&D spending, which has been slashed by 36%. Odd to see for a cutting edge tech innovator.

Fast forward to May 2020 where NexTech is putting out press releases on record monthly revenues of $1.3M. What is left unsaid is that once again in April 2020 the company completed another acquisition to boost revenues, this time it paid $4.8M to buy $1M in annual revenues by acquiring Jolokia Enterprise Video Solutions, a company that appears to be in the business of helping organizations with video training. See this link for the paid advertisement and notice the “work from home” hype.

By now the bait-and-switch game should be clear. Position yourself as a revolutionary augmented reality firm with exploding revenues while acquiring several unrelated and diverse businesses to contribute this hyped revenue growth. This is all very reminiscent of Theranos where a hyped product didn’t really function or exist at all.

NexTech CEO’s bio certainly lists out an extensive background. Entrepreneur, app developer, hedge fund manager, Wall Street veteran, etc. For a more realistic view of his background and a catalog of the egregious insider dealings between management and NexTech, I’d again go through Hindenburg’s extensive analysis. I will instead try and focus on how management has compensated itself. The statement of cash flows shows that in the 3 months ending March 2020, management was awarded $651M in share-based compensation. That alone is 25% of revenues! Although investors will perhaps consider it an improvement over the same quarter in 2019 when management awarded itself stock-based compensation worth 40% of revenues. 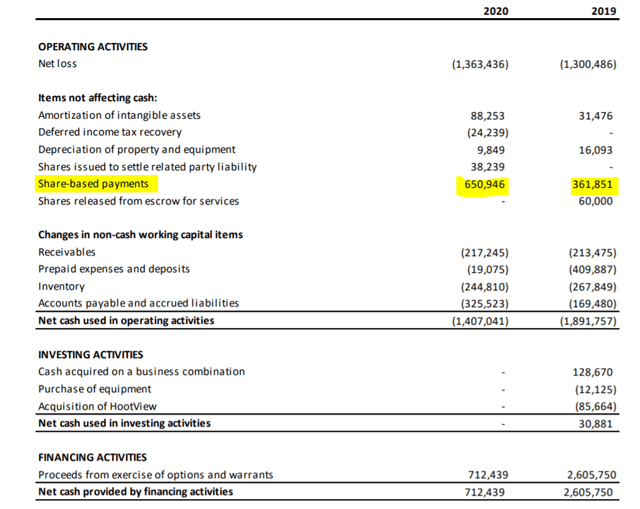 Management has accumulated nearly 15% of the shares outstanding in NexTech, mostly from awards granted to itself.

The apogee of NexTech’s ridiculousness just might be its latest earnings conference call (and incidentally its first). You truly have to listen to the call to believe it. The only analyst initially asking questions is from Zacks Small Cap Research (a firm that NexTech has paid for promotional articles). The analyst is asking generic, but challenging questions of the CEO. But suddenly when on the topic of increasing operating expenses, the analyst asks if NexTech’s new CFO agrees with the CEO’s statements:

Great. Okay. And then so how do intimacies[SIC] for what’s going to happen to operating expenses?

Can I ask Kashif if he agrees with that?

At this point an automated voice announces that the conference call is ending:

I think conference is going to end. Oh no –

As confusion and apologies ensue, an “unidentified analyst” hastily joins in and asks the billion dollar question, i.e. how much of NexTech’s booming revenues is really from its AR breakthroughs versus its traditional vacuum cleaner business:

Real quick one. I was wondering, sorry about that. I know we have 60 seconds left. I was just wondering if you could speak to the revenue attribution in the quarter between the e-commerce businesses you have and software.

Yes. So that’s a great question. We don’t break down the revenue. What I could say —

Where NexTech Goes From Here

NexTech spent the back half of 2019 and first half of 2020 by continuing to raise needed cash through periodic private placements. I suspect the company will continue to follow the same formula of raising money from unsophisticated investors to fund this cash-burning loop of awarding management and acquiring random companies in attempts to boost revenues.

Needless to say, a +$600M market cap is very impressive for a company that does a few million in vacuum sales and $3k in 3D/360 degree imaging (a generic technology already widely in use), so I think at some point the sheer size of the company will likely begin to attract additional attention and tempt the newly minted millionaires on the management team to dump their shares.

What is clear is that this is not a sustainable game and I will patiently be watching for the next round of earnings. My price target of $0.01 for NexTech implies a negative 99% return for investors. Given only $3k in reported augmented reality revenues, massive cash burn, negative net income, I am comfortable in holding a short position on this stock. I have no doubt NexTech will end up just like the hollow company from which it was spun out, the cannabis penny stock Future Farm Technologies. Below is its pumped and dumped stock chart: 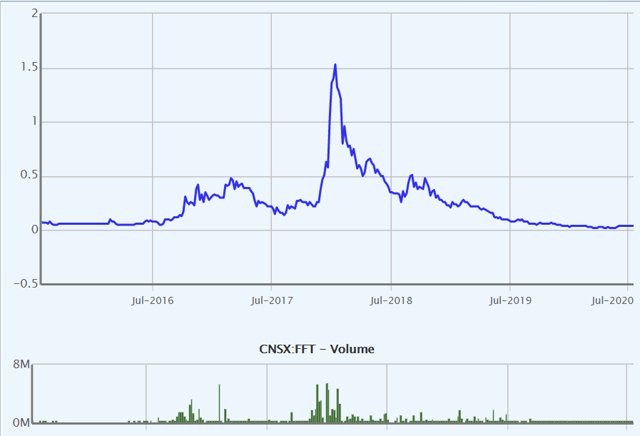 And who was there selling at the top in Q1 2018 to the scammed investors that lost everything? None other than our current CEO of AR darling NexTech.

But don’t take my word for it. Maybe NexTech’s “Buddy the virtual bud-tender” will convince you that NexTech’s revolutionary technology is a game changer after all: 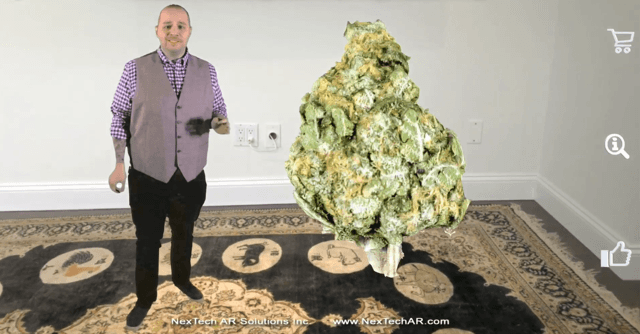 Disclosure: I am/we are short NEXCF. I wrote this article myself, and it expresses my own opinions. I am not receiving compensation for it (other than from Seeking Alpha). I have no business relationship with any company whose stock is mentioned in this article.

Previous PostEx-Nissan boss Ghosn says Renault/Nissan results ‘pathetic’Next PostDEFI Is Heating Up – But will it last?