News Corporation: Forget About A Recovery In The Near Term (NASDAQ:NWS)

News Corporation (NWSA) is bleeding cash and is not growing. In Q4, the company reported a decline of its revenues across the board and it’s very unlikely that its business will recover from the pandemic anytime soon. In addition, the rise of competition along with the lack of growth prospects will prevent News Corp. from improving its bottom line in the near term. Since News Corp. trades above its peers from the media industry, while its business is unable to show growth, we believe that its stock is uninvestable at this stage.

News Corp. is a major media company with interests in various industries. Its news segment, which includes newspapers such as The Australian, Sunday Times, The Sun, The Times and others, generates the most amount of revenues for the company. The rise of Google (GOOG) (GOOGL) and Facebook (FB) in recent decades hurt News Corp.’s core advertising business, which continues to bleed cash to this day as more advertisers now place their ads online. Since News Corp. doesn’t have any competitive advantages in the digital medium, it decided to offset the losses from the advertising business by expanding into different niches.

The company currently has a division with digital real estate assets such as realtor.com, it’s the majority owner of Australia’s pay television company Foxtel, and it’s able to make money from subscriptions for The Wall Street Journal, which it also owns. However, none of those businesses are growing fast enough to offset the losses from the news media segment and for that reason, we believe that News Corp. is uninvestable.

READ ALSO  The shecession (she-recession) of 2020: Causes and consequences

In Q4, News Corp.’s revenues were down 22.3% Y/Y to $1.92 billion, while the company’s net loss from April to June was $401 million, against a net loss of only $42 million a year ago. Such a decline was caused by the ongoing pandemic, which hurt News Corp.’s businesses. While the company’s digital real estate assets have experienced an increase in traffic from April to June, the overall real estate business failed to achieve growth, as its revenues in Q4 were down 16% Y/Y.

The revenues from the video subscriptions were also down 24% Y/Y, as the company’s video service Foxtel has experienced a decline of its total subscribers despite the strength of its OTT offering. While the Dow Jones segment experienced an increase of the total subscribers by 23% Y/Y, the segment’s revenues were down 4% Y/Y. At the same time, the news media business, which generates the most amount of revenues, declined by 41% Y/Y amid a weak advertising market.

Such a poor performance in Q4 translated into the overall poor performance for the whole fiscal year. In FY20, News Corp.’s revenues were down 11% Y/Y to $9.01 billion. During the period, the company lost a substantial portion of its video subscribers, took a COVID-19 impairment charge, and suffered from currency fluctuations, which hurt its top and bottom lines. As a result, News Corp.’s net loss for the year was $1.55 billion against a net income of $228 million in the previous fiscal year. Considering such a poor performance, it’s unlikely that News Corp.’s business will recover to its pre-COVID-19 profitability levels in the near term and it’s likely that its business will continue to bleed cash.

Going forward, there’s every reason to believe that News Corp.’s business will struggle to create shareholder value. As the biggest generator of revenues, the company’s news division will not be able to recover to its pre-COVID-19 profitability levels in the foreseeable future. In the recent conference call, the management said that advertising revenues for the news segment in July were still down 25% to 30% and the business will continue to be negatively impacted by COVID-19.

While News Corp. has been actively expanding its digital projects from different segments, those projects are still unable to offset the losses of the core business. At the same time, the company’s video division is also unlikely to drive growth. While Foxtel’s OTT low-margin offerings recently reached a new milestone and received over 1 million subscribers combined, the total number of subscribers has declined by nearly 500,000 in FY20, as the business’s high-margin broadcast offering starts to lose steam. In addition, as the streaming market becomes more saturated every day, the growth of OTT offerings is likely going to slow down. 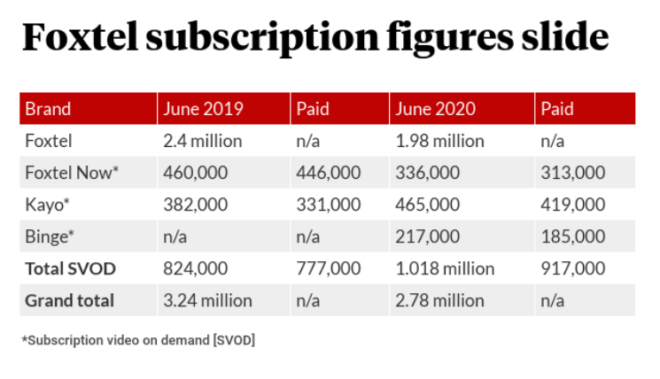 While it’s likely that the real estate and Dow Jones segments will recover quickly in comparison to other businesses, as they were not affected so badly by the virus, they’ll still not be able to substantially improve the company’s overall earnings.

Considering all of this, there’s a high chance that News Corp. will continue to be in a bad shape and will not be able to show a meaningful performance in the near term. The Street already expects the company’s revenues in FY21 to be down by 7.91% Y/Y and it will take a couple of years for News Corp. to recover to its pre-pandemic levels. In addition, as News Corp. trades at a higher forward P/E ratio in comparison to its peers, while at the same time it has one of the worst margins in the industry, its stock is overvalued. For that reason, we believe that News Corp. is uninvestable at this stage and it’s better to look for better opportunities with a more attractive risk/reward ratio on the market.

READ ALSO  The Debt Crisis Is Mounting For Oil Economies

The goal of the service is to provide you with actionable short ideas from which you can profit by betting against the companies that trade at irrational exuberance levels and have limited upside. While the Fed continues to pump the stock market, there is still an array of businesses that cannot justify their premium valuations and our goal is to find those businesses. If you have a high-risk tolerance and interested in shorting stocks, then this service is for you.