Newmont Corporation (NEM) is one of the most successful mining companies in the world. It has a long and excellent track-record and the acquisition of Goldcorp is poised to deliver double-digit growth for years to come. Furthermore, recent events in the market have highlighted the importance of gaining exposure to gold and owning shares of Newmont is a good way of doing this. Having said this, in a shorter time frame, Newmont shares could be about to enter a “corrective” phase, offering us an even better buying opportunity.

NEM: The cream of the crop

Newmont Corporation is without a doubt one of the most successful miners in the business. Having been around since 1916, the company’s operations are well diversified both in terms of production and location. The company has mines in the U.S., South America, Africa, and Australia and not only mines gold and silver but also copper, zinc and lead.

The most common problem one can find with gold miners, perhaps ironically, is that they are highly indebted. To be fair, extracting gold and the like is a long and difficult process that requires financing, so let’s begin by looking at the balance sheet. 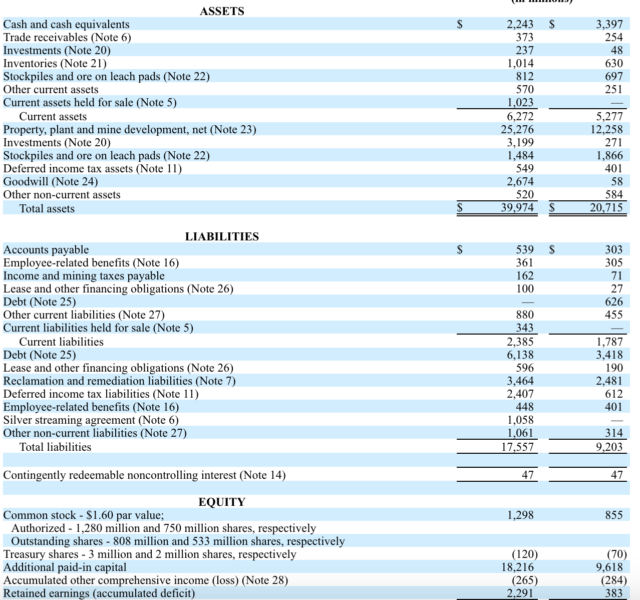 Above, we can see the evolution of the balance sheet from 2018 to 2019 for Newmont. As we can see, the company has expanded aggressively, reflected in almost a doubling of assets and liabilities. This is the result of the purchase of Goldcorp, which has been described as the biggest takeover in the gold sector’s history.

Nonetheless, the company remains in incredibly good financial health, with a D/E of 0.32 and around 1.8 financial leverage. Net interest expense at 2.5% of revenue could be a bit lower, but no reason to worry.

The merger with Goldcorp as well as the continued appreciation of gold has helped Newmont maintain growth on all fronts. 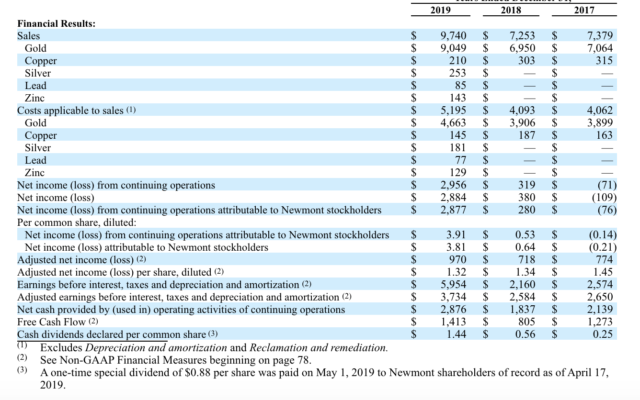 There is no doubt that after the Goldcorp merger, Newmont is a leading player in the gold sector as well as an overall outstanding business by most financial measures, including double-digit growth, +40% gross profit margin. The only question left to answer is whether the underlying products they offer are any good.

What’s in store for gold and the metals complex? It has become quite evident by recent events that physical gold is in high demand. For years now, countries such as China, Russia, and India have been hoovering up domestic production.

More recent events, however, have further highlighted the incredible shortage of physical gold. Last week the spread between spot and futures prices reached an all-time high. Ordinarily, if the price of the New York gold futures rises too far above gold prices elsewhere in the world, banks simply buy kilobars elsewhere in the world and fly them to New York. But the disruption of global supply chains has thrown that process into doubt. 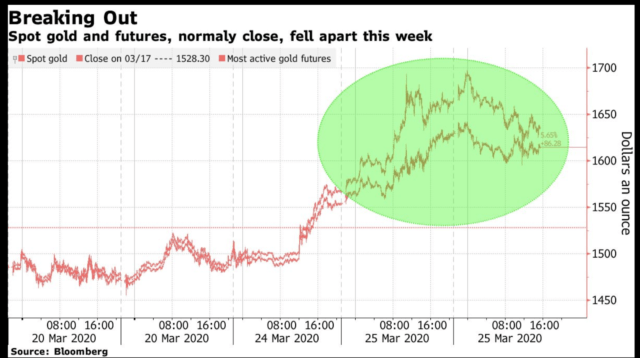 This shows that there is either a shortage of gold or, as some have pointed out, an inability to transport it. However, the fact that shorter-term futures contracts are trading at a premium to longer-term contracts could be an indication that the shortage is very much real.

This is an anomaly in the gold market, which should usually be in a situation of contango, meaning future prices should be above spot prices. Why? Because holding physical gold has associated costs of storage and distribution (carry charges). The holder of the futures contract is paying for a premium for getting his gold stored for them. And the longer the contract, the higher the premium. The fact that people are willing to pay more for receiving gold in a month than in two or three indicates that perhaps investors have some doubts over the longer-term availability of gold. What we are witnessing is known as backwardation in the gold market.

Lastly, it is hard to make an argument against owning gold when governments around the world are printing money and handing it out to its citizens. Previous forms of “money printing” may not have succeeded in creating price inflation as this money was kept in the form of bank reserves or went straight into financial assets. However, the laws of supply and demand would argue that more demand, through government handouts, and less supply, through production shortages caused by the virus, should lead to higher prices.

Some might say Newmont is “overvalued” because it trades at a P/E of 38, but there is a much more easy way to value the company which leads us to a much higher target price.

In 2019, the company reported that it had 124 gold reserve ounces per 1,000 shares. That’s 0.124 ounces of gold per share. At the current price of gold, around $1650, that would imply a share price of $204, compared to the current price of $50. Unless you completely disagree with my assessment of the metals market, this seems to be a very undervalued company. Nonetheless, from a shorter-term perspective, Newmont’s stock price could be reaching a near-term top, and could soon come down to around $30.

This is a possibility that fellow SA contributor Avi Gilburt has forecasted using Elliott Wave theory, and which he has discussed more in-depth with members of his service, The Market Pinball Wizard. NEM Corporation could be about to enter a wave 2 of an upward 5-wave cycle, where waves 2 and 4 are corrective downward moves, while the overall trend is bullish.

This certainly coincides with my long-term assessment of the company and the metals market, and the shorter-term decline could coincide with a swift market recovery and a corresponding downward move in the gold price. But again, I would view this as a short-term correction within a much larger bullish structure.

As I always say, nothing in this world is certain, least of all investing. The best approach here is to scale in and view any decrease in price as an opportunity to purchase a great company at an even further discount. Gold has and always will be a vital asset in our economies, and I suspect the importance of its role in our financial system could increase in the next decade. If central banks still think it prudent to hold gold reserves, why shouldn’t you?