New York governor Andrew Cuomo on Friday promised to deploy more National Guard troops to airports to improve adherence to the state’s quarantine rules for travellers ahead of the holiday season.

The state this week introduced exemptions to its previous 14-day quarantine requirement for most arrivals in the state. Travellers who take a Covid-19 test three days before coming to New York and another three days after arriving are able to move about freely if the second test is negative.

Enforcement of quarantine rules has proved difficult, however, and announcing the increased deployment of the National Guard, Mr Cuomo said: “I want people to know we’re serious.”

New York, which was one of the world’s worst-hit cities during the first wave, has since managed to keep case and hospitalisation rates lower than most of the rest of the country, but this is at risk as Covid-19 rates soar across the US.

The National Guard, a uniformed military reserve unit, is already being deployed at some testing sites in New York and is assisting with the traveller screening programme. At airports, troops collect forms from travellers to allow for contact tracing. Many travellers arrive in the state by car, however.

Visitors who do not comply with quarantine rules can be referred to the New York Department of Health and could receive a summons or fine.

Airlines do not believe they will be responsible for checking whether passengers have had Covid-19 tests before boarding.

The number of new coronavirus cases is beginning to creep up in New York state — by 3.1 per cent in the past week according to the Covid Tracking Project — although it is still the second-slowest rate in the nation after Louisiana.

In New York City, local lockdowns were imposed in some neighbourhoods in Brooklyn and Queens, which are now being eased. Areas of Staten Island are among those now showing higher positive test rates. Outside the city, the Finger Lakes, western New York, and Long Island have the highest Covid-19 rates in the state. 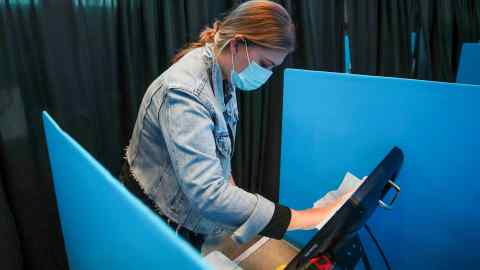 He said that he was talking to Bill de Blasio, New York City mayor, about expanding police presence at airports, too.

Previous PostTehran Doubles Down On Biden As Preferred Candidate After Trump “Brought Iran To Its Knees”Next PostSpirit Airlines Flight Attendant Threatens To Have People Who Don’t Wear Mask Arrested, Put On No Fly List