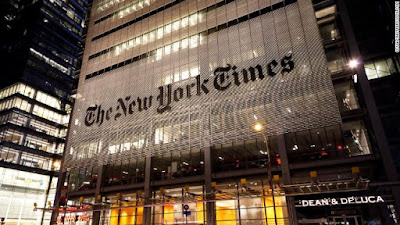 An article in The New York Times takes a generally favorable view of the current Federal Reserve mad money printing that is occurring.

I mean the Times really knows the Fed is printing money out of thin air but presents such madness as perhaps a sound policy for the current situation. The article is titled, How the Government Pulls Coronavirus Relief Money Out of Thin Air, and begins this way:

The United States has responded to the economic havoc wrought by the coronavirus with the biggest relief package in its history: $2 trillion. It essentially replaces a few months of American economic activity with a flood of government money — every penny of it borrowed.

And where is all that cash coming from? Mostly out of thin air.

The traditional view of economic theory holds that governments and central banks have distinct responsibilities. A government sets fiscal policy — spending the money it raises through taxes and borrowing — to run a country. And a central bank uses various levers of monetary policy — like buying and selling government securities to change the amount of money in circulation — to ensure the smooth operation of the country’s economy.

But the relief package, called the CARES Act, will require the government to vastly expand its debt at the same time that the Federal Reserve has signaled its willingness to buy an essentially unlimited amount of government debt. With those twin moves, the United States has effectively undone decades of conventional wisdom, embedding into policy ideas that were once relegated to the fringes of economics.

And then the article features the pro-printing money out of thin air modern monetary theorists:

But the relief package, called the CARES Act, will require the government to vastly expand its debt at the same time that the Federal Reserve has signaled its willingness to buy an essentially unlimited amount of government debt. With those twin moves, the United States has effectively undone decades of conventional wisdom, embedding into policy ideas that were once relegated to the fringes of economics…

Playing out in the background of this shift is a debate over what is known as modern monetary theoryy, which says countries that control their own currency can run much larger budget deficits than they typically do, in part because of the power of central banks to create new money to help finance the shortfall.

And then the Times gives us some MMT logic:

“Once the central bank buys them, it’s as if the Treasury never issued them in the first place,” said Dr. [Stephabie] Kelton, who was an adviser to Senator Bernie Sanders’s 2016 presidential campaign. “For all intents and purposes, they’re retired.”

Do not ask me to explain the Kelton quote. I can’t. It makes no sense. Nothing about the Fed buying a Treasury security suggests that this is a case of the Treasury security never being issued. What goes on is the Fed prints money out of thin air to buy Treasury securities and the Treasury then spends the printed up money in the economy thus putting upward pressure on prices. Rather than being a non-event, it is a method by which those with fixed income and cash savings are damaged.

If the Treasury ever paid back the debt (don’t make me laugh), it would reverse the process. This is not a “never issued them” situation. It is issuing them with a destruction of the value of the dollar event as the consequence.

But the Times has more nice things to say about MMT:

Adherents of M.M.T. have long argued that the United States can — and probably should — run much larger budget deficits than it did already. In recent years, this belief has been most often associated with left-leaning politicians such as Mr. Sanders and Representative Alexandria Ocasio-Cortez of New York.

But the ideas have found broader currency in some unlikely places, such as Wall Street. In recent years, some at huge money management firms and gold-plated investment banks have increasingly turned to M.M.T. as a useful analytical framework to understand the strong links between central banks and markets that have grown since the financial crisis.

And the article closes this way:

Even so, the growing comfort with the Treasury Department’s relying on the Fed to buy its bonds — and help finance large deficits — is an important shift in the conventional thinking of politicians and policymakers, said Mr. McCulley, who retired from Pimco in 2015 and now teaches at Georgetown University.

“What this crisis has brought to the forefront is that this isn’t an academic debate anymore whatsoever,” he said.

Mr. McCulley said the speed with which the crisis took hold — and the unique circumstances of a nearly nationwide lockdown of consumers — meant political leaders had little choice but to vastly expand deficits. And, he said, those who usually question how deficits will be paid for have been rendered mute.

In short, this is New York Times support for MMT by generally quoting experts who support the mad money printing.

It mentions the possibility of price inflation only in passing and quotes no experts and claims:

The CARES Act borrowing is, in many ways, the natural result of an evolution that began with the 2008 financial crisis. The bond-buying programs that central banks undertook around the world helped ensure low-cost financing for governments running giant deficits as policymakers contended with a deep recession and a prolonged period of lackluster growth. And despite constant, high-decibel warnings that such an approach would surely ignite a surge of inflation, it never happened.

But this is a distortion of Fed operations that occurred because of the 2008 financial crisis. As I have pointed out here at EPJ numerous times, a good part of that operation simply resulted in a paper shuffle with the Fed exchanging Fed reserves with banks for securities such as mortgage-backed securities. The reserves given to the banks were kept by them back at the Fed as excess reserves and never entered the system. The current situation is completely different, the money is not being kept as excess reserves at the Fed. It is, as I point out in the EPJ Daily Alert,  entering the economy and blowing up the money supply by record amounts.

The price inflation threat is now greater than at any time since the 1970s.

This New York Times article will not age well.