The New York Times has passed 6.5m subscribers as its digital revenue eclipsed print for the first time, showing the resilience of its online subscriber base even while the pandemic has pummeled the media industry.

From April through June the company added 669,000 new digital subscribers — more than the entire paying online readership of the Los Angeles Times and Boston Globe combined.

While the pandemic has ravaged the advertising market, leading to sweeping lay-offs at news media ranging from BuzzFeed to small local newspapers, the New York Times has continued hiring journalists with the aim of reaching 10m subscribers within five years.

Wednesday’s results left it in a strong position to reach that goal: the New York Times had reached 6.5m subscribers, 5.7m of them online.

The New York Times last month named Meredith Kopit Levien as its new chief executive, replacing Mark Thompson, the former director-general of the BBC who has led the paper through a digital transformation.

Mr Thompson called the results a “key milestone” for the company, after it began charging people to read content on its website in 2011. The company made $189m from digital products, higher than the $175m it made from print subscriptions.

More than any other global news publisher, the New York Times has invested heavily in journalism, helped by the fast growth of its online subscriber base following the election of Donald Trump as president. Its subscription business is the envy of the news industry, which has been gutted by the drop in advertising during the pandemic. 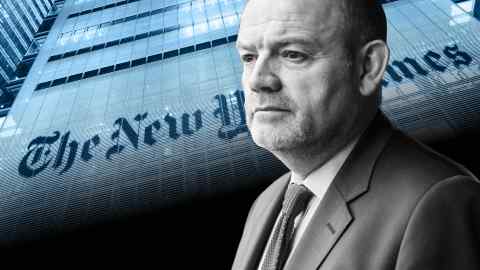 But the impact of the coronavirus crisis left revenues and profits down compared with a year ago, as plummeting advertising sales outweighed the strong subscriber growth.

The company warned that it expected advertising revenue in the third quarter to drop between 35 per cent and 40 per cent, as the pandemic continues to hurt the ad market.

Previous PostChina Will Soon Be Able To Close Off The Straits Of Hormuz And The Red SeaNext PostSE: Fauci Says He Would Expect Pushback on National Mask Mandate