New York could lose 159,000 restaurant jobs due to pandemic

As many as half of New York City’s restaurants could close permanently over the next year due to the coronavirus pandemic, eliminating up to 159,000 jobs, according to an audit issued by the state comptroller.

The report offers a dire assessment of an industry that has been especially hard hit by the pandemic but whose precise financial condition has been difficult to pinpoint.

Based on credit card transactions and other data, the report concluded that about a third of the city’s restaurants and half of its bars that were open before the pandemic have shut their doors.

In a worst-case scenario the state is bracing for the possibility that up to half of New York’s pre-pandemic restaurants could be closed permanently within a year, according to several studies and data sources it has reviewed.

Some of those closures may be temporary, the report acknowledges. It also notes that forecasts do not take into account the return of indoor dining, which began September 30 — albeit at 25 per cent capacity and with other restrictions intended to prevent infection.

Still, Thomas DiNapoli, the state comptroller, painted a picture of an industry under extreme duress.

“The industry is challenging under the best of circumstances and many eateries operate on tight margins. Now they face an unprecedented upheaval that may cause many establishments to close forever,” Mr DiNapoli said.

Sharon Lee, the Queens borough president, called it “a race against time” for restaurants.

Restaurateurs have praised the city government for allowing them to expand outdoor dining during the pandemic. But they have repeatedly argued that federal support will be necessary to save an industry that is essential to the city’s character.

“Many in the industry are on life support and barring government assistance, a majority of restaurants may face closure by year’s end,” said Melissa Autilio Fleischut, president of the New York state restaurant association.

Heading into the pandemic, the restaurant sector was a robust engine for New York City’s economy and a plentiful source of jobs — albeit low-paying ones — for immigrant workers.

In 2019, the city boasted 23,650 restaurants, up 44 per cent from a decade earlier. Most were small establishments, employing 20 people or fewer. Altogether, they accounted for 317,800 jobs and generated nearly $27bn in taxable sales. 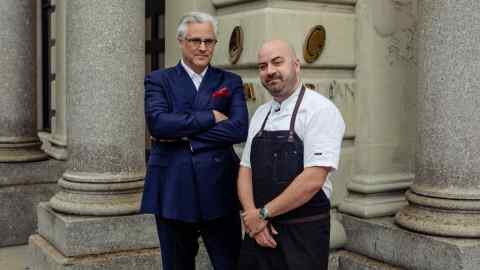 Employment collapsed to 91,000 jobs in April as the city went into lockdown. It recovered somewhat as restaurants adapted by offering outdoor dining and takeaways, among other measures.

Yet, as of August, employment was just 174,000, or 55 per cent below its pre-pandemic level in February. The permanent closure of half the city’s restaurants would translate into a loss of 159,000 jobs, the report said.

The job losses have fallen disproportionately on immigrants, the report found, and neighbourhoods in Queens and Brooklyn that also suffered the highest Covid-19 fatalities.

Even with the return of indoor dining, several restaurateurs have warned that it would be impossible for them to cover their costs. They are also worried that rising infections could prompt another lockdown.