New US jobless claims fall more than expected to 712,000

New US jobless claims fell more than expected last week while remaining at historically high levels, as some states reimpose curbs on businesses in response to record increases in coronavirus cases and hospitalisations.

Initial applications for unemployment benefits dropped to a seasonally adjusted 712,000 from 787,000 the previous week, the US labour department said on Thursday. That was lower than economists’ forecast of 775,000 claims, and almost even with a pandemic-era low of 711,000 recorded earlier this month.

The number of Americans actively collecting state jobless aid totalled 5.5m in the week that ended on November 21, compared with 6.1m the week before and a consensus estimate of 5.9m. Continuing claims have fallen from 12.7m in mid-September, although economists have partly attributed the decline to unemployed workers exhausting regular benefits.

The insured unemployment rate, considered an alternative measure of joblessness, fell to 3.8 per cent from 4.2 per cent.

The latest figures come days after a government watchdog said inaccurate jobless claims data could complicate policymakers’ efforts to respond to the economic impacts of Covid-19. In a report on Monday, the Government Accountability Office said the labour department’s weekly reports had offered “flawed estimates of the number of individuals receiving benefits each week throughout the pandemic”.

“The number of claims has not been an accurate estimate of the number of individuals claiming benefits during the pandemic because of backlogs in processing a historic volume of claims, among other data issues,” the GAO said.

The agency also said figures for Pandemic Unemployment Assistance claims had been affected by inconsistent data reporting by states, most of which had underpaid participants in the programme.

The PUA programme, which offers benefits to the self-employed and others who would not qualify for regular benefits, tallied 288,701 new claims last week on an unadjusted basis, compared with 318,855 a week earlier.

Federal Reserve officials have warned that the labour market’s recovery could stall without additional fiscal support from Washington, with lawmakers still at odds over the scope of another relief bill as states reimpose tighter restrictions on businesses. A bipartisan group of senators put forward a $908bn spending proposal this week in an attempt to rekindle negotiations for a deal between Republicans and Democrats. 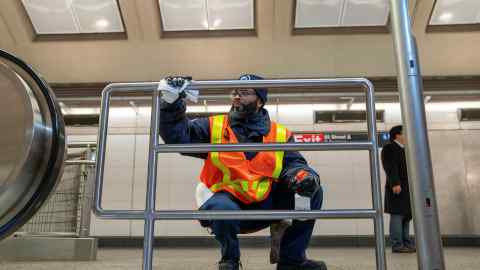 The US has also battled a jump in coronavirus cases and hospitalisations in the autumn, prompting a new round of restrictions that are likely to result in fresh lay-offs.

Fed chair Jay Powell said on Tuesday the economic recovery had been “faster” than anticipated but noted that employment remained below pre-pandemic levels.

“We can both acknowledge the progress and also point out just how far we have left to go,” Mr Powell told lawmakers during a hearing before the Senate banking committee.

“We’ll use our tools until the danger is well and truly passed, and it may require help from other parts of government as well, including Congress,” he added.

The labour department will publish November jobs data on Friday. Economists estimate that employers added 469,000 jobs in November, compared with 638,000 in October.

The US has recouped more than half of the 22m jobs lost in March and April during the height of coronavirus-related shutdowns.

The jobless claims report showed that 20.2m people were claiming benefits in all state and federal programmes as of November 14, down from 20.5m, according to unadjusted figures that are reported on a two-week delay.