U.S. West Texas Intermediate crude oil futures erased all of its early gains and are now in a position to finish the week lower amid an escalation of the trade war between the United States and China, and uncertainty over Federal Reserve policy.

After trading sideways-to-higher most of the week, prices were flat early Friday as traders prepared for a keynote speech by Federal Reserve Chairman Jerome Powell that could set the near-term tone of the market.

Traders were expecting a quiet trade until 14:00 GMT when Powell is scheduled to deliver his speech at the central bankers’ symposium in Jackson Hole, Wyoming. However, volatility hit the market and prices plunged unexpectedly after China said it will slap new tariffs on U.S. goods.

According to reports, China said it would retaliate with new tariffs on another $75 billion worth of U.S. goods, including autos. The tariffs will range between 5% and 10% and will be implemented in two batches on September 1 and December 15.

Powell to the Rescue?

Fed chief Powell is expected to provide clues on whether the Fed will cut interest rates for a second time in two months to perk up the economy and prevent a global recession.

Simply stated, crude oil prices are likely to fall even further if Powell comes across as dovish by reiterating the Fed’s “mid-cycle adjustment” narrative. This refers to the central bank’s 25-basis point rate cut in July, which according to policymakers was not the beginning of a series of rate cuts.

At this time, the markets have priced in a 25-basis point rate cut for September and as many as four more over the next 12 months. Powell will have to match this assessment with clarity and conviction in order to convince the markets that the Fed is serious about extending the current expansion.

Crude prices could claw back some of its earlier losses today if Powell is hawkish and supports additional rate cuts. However, gains could be limited as long as there are lingering worries over U.S.-China trade relations. Both the International Energy Agency (IEA) and the Organization of the Petroleum Exporting Countries (OPEC) have cut demand growth forecasts due to risks to the global economy from the trade war between the two economic powerhouses.

Continuing to provide support are the OPEC-led production cuts and simmering tensions in the Middle East. Rising U.S. production, however, is coming close to offsetting the cuts in output although there is talk of a future reduction of OPEC production.

Helping to support the market are simmering tensions between the United States and Iran, with Iranian President Hassan Rouhani cautioning Washington against tightening pressure on Tehran.

In a veiled threat, Rouhani said on Wednesday, if Iran’s oil exports are cut to zero, international waterways will not have the same security as before.

For a number of weeks, declining crude oil inventory has helped prop up prices. Crude stockpiles decreased 2.7 million barrels during the week ending August 16, a bigger drawdown that the 1.9 million barrels.

While another drop in crude inventory was supportive this week, these gains were erased by a rise in refined product inventories. The EIA report showed bigger-than-expected builds in U.S. fuel inventories for the week-ending August 16. Gasoline stocks rose by 312,000 barrels, while distillate supplies grew by 2.6 million barrels.

“It looks like gasoline demand has peaked for the season, and will only trend lower from here,” said John Kilduff, partner at energy hedge fund Again Capital Management in New York. 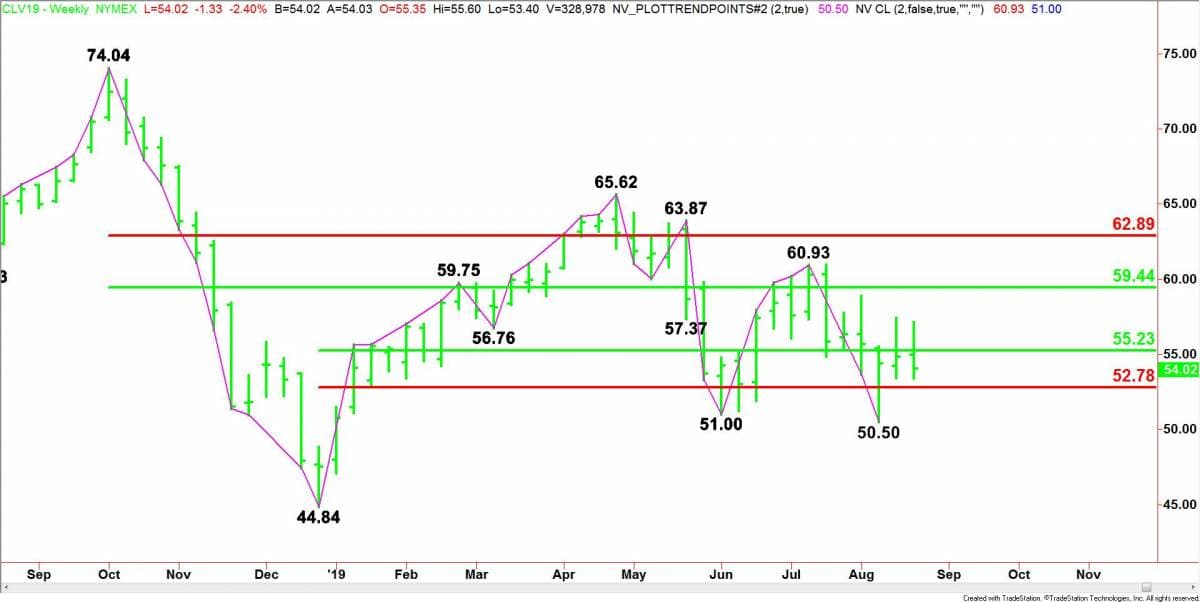 The main trend is down according to the weekly swing chart. A trade through $60.93 will change the main trend to up. A move through $50.50 will signal a resumption of the downtrend.

The minor trend is also down. A trade through $57.40 will change the minor trend to up. This will also shift momentum to the upside.

Based on this week’s price action, the direction of the market next week is likely to be determined by trader reaction to the minor 50% level at $55.23.

A sustained move over $55.23 will indicate the presence of buyers. If this move can create enough upside momentum then look for buyers to make a run at $57.40. Taking out this level will shift momentum to the upside, which could lead to an eventual test of $59.44.

A sustained move under $55.23 will signal the presence of sellers. The next target is $52.78. Taking out this level could extend the break into $50.50. This price is a potential trigger point for an acceleration to the downside with the next target the main bottom at $44.84.

The announcement of new tariffs by China will put added pressure on Fed chief Powell to deliver a powerful message that the Fed will do whatever it takes to keep the economy expanding and to prevent a global recession.

Prices could edge higher if Powell comes across as dovish, but if he misses or fails to deliver his message with clarity and conviction, crude oil is likely to continue to weaken under $52.78.