New Residential Investment Corp.’s (NRZ) Q1 earnings release provides new information regarding the impact that the coronavirus pandemic and its effect on global markets had on the company’s operations. Book value is down, but that was to be expected and is not a big surprise.

New Residential also made some changes to its business model, choosing to focus more on its operating businesses instead of owning higher-yielding financial assets. This strategic shift should help lessen the impact that market volatility has on the company, and thanks to the fact that the housing market continues to do well, New Residential’s operating businesses should generate ample profits.

New Residential’s shares are not looking as inexpensive as they did during the peak of the current crisis, but they still trade below book value. Historically, buying New Residential below book value has turned out well, although some uncertainties regarding the company’s future profitability remain in place, which is why the stock may not be the right choice for all investors. 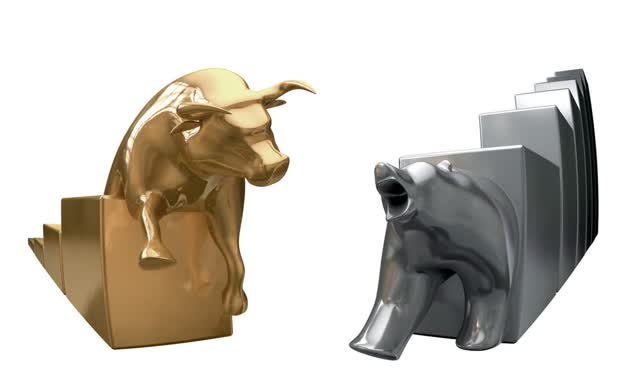 In The Middle Of A Financial Storm

Once the coronavirus crisis really got into everyone’s focus and it became clear that there would be a tremendous impact on people’s lives and on the economy, highly levered financial corporations that invest in higher-risk assets got into a lot of trouble. This included New Residential, which is why its share price dropped to as low as $2.91 in early April from a 52-week high of $17.66 in February.

This massive share price slump was based on liquidity problems at New Residential, as well as at many other mortgage REITs (REM) (REML). The value of the assets these mREITs held declined, which led to margin calls by the banks and counterparties that financed a hefty portion of the assets these mREITs held. This, in turn, made many mREITs liquidate assets at any price in order to pay back lenders to avoid further margin calls, which, in turn, made asset prices drop further, thus creating a vicious cycle. The forced selling of some assets at rather low market prices hurt the book values of many of these mREITs, which was the first factor that explains the massive share price drops.

On top of that, the market increasingly started to price in increasingly disastrous scenarios for many of these mREITs, even expecting a potential bankruptcy from weaker players such as New York Mortgage Trust (NYMT). As it turns out, the worst of these fears were not substantiated, which has made the share prices of many of these mortgage REITs recover substantially.

New Residential shares, for example, have risen by a massive 160% from the 52-week low already, leading to massive gains for those that had the courage (and the luck) to buy at the bottom. The fact that the share prices of New Residential and many of its peers have recovered substantially from the lows does not change the fact that the current crisis has left a big mark on these companies, and it is not yet certain when (or if) share prices will rise to pre-crisis highs.

In New Residential’s case, the crisis has accelerated a strategic shift that was already in motion earlier. The company’s “old” business model was centered on holding high-yielding financial assets, primarily excess mortgage servicing rights. The REIT also held other assets, such as call rights, consumer credit, and many more. As New Residential was mostly targeting yields in the 12-15% range with these assets, it is quite clear that those were not low-risk investments that the company was making – government bonds or traditional mortgages do not nearly pay this much. 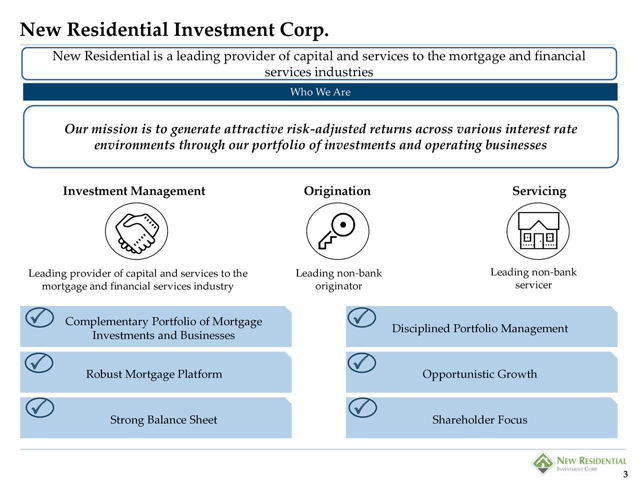 In the above slide, which was released during the Q1 earnings call, management clearly points out that New Residential’s operating businesses will play a more important role in the company’s future. The company describes itself as the leading non-bank originator and the leading non-bank servicer of mortgages, while the portfolio of mortgage investments is described as complementary.

In part, this change in how management describes the business model may be caused by a desire to display the company as less entrenched in higher-risk investments during times when the market is suspicious about those. This is surely not the only reason why management is putting more focus on its operating businesses, though, as New Residential clearly has indeed experienced a shift away from the portfolio-focused mortgage REIT model. 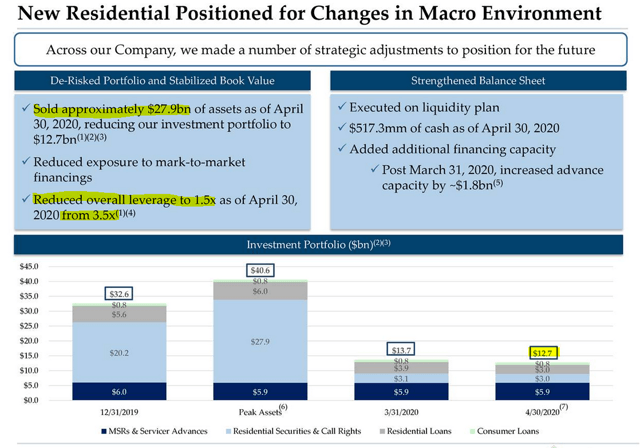 In the above slide, we see the massive changes New Residential has made to its asset portfolio during the last couple of months. It has sold almost $28 billion worth of assets, bringing its total portfolio down to around $13 billion, which equates to a reduction by around 70% from the peak level. This has led to a massive reduction in the company’s leverage, which has dropped by more than 50% to just 1.5 as of the end of April. On top of that, the selling of most of New Residential’s residential securities and call rights has reduced the mark-to-market exposure significantly. Meaningful book value drops, like the one experienced at the end of Q1, have thus become much less likely going forward, especially since volatility in these assets (and thus, the potential for mark-to-market losses) has declined as well, mainly thanks to the Fed’s stabilizing efforts.

Now, of course, one could argue that the timing of exiting these assets was not great at all, as New Residential basically liquidated many of these assets during the period when the market prices for these assets were especially bad, which resulted in hefty realized losses. Hindsight is 20/20, though, and I would not hold too much of a grudge against management for not foreseeing a global pandemic that has thrown markets off a cliff.

Since New Residential has made these drastic changes to its business model, it makes sense to ask what profitability might look like in the future. Management explains that profits from the operating businesses should total $300-400 million in 2020, despite the coronavirus impact. Using the lower end of this, and assuming that profits might be 10% higher in a more normal environment, we get to baseline profits of around $330 million for the operating businesses alone. New Residential’s asset portfolio, meanwhile, will continue to generate at least some profits on top of that, even though profitability will not be as strong as it used to be, due to the big reduction in the portfolio’s size.

Per the appendix in the investor presentation (page 27), New Residential generated net interest income of $216 million in Q4, before the asset portfolio was partially liquidated. Doing a (conservative) back-of-the-envelope calculation where we assume that the size of the asset portfolio declined by two-thirds and that the net interest margin will drop by 30% in the long run, net interest income would total $50 million per quarter. This would equate to $200 million per year, which, added to the $330 million in operating earnings, would lead to company-wide profits of $530 million annually. This compares quite favorably to New Residential’s current market capitalization of $3.1 billion, as the earnings multiple stands at just 5.8, which equates to an earnings yield of ~17%.

Compared to the analyst community’s expectations, these estimates are not overly bullish at all:

The current consensus estimate sees the company earning $1.58 per share in 2021, which equates to a P/E ratio of just 4.8, or an earnings yield of ~21%. In our (rather conservative) scenario, New Residential is thus roughly 20% less profitable compared to what the analyst community is currently forecasting, and yet, even in this scenario, the shares do not look expensive at all.

New Residential shares also do not look expensive relative to their book value, which stood at $10.71 at the end of Q1 and which has not changed meaningfully since, according to management during the earnings call:

We want to note that book value has changed drastically during Q1 due to mark-to-market losses and realized investment losses, thus there is no guarantee that book value will remain above $10 in the future. On top of that, putting a fair value on New Residential’s MSRs is not an easy task, and we more or less have to trust that management is coming up with correct values in its reports. We cannot independently verify whether all assumptions and inputs are correct, thus there is the possibility that book value is either over- or understated. In the past, management has guided New Residential well, and we do not see a reason to expect any manipulation, but investors should nevertheless keep in mind that coming up with the correct book value is not the easiest task in this case.

New Residential Investment Corp., like many of its peers, was hit hard by the current crisis, mainly due to the fact that there were substantial failures in credit markets in late March, not so much due to issues with the underlying mortgages themselves. Management has decided to accelerate the shift towards operating businesses during this crisis, and New Residential’s balance sheet has shrunk substantially.

We estimate that the company will nevertheless generate ample profits going forward, even though we are more conservative than the analyst community. Shares are looking quite inexpensive, and with credit markets having stabilized, the economy reopening, and the Fed basically backing up markets everywhere, we believe that the worst may be behind New Residential. This never was a low-risk stock, and it still isn’t, but for enterprising investors, the stock could still be a solid buy when they have a long-term focus. Thanks to a low valuation and compelling future profitability, total returns could be quite attractive over the next couple of years if things go as management indicates.

Author’s Note: If you enjoy my writing and want to read more from me, click the “Follow” button at the top of the page, or the “Like this article” button below. 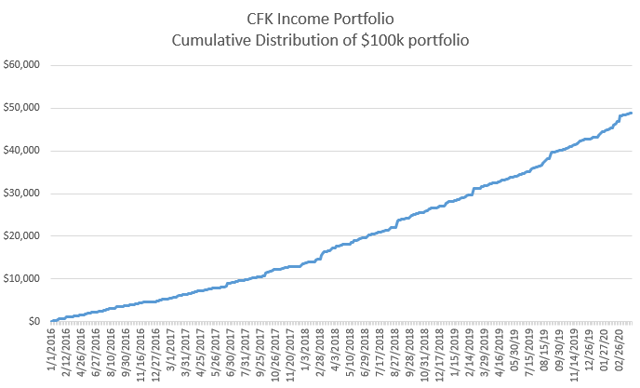 The primary goal of the Cash Flow Kingdom Income Portfolio is to produce an overall yield in the 7% – 10% range. We accomplish this by combining several different income streams to form an attractive, steady portfolio payout. The portfolio’s price can fluctuate, the income stream not so much.