New Lessons From Alameda County, California on How to Destroy the Local Restaurant Industry

Home Financial news New Lessons From Alameda County, California on How to Destroy the Local Restaurant Industry
2020-07-122020-07-12By finanz.dk 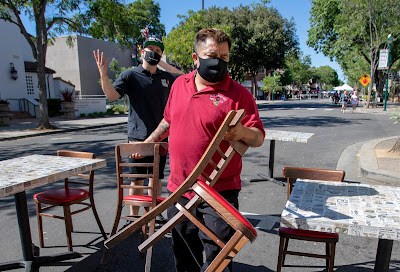 Alameda County in California borders San Francisco and includes the city of Oakland.

Like most Bay Area counties, it locked down most businesses, without sound scientific reasoning, to “battle” COVID-19.

The lockdown resulted in some marginal business, including some restaurants, closing down for good. It was a sad thing to see.

But the county has been slowly coming back to life, with outdoor dining allowed a couple of weeks back. This was taken as a signal by many restauranteurs to take down the boarded-up windows, used to protect against the BLM rioters who weren’t on lockdown, and start-up again.

It appears that some restauranteurs even bought new tables and chairs for outside dining. I asked one matter d’ how it was going. His answer, “You have to crawl before you can walk.”

And then it happened again.

The hard lockdown was back on.

Alameda County health officials abruptly pulled the plug on outdoor service at restaurants, wineries and bars Friday night after updated state guidance rolled back that permission for counties without a variance.

Restaurants, wineries and bars must immediately halt all outdoor operations, according to a statement from the Alameda County Public Health Department on Twitter at 9:12 p.m. Friday night. Those businesses may open for drive-through, pickup and delivery only…

Alameda opened outdoor dining June 19. “At that time many other counties had applied for a variance alongside or shortly after opening outdoor dining without consequences, and Alameda County took that same approach,” officials said in the release.

“At that time the State did not differentiate dining guidance by indoor/outdoor as it now does,” said Neetu Balram, public health manager for Alameda County, in an updated release Saturday morning. “With the new guidance dated yesterday and enforcement actions observed last week in Santa Clara County, the State is demonstrating a new approach.”…

Now the county is one of just two in the state without those permissions, along with Imperial County in southern California. That will soon change, according to the release: Alameda County “is moving towards obtaining a variance” and a letter of agenda supporting it is on the agenda for next Tuesday’s Board of Supervisors meeting…

Health officials also cautioned that approval of the variance “is not an indication that we will pursue additional re-openings” of other sectors and activities.

You really have to wonder how much of this abuse restauranteurs can take, with a hard closing Friday night that means food bought for weekend dining is waste. In addition, to the cancellation of hours for some cooking and wait staff.

Do I need to point out that anyone dining outside is most assuredly not in a high-risk category even if they caught COVID-19? This is yet another mini-Mao act by the state and county–and yes the county, there have been some inland counties that have just ignored the mad orders of Califonia Commandant Newsome.