New Gold: On Track For An Earnings Breakout Next Year (NYSEMKT:NGD)

It’s been a volatile couple of months for the precious metals sector, but while the Gold Juniors Index (GDXJ) has given up more than half of its year-to-date gains, New Gold (NGD) has continued to hold onto its triple-digit return. The significant outperformance is due to what looks to be the early innings of a successful turnaround at the company’s Rainy River Mine and a much brighter year ahead in FY2021. This is because not only will we see increased metals production and lower costs next year, but the company will not be weighed down by gold hedges, which have kept a ceiling on New Gold’s average gold (GLD) selling price. Based on an expected return to profitability in FY2021 and the potential for significant margin expansion, I would view any pullbacks below $1.50 as buying opportunities.

New Gold released its Q3 results earlier this month and reported quarterly gold production of 115,500 gold-equivalent ounces (GEOs), a 10% decrease from the same period last year. This was due to a sharp decrease in gold production at the company’s flagship Rainy River Mine, resulting from significantly lower head grades of 0.88 grams per tonne gold vs. 1.14 grams per tonne gold in the year-ago quarter. However, the higher gold price allowed the company to grow quarterly revenue by 3% year over year from Q3 2019, and all of the key capital projects at Rainy River are now finally complete. This significant milestone, combined with a higher gold price and no further hedges after December, has New Gold on track to report its first year of positive annual earnings per share in FY2021 after two consecutive years of net losses per share. Let’s take a closer look at the results below:

As shown in the chart above, we’ve seen minimal progress from an output standpoint for New Gold over the past few years, with Rainy River continuing to underperform its initial mine plan. Based on the 2014 Feasibility Study, the mine was expected to produce an average of 325,000 ounces of gold annually at all-in sustaining costs below $800/oz. Instead, we’ve seen the mine struggle to deliver more than 260,000 ounces per year at all-in sustaining costs below $1,250/oz. However, the updated mine plan, which has focused on optimizing profitability, should lead to a dramatic improvement from the performance the past three years, with the mine expected to deliver over 275,000 ounces of gold per year (~289,000 gold-equivalent ounces) at all-in sustaining costs below $1,000/oz. While this is a country mile from the 2014 projections, it is a return to profitable operations which New Gold is desperate to play catch-up to its peers given its relatively high debt and past two years of net losses per share. 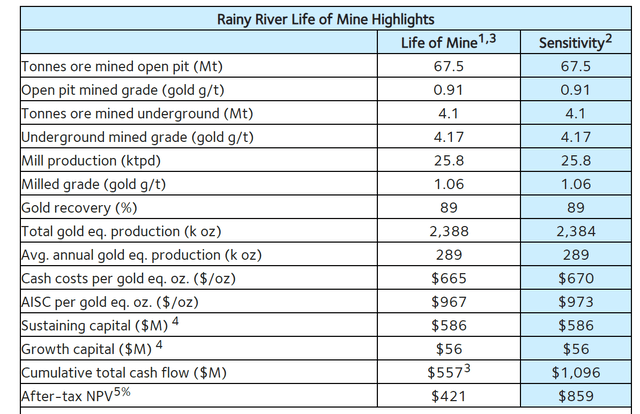 Some investors might not be all that impressed with the Q3 production metrics of 63,000 ounces following the announcement that gold production would be increasing to roughly ~69,000 ounces per quarter with the new life of mine plan. However, it’s important to note that grades were down considerably year over year, but other key operating metrics have improved materially. In fact, throughput hit a new record of 26,998 tonnes per day during the quarter, and the plant processed over ~2.48 million tonnes of ore in Q3, a more than 10% improvement year over year. Therefore, if not for the reduced grades, this would have been an exceptional quarter for Rainy River.

As shown in the chart below, gold grades have been steadily trending lower over since FY2018 and came in at 0.88 grams per tonne gold in Q3. However, the mine plan is calling for an average gold grade of 1.06 grams per tonne gold, which sits 20% higher than Q3 levels. Therefore, if we can see grades increase closer to the mine plan, which should begin once New Gold heads towards higher grades zones in Q4, we could see 67,000-70,000 ounces of gold production per quarter going forward. This would be a massive improvement from the trailing twelve-month average of ~53,300 ounces. This should be sustainable, as the company targets higher grades once underground mining begins in late 2021. New Gold has currently completed 150 meters of a planned 550 meters of its decline towards the Intrepid Zone and is on track for underground production in 2022.

While the headline Q3 results at Rainy River weren’t that inspiring with lower gold production and another quarter of extremely high costs ($1,469/oz), the significant increase in throughput is actually quite positive. Besides, it’s important to note that costs should decrease materially going forward, as the company benefits from over 66,000 ounces of gold sales per quarter (Q3 2020: ~60,600 ounces), as well as significantly less sustaining capex after two very capital-intensive years to turn around operations. Over the past nine months, $96.6 million in sustaining capital has been spent at Rainy River. This is more than 35% above the estimated annual sustaining capital of ~$71.1 million over the mine plan. Given that the key capital projects are complete, Rainy River should not only benefit from higher gold sales, which will reduce costs, but also much lower capex going forward. Therefore, I would not be surprised to see all-in sustaining costs drop below $1,150/oz in FY2021, which would be a very welcome development for a mine that’s struggled to generate any cash flow the past two years.

Despite the weaker quarter operationally, New Gold managed to increase its quarterly revenue, reporting $173.7 million in revenue in Q3. This translated just over a 3% increase from the $168.4 million reported in the year-ago period, due to a higher average realized gold price of $1,613/oz. However, if not for the hedges that the company has nearly extinguished, revenue would have been closer to ~$200 million and near a record high, given that the average gold producer reported an average realized gold selling price above $1,850/oz in Q3. Therefore, while we shouldn’t see a huge improvement in sequential revenue growth with 16,000 ounces of gold hedged for November and December, we should see a massive improvement in Q1 of next year, when the hedges are no longer a headwind. Fortunately, this is having a positive impact on annual earnings per share (EPS).

As shown in the chart above, New Gold has had one of the ugliest earnings trends in the sector and is one of the only companies that’s been unable to post a new high in annual EPS in FY2020. However, FY2021 annual EPS estimates are currently sitting at $0.16, while FY2021 annual EPS estimates are now as high as $0.26. Assuming the company can hit these forecasts, we should see an earnings breakout year in FY2021, followed by ~60% annual EPS growth in FY2022. This is a massive improvement that is beginning to justify the share increase we’ve seen in the share price. However, at a share price of $1.83, New Gold is now trading over ~11.0x FY2021 annual EPS, which is no longer cheap. This is because we have some million-ounce producers trading for below 13x annual EPS with much better margins than New Gold, which are also paying very attractive quarterly dividends.

READ ALSO  How to use your iPhone's health-tracking features 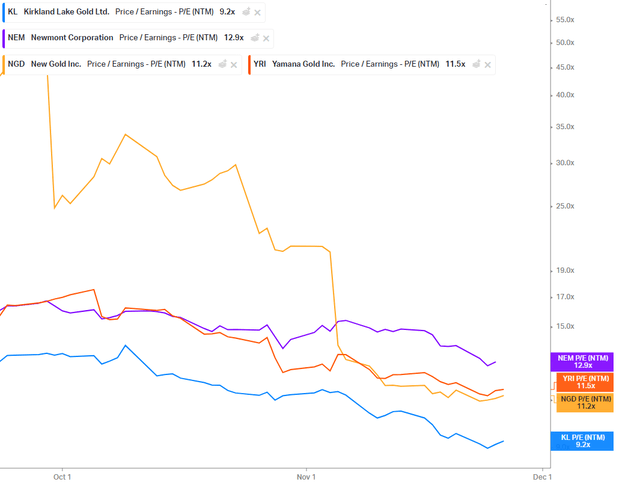 Just because New Gold is trading above the valuation above its peers with better yields and better margins does not mean it can’t go higher, but I would argue that there is better value out there currently. Therefore, while this is a compelling turnaround story, and we could certainly return to the $2.25 level in the next 12 months for New Gold, I don’t see much of a safety margin above $1.85 for new purchases. For this reason, if I wanted to add to a position or begin a new position in the company, I would be looking for dips below $1.50 to do, which would place the stock at closer to 9x FY2021 annual EPS estimates.

New Gold is getting set for a strong turnaround in FY2021, and this should put a floor under the share price at $1.45 going forward, given that FY2021 estimates are sitting at between $0.16 and $0.20, and the stock is on track for an earnings breakout year. However, after a more than 100% year-to-date return while many peers have been under pressure, it’s hard to argue that the stock is still cheap here. Therefore, while I see the continued improvements at Rainy River and sharp margin expansion ahead as bullish developments, I believe there is better value out there in the sector currently. Having said that, if we were to see a pullback below $1.50 for New Gold, I would view this as a low-risk buying opportunity.