Netflix (NFLX) is the streaming leader. It aims to be the must-have platform and for Q2 it was just that — as alternatives were either offline or closed.

Ultimately, it’s very difficult to find any further upside potential. Even though momentum is still highly likely to build up steam and carry this very hot stock higher. What this one from the sidelines.

I’ve been bearish Netflix for a considerable amount of time. And even though this quarter would be another quarter to add fuel to bears, I can also see the other side of the equation — the bullish thesis.

In comparison, if we look back to Q1 2019, during that quarter Netflix reported 22% revenue growth rates, only to come back and reaccelerate its growth rate substantially. At the time of Q1 2019, I felt that the end had to be near, and since that time, Netflix’s share price has continued to increase.

Consequently, for all the commentary that Netflix had pulled forward revenue from future quarters and that looking ahead Netflix would see its growth spluttering off, that does not appear to be the case.

Subscriber Numbers, Are They Still Relevant?

For a long time, Netflix used to trade off subscriber numbers, however, I do not believe that to be as important right now as it was in the past. Why? Because most Netflix’s shareholders understand that Netflix has largely saturated the United States and Canada (‘UCAN’) market and that meaningful addition will now come from outside these markets.

Consequently, I believe that investors are now looking more towards top-line growth rates rather than the total number of net member adds.

Of course, many bears immediately note how Netflix can’t stop investing in high-quality expensive content to keep members on its platform, and that this level of 1x cash content-to-content amortization ratio is unsustainable.

Netflix declares that Netflix is nowhere near maturity and that there is no point taking the foot off the pedal right now, that the entertainment market is large and that rather than Netflix being overly concerned about the competition it would rather carve out its own path. So far, Netflix has succeeded here, and there’s no reason for it to slow down.

Put another way, Netflix’s 15% free cash flow profile is likely to be a mirage but investors are unlikely to be fazed by Netflix’s poor cash generation profile.

Valuation — Does It Actually Matter? 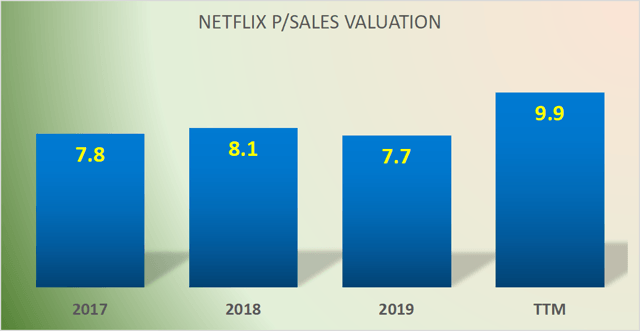 With the passage of time, Netflix’s valuation continues to trade at an ever-increasing multiple. Even though we know that Netflix’s revenue growth rates are starting to slow down over time, investors are willing to bid increasing multiples for the company.

For some investors, the fact that Netflix’s has minimal content library is concerning, but it does not appear to be a big enough concern to keep investors from chasing its stock higher.

What’s more, we have to recognize that Q2 2020 was essentially the perfect storm for Netflix where it had minimal competition, and ‘all’ households locked at home with few entertainment alternatives.

Looking ahead, a very different landscape will start to emerge, with sports making a comeback, as well as, Disney (DIS), Apple (AAPL), NBCUniversal (CMCSA) launching Peacock, and innumerable other competitors too, coming to join the fray.

The video together with the article reminds us of the key dynamics at play with Netflix. Q2 2020 was a quarter where everything that could go Netflix’s way played out, with households at home, and the competition still largely dormant. Now, the real showdown is starting to unfold.

With its valuation relatively high, and still a considerable amount of time before Netflix starts to generate positive free cash flow, investors are hoping that this streaming leader can continue to positively impress the Street. However, I will continue to watch this one for the sidelines.

Investing is about growing our savings and avoiding risky investments. Being highly selective when choosing a diversified portfolio of opportunities.

I do the hard work of finding a select group of stocks that grow your savings.