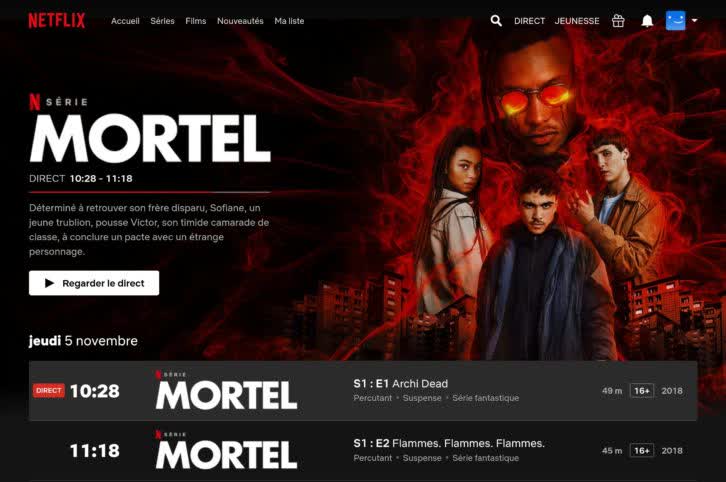 While that statement may be surprising, what might be even more of a shock is its potential savior…Netflix (NASDAQ:NFLX).

That’s right, the streaming leader that is single-handedly responsible for rapidly escalating the decline of the linear model could actually be the one to help come to its rescue…with a twist. So what does that mean to investors in the company and to those in the streaming space?

First, as always, some background.

This week, Netflix announced plans for Netflix Direct, a new offering launching in France that will consist of a linear feed populated by content from Netflix’s various programming. While it is only available through Netflix’s online portal (for now), the fact it is even coming is a big deal.

It is also a big deal because of the justification Netflix used for even creating this service.

“Many viewers like the idea of programming that doesn’t require them to choose what they are going to watch.”

The company went on to say France was chosen because the “consumption of traditional TV” was seen as more important to those viewers. While you can make the argument that conclusion is not the same in the States, in reality it actually might be strikingly similar. The underlying core of this experiment is evergreen throughout all users – Netflix has so much content it can get overwhelming.

Netflix even indirectly acknowledges that fact while at the same turning it into a positive.

Keep in mind there is also precedent here as Pluto TV – a streaming service made up entirely of programmed channels – has seen strong success, leading to an acquisition by Viacom (NASDAQ:VIAC). In terms of this approach resonating with consumers, in general, that network’s achievements show we are well past the proof-of-content stage. In fact, it is likely because of those achievements that we are seeing this test by Netflix on the international front.

And some may ask why international?

Investors have long realized the room for expansion in North America is more limited than that of overseas, so what Netflix is doing is taking trends from other countries and adjusting its overall roadmap, resulting in these type of tests.

Remember the Adam Sandler experiment? Netflix saw globally Sandler was a big draw so it went out and made an exclusive deal with him for next content. It’s the same thought here in that if it works in France, it could be expanded out – including to the US.

To break it down further, look at it like this – say you subscribe to Netflix but don’t really watch it – it’s there for when you want it, but it may not be your first choice. To Netflix, that’s fine as you are paying for it, plus it can count you as a subscriber and move on.

However, if it can get you to watch now, you are even more important. All of a sudden your two-minutes watching something – which under its ratings system is all it needs to justify counting it – gives it more viewership numbers to tout – watching on a linear channel would give the same result.

It’s not so much you are “signing up” for Direct, it’s that you are watching AND more specifically you are watching what Netflix wants you to watch so it can pad its numbers. Netflix is basically taking the choice away from you and I’m not saying that as a negative. Netflix has so much content coming constantly, it is easy to miss something, and this way you may be more prone to watch it.

Keep in mind Netflix also wouldn’t necessarily be limited to one linear channel either – it could eventually go the Pluto route and do multiple channels all with different types of programming. One channel can be movies, one can be TV series, one can be originals and so on…or you can just marathon a series over and over again.

The options are endless.

This also isn’t the first time we’ve seen a test like this with the same type of simplification end goal. Not long ago Netflix introduced “Shuffle Play,” which was another smart innovation. “Shuffle Play” gave a select group of users the option to have Netflix randomly pick something to watch. In addition there was a variation that went deeper where some could select a show and have an option for a random episode.

All of these ideas were (and are) a great example of Netflix utilizing its content in various ways and not resting on its own laurels. Don’t be surprised if others in the streaming industry eventually begin to follow a similar approach as there is some real value here.

We can actually go even deeper as while Netflix’s “all-at-once” model remains a big draw for subscribers, giving people who want a one-at-a-time approach, a new option can also work. If you put an episode of The Crown on a linear feed every week at a certain time you are drawing in a new audience who may not have been watching before – but more importantly you are also giving them a shared experience.

That’s one thing Netflix programming lacks because you don’t know who is where in a season. If you know Crown is airing every Monday night at 9pm, then you can engage with other Crown fans in real-time and expand the base of the show. And if some of those fans want to jump the gun and stream the whole thing at once so be it – either way Netflix is further building its numbers.

Again, it’s not just about getting you to subscribe to Netflix, it’s about getting you to watch Netflix. That’s a major distinction and the key to this and other test runs. Choice is a powerful thing but helping to narrow down that choice can prove to be very successful to both the network and its subscribers.