Netfin-Triterras: A Fantastic De-SPAC Opportunity In The Fintech Space (NASDAQ:NFIN)

Netfin (NFIN) is a blank check company incorporated in April 2019. It had a $255M SPAC IPO in August 2019. As their management team had vast experience in both capital markets and fintech space, their focus was to target a fintech business.

On June 29, 2020, Netfin Acquisition Corp. signed a non-binding letter of intent (LOI) with Triterras Fintech and Triterras Holdings to take Triterras public. Triterras Holdings was originally a commodity trading business founded in 2012 under the Rhodium banner. The business developed a trade finance fintech platform called Kratos in 2019 to facilitate commodity trading among SMEs (Small and Medium Enterprises) and lenders. The initial volume in the platform was seeded through their Rhodium business and the strong network effects resulted in more and more SMEs and lenders joining the platform in a short period of time. The adoption rate was stunning in that within the first nine months of launch, they had over $4B of transaction volume.

Netfin announced a definitive agreement to combine with Triterras on July 29, 2020. While the deal progress appeared smooth, there was one substantive change from their original LOI announcement – it excluded the Rhodium physical commodity trading business. That meant the deal was now for a pure fintech business in the trade finance space. The indicative Enterprise Value also came down from ~$995M to ~$675M. The transaction was expected to close in the fourth quarter and last week they announced the meeting to vote for approval of the business combination for November 10, 2020. If approved, the business would be renamed Triterras and should start trading under the new ticker TRIT on Nasdaq.

Note: compared to most other equity investment opportunities, SPACs have a unique property that there is a built-in downside protection – the redemption rights allow exiting when the deal closes, if they don’t like the deal. Also, when evaluating SPACs (especially those that are yet to announce a deal), it is critical to look at the expertise of their management team, as you are betting on that team’s ability to come up with a good target.

To analyze the structure of the deal, the best place to start is the transaction summary sheet usually published at the time of the deal. 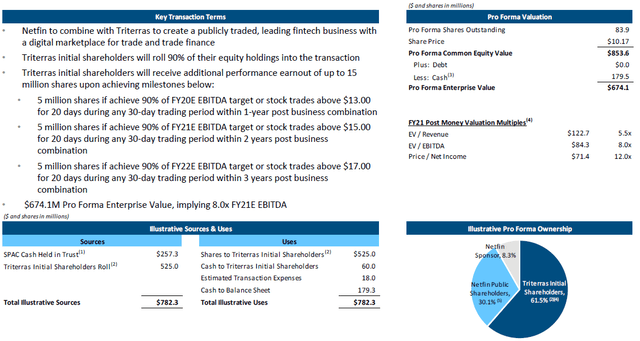 Here are the key items gleaned from the presentation:

A little background on the business need Kratos addresses is in order. Trade finance is the process of funding physical commodity trading conducted across international borders. Cross-border trading typically has a 150-180 day cycle. This implies that producers must not only go through all the processing involved in conducting cross-border trade but also must wait 150-180 days to get paid. The primary role of a commodity trader is to facilitate this transaction. Their value-add includes the following:

The commodity trading community has few large players (Cargill, LDC, Gunvor, Glencore (OTCPK:GLCNF), etc.) as well as many SMEs (small and medium size enterprises). They finance the upfront payment to producers by borrowing from lenders. Traditionally, big European banks dominated the $40T trade finance lending space. This setup changed dramatically over the last few years as banks started pulling out of lending to SME traders. The reasoning was two-fold:

Per WTO estimates, the trend has resulted in a ~$1.5T annual shortfall in trade finance availability. The Kratos platform directly addresses this shortfall – i.e., sub-$10M trade finance lending to SME traders. The technology stack consists of a risk management module that runs on Ethereum Blockchain. It offers security, traceability, and immutability to trade transactions, fraud protection and transparency to all parties, and bank-grade KYC/AML verification of traders. This core technology module along with the trade discovery and trade finance module form the current Kratos platform.

Since the big banks are not lending to SME traders, who is doing the lending part of the equation? Turns out that there are specialist trade finance businesses as well as alternative finance companies seeking higher yield that are more than willing to lend to SME traders, if the associated risk mitigation measures are handled for them. Kratos does exactly that and so these lenders are eager to join the platform.

Kratos obviously solves a critical need. But how did it solve the classic chicken-and-egg problem? Traders need lenders and lenders need traders – i.e., how exactly did they kickstart the platform? – the Kratos platform was borne out of a $2B run-rate commodity trading logistics business called Rhodium that the founders ran from 2011. The seeding of traders and lenders in the Kratos platform was done from the customer list of Rhodium.

The Kratos platform is currently hosting 60+ traders. This is an impressive number, given the platform was launched only in June 2019. There are a few factors that are key to the organic growth seen in the system:

The lender count in the platform is currently at 11 and the story there is equally impressive. Trade finance module was launched in February 2020 and they were expecting 8-10 lenders to join the platform within a year. Instead, they hit that number within a few months – the corresponding lender capacity on the platform is already up to ~$17B. To hit the FY 2021 trade finance volume projection of ~$5.7B, they only need ~$2.8B in lending capacity. Given this, they already have plenty of runway on the lending side.

The triple-digit growth projection over the near term is backed by the ~$1.5T shortfall that WTO projects for 2020 in trade finance availability. It is important to note that this figure is not the actual Total Addressable Market (TAM) figure. Due to the dynamics of the space, it is very difficult to get an accurate TAM number. So, the ~$1.5T should be looked at as a figure that has some correlation to the size of the TAM. In any case, as the number is so large, it is reasonable to assume that they won’t hit a growth ceiling based on TAM size in the foreseeable future.

The spend in the books for building the Kratos platform is indicated as ~$13M with another ~$7M spent during incubation. Given this relatively low number, it is reasonable to ask what would prevent new entrants from entering the space and taking market share? – turns out that there are significant factors that make Kratos a very defensible platform:

1. Network Effects: the Kratos platform benefits from strong network effects. Traders attract lenders, which in turn attract more traders, thus resulting in a virtuous cycle. When each trader/lender brings in their multiple counterparties into the platform, the resultant growth becomes exponential.

2. Product Expansion: Kratos is currently an Asia-centric business with a small European presence and plans to expand to Americas soon. They also have plans for commodity product expansion. But the central focus is on making the platform so powerful that both traders, lenders, and their counter parties can conduct all their business from within the platform. The strategy can result in an extremely sticky product, if they can continue to execute. To that end, they have the following initiatives:

3. Disruptive Pricing: The 130bps charged on amount financed is more economical than offline arrangement fees that on the average can exceed 250bps or more. The 30bps charged on value of goods traded is an extremely attractive value proposition for traders as the platform offers transparency and fraud protection which were lax previously. This along with the speed and efficiency improvements makes the offering compelling.

As a disruptive business, it is hard to find true comparables. Exchanges and alternative trading systems areas that include players such as CME Group (CME), Cboe Global Markets (CBOE), Intercontinental exchange (ICE), etc. have some similarities such as facilitating trading and recurring transaction-based revenue model. In general, most are much bigger players and so the growth profiles are much more modest as seen below:

Even using exchanges and alternative trading systems as a group as comparable, the projected valuation indicates a large discount as seen below:

Note: Drip Capital, a Palo Alto fintech is an up-and-coming business in the space but one main difference is that they take credit risk and does their own lending.

It seems obvious that an asset-light fee-based fintech business with strong network effects and demonstrated triple-digit growth rate trading at a PE of 12 is a no-brainer investment. But why does this opportunity exist? – there is probably some discounting since the business is domiciled in Singapore but that doesn’t explain the large gap in valuation. Currently, there is a level of indifference among retail investors for de-SPAC situations. Promising opportunities like this one seems to be getting overlooked. This is understandable as the following scenario played out over the last several months:

The negative sentiment should reverse eventually as SPACs do provide a unique opportunity to participate in the growth of early stage businesses alongside PE players. For an investment in Netfin at the current price to work out, a sentiment reversal in the SPAC space is not even necessary. The first earnings release after Triterras starts trading on Nasdaq should result in a re-rating.

Disclosure: I am/we are long PSTH, PSTHWS, NKLA. I wrote this article myself, and it expresses my own opinions. I am not receiving compensation for it (other than from Seeking Alpha). I have no business relationship with any company whose stock is mentioned in this article.