nCino Is A Great Business, But Here’s Why You Should Avoid It (NASDAQ:NCNO)

Currently, nCino (NASDAQ:NCNO) is a SaaS company that uses the cloud to offer its services. Its clients are financial institutions in the US, and it’s also starting to expand internationally. Overall, the stock is unique as it offers investors exposure to the cloud sector with a financial twist. Plus, NCNO’s revenue growth makes it an exciting potential investment for growth investors and momentum traders. However, from a valuation perspective, I think the stock’s valuation is entirely unjustifiable. For context, NCNO isn’t even FCF positive, and its P/S ratio of 40 is sky-high. For context, we’re talking about a company with a market capitalization of $7.59 billion that currently has less than $200 million in sales with negative margins. Therefore, given the circumstances, I believe investors should pass up on NCNO at these levels. 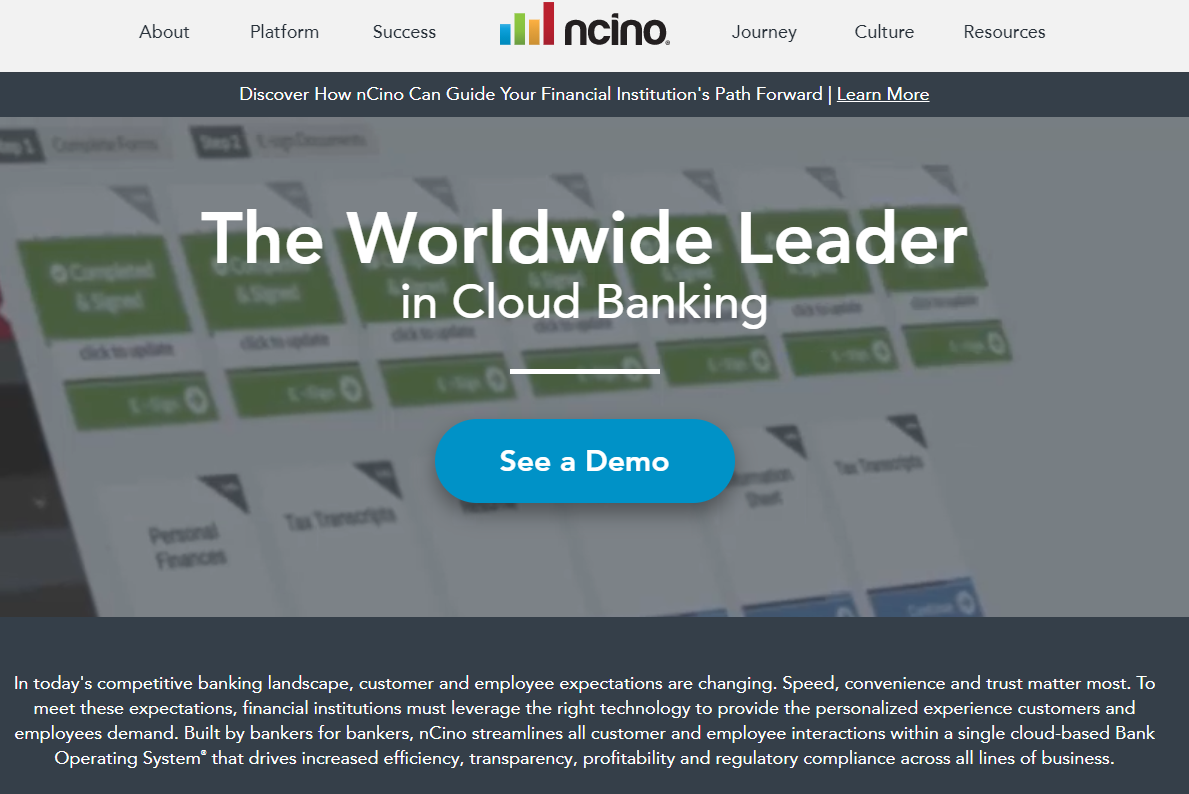 In my opinion, nCino is an exciting company because it’s the quintessential growth stock. Its service is virtually a bank operating system that revolutionizes how such financial institutions conduct their day-to-day operations. For instance, nCino’s software appears to be fantastic at reducing onboarding times for new banking customers. Also, loan origination processes seem to be much more efficient with nCino’s software. 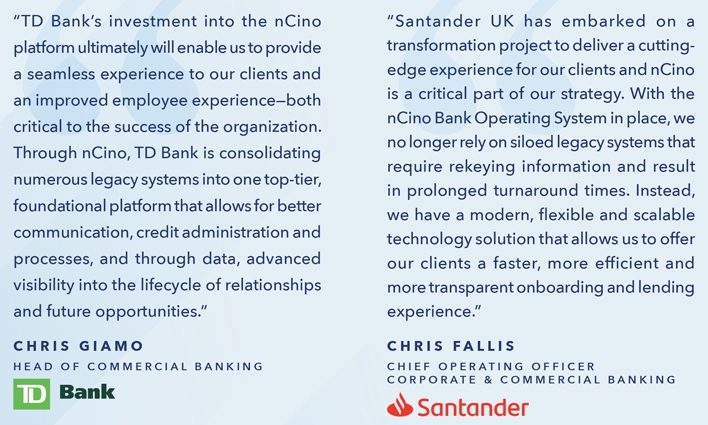 Generally speaking, it appears that most of the company’s customers are relatively excited about the opportunities and efficiencies that nCino’s solutions create for them. Hence, it’s undoubtedly a value-creating service. And more importantly, the company’s total addressable market is estimated to be approximately $10 billion, according to nCino, which means there’s an ample runway for future top-line growth.

As you might expect, this type of service seems ideal as a cloud solution. And indeed, NCNO is built as such. In a way, you could consider it a niche version of Salesforce’s (NYSE:CRM) platform. Salesforce Ventures (the investment arm of CRM) invested in the early days of NCNO as it saw its potential for banking clients. Today, several of nCino’s functionalities are built on top of the Salesforce Platform and rely on a commercial agreement with Salesforce itself. Such a business agreement includes hosting infrastructure and data center operations, which are the bread and butter of this sector. Unmistakably, the relationship between nCino and Salesforce runs deep.

READ ALSO  US Industrial Production Jumps Most Since July

Moreover, NCNO’s primary functionalities, like client onboarding, loan origination, and deposit account opening, are entirely dependent on the Salesforce platform. Thus, NCNO has virtually hitched its future to CRM. And to offer you some context, the ongoing contract with CRM expires in 2027, so it won’t be a massive issue in the near term for investors. However, from an investment perspective, the key takeaway is that NCNO has, for better or worse, tied its fate to CRM. 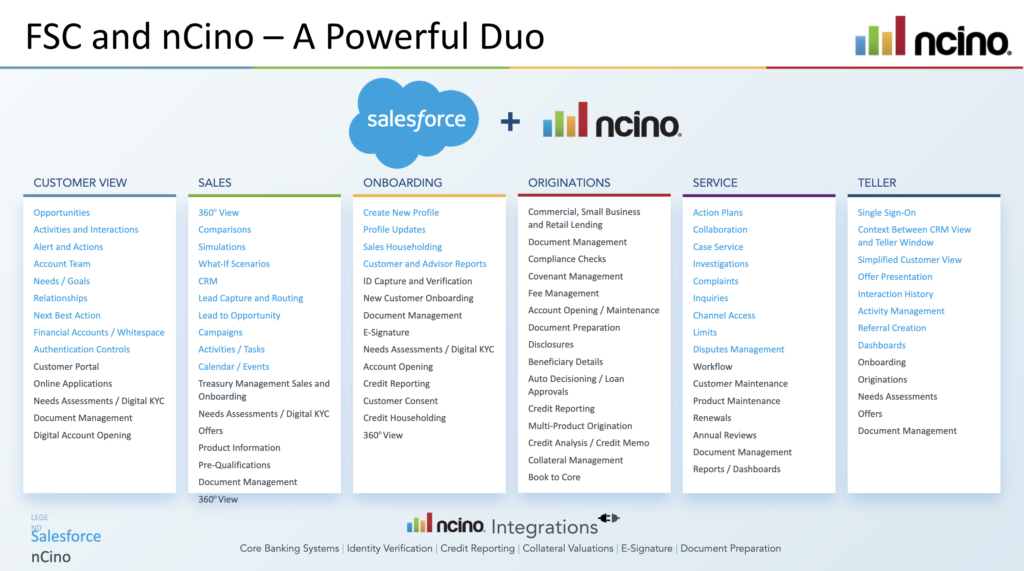 This has pros and cons, which are worth noting. In particular, NCNO’s value proposition is dependent on CRM. Currently, this looks like a winning formula. But the sector is incredibly competitive and dynamic. So the business landscape could still change significantly in the medium term, and if for whatever reason CRM falls out of favor with clients, then NCNO could become collateral damage as well. However, on the flip side, NCNO seems to be able to ride CRM’s coattails successfully. So if CRM continues to thrive, then NCNO’s future should also be bright. And I don’t see anything that could change that dynamic for the foreseeable future.

Still, the reality is that the company’s stock price seems to be already reflecting most of these positives in its valuation. For context, the company is expected to have roughly $238.66 million in sales by 2022. However, its current market cap is already approximately $7.56 billion! This means that even by 2022’s expected revenues, the company is still trading at a whopping P/S ratio of 31.68! Thus, I’d argue that the market is pricing in explosive growth for nCino in the near term.

And unfortunately, that limits the upside for new investors at this point. In fact, since the stock’s valuation appears to be priced for perfection, there could very well be a sharp correction if there are any hiccups along the way. Any unexpected negatives could easily send the shares significantly lower, and I consider that such occurrences are very likely over the long term. Anything from missing lofty revenue expectations to seeing worsening margins due to increased competition could send the shares tumbling down. Hence, in my view, the stock’s risk-reward proposition at these levels looks remarkably skewed against new investors.

Usually, I’d attempt to value NCNO through its FCF. However, NCNO doesn’t even have a positive FCF. As it stands, the company is burning roughly $14.8 million per year and hasn’t been FCF positive since 2018. I’ll concede that it’s entirely reasonable for a growth stock (like NCNO) to be burning cash in its initial stages as it grows. And if that’s the case, it’s probably better to try to model NCNO through the price-to-sales multiple instead.

Consequently, I used the CAPM to derive a fair multiple for NCNO. Such multiple could be used for its eventual earnings or, more importantly, its future FCF (which I assume will someday turn positive). In this case, my fair multiple estimates are 24.9. This figure is reasonable for a growth stock, in my experience. It’s then a matter of estimating what nCino’s FCF would look like if the bullish case materializes. For this, I used Salesforce’s FCF margin and solved for NCNO’s required revenue to justify its current valuation. 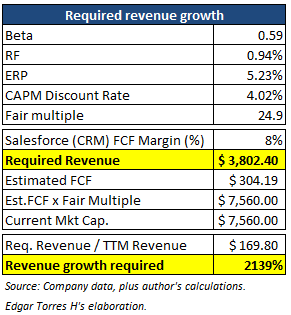 As you can see, my model suggests that NCNO’s current valuation would be justified if its revenues increase by 2139%. In my view, this is just an untenable figure in the near or medium term for NCNO. This is why it’s logical to conclude that the stock is undoubtedly overvalued. Naturally, this valuation approach may be blunt, but I believe it can point us in the right direction. And since the valuation disconnect is so wide that I feel my conclusions are well supported.

In my opinion, NCNO would make much more sense if it were pricing in only $500 billion in revenues over the next few years. If this were the case, NCNO would require a more “reasonable” revenue growth rate of just 194%. And while such a growth rate would still be very optimistic, it’d also be much more defensible given NCNO’s underlying business prospects. This would suggest roughly a $1 billion valuation for NCNO at the most. However, as it stands, the current valuation multiple is entirely unjustifiable, as far as I can tell.

I’ll concede that NCNO’s underlying business is extremely promising, and indeed it’ll feasibly continue to be successful in the long term. However, as investors, I think it’s risky to ignore the fundamentals and chase a sky-high valuation to the moon. From my perspective, this line of reasoning can quickly trap investors in overvalued stocks for many years while waiting to break even. Consequently, I recommend investors to pass up on nCino for now and wait until the numbers make more sense before initiating a position. But bear in mind that even a 50% correction would still be expensive according to my model, so I’d argue to avoid the stock altogether and add it to a watchlist. After all, maybe in a year or two after further revenue growth and a deep pullback, NCNO’s valuation might make more sense.

Thank you for reading, and good luck.