National Basketball Association playoff games will resume on Saturday after players ended a work stoppage in return for a commitment from the league to social justice measures including the conversion of stadiums into polling places in the 2020 presidential election.

The agreement ends a protest that began on Wednesday when the Milwaukee Bucks refused to take part in a playoff match in response to the shooting of Jacob Blake Jr, a 29-year-old African-American man, by a white police officer in Kenosha, Wisconsin, 40 miles from the team’s base.

The protest had put completion of the NBA season under threat after play had resumed in a socially distanced “bubble” during the coronavirus pandemic. The matches at ESPN Wide World of Sports, part of Florida’s Disney World resort, are critical to the NBA’s revenues, which came to roughly $8bn last year.

In a statement, Michele Roberts, executive director of the National Basketball Players Association, and Adam Silver, NBA commissioner, said that talks involving players, coaches and team officials had been “candid, impassioned and productive”.

Under the agreement, the league and its players will set up a social justice coalition to encourage greater participation by voters and advocate for “meaningful” reform of the police and justice system. 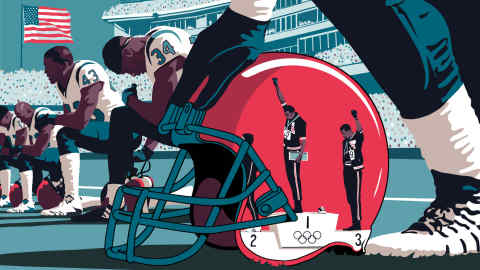 In cities where teams own their arenas, the clubs and election officials will collaborate to enable people to vote in the 2020 general election. The league and the players union said the move would allow for “safe in-person voting” for communities at risk of Covid-19.

Each playoff game will include advertising to promote “greater civic engagement” in elections.

“These commitments follow months of close collaboration around designing a safe and healthy environment to restart the NBA season, providing a platform to promote social justice, as well as creating an NBA Foundation focused on economic empowerment in the black community,” said Ms Roberts and Mr Silver.