Navios Maritime Partners (NYSE:NMM) continues to underperform, trading at a tiny fraction of NAV. The unit price is still down almost 60% on a YTD basis versus declines for the S&P 500 and Dow of ~3.6% and ~8.5%, respectively.

NMM is even at the bottom of the pack compared to its dry bulk peers, as evidenced by the graph below.

To be fair, NMM still pays a dividend while most peers don’t (ultimately what matters is total return). The current dividend distribution yield is in excess of 15%; however, the distribution is well covered on a normalized basis. The quarterly distribution of $0.30 per unit “costs” $3.4M versus adjusted EBITDA of $19.1M for Q1 2020.

What brings tremendous stability to NMM’s cash flow is the five containerships chartered out to HMM on lucrative long-term fixed contracts (expiring December 2023). Note, charter rates surged in December 2019, increasing from $24,095 per day to $30,119 per day:

This is the key differentiating factor compared to its pure-play dry bulk peers. To put things into perspective, these lucrative contracts allow NMM to be cash flow positive in virtually any dry bulk rate environment. Not only that, but also the additional daily increase of ~$6,000 per vessel equates to a total ~$30,000 per day cash flow boost, which equates to ~$11M in annualized cash flow. This is almost the entire amount NMM pays in annual distributions (currently $13.6M per year).

Many positive things have happened recently. We have clarity on the liquidation of Navios Europe II. As per the latest 6-K filing:

On April 21, 2020, Navios Europe II agreed with the lender to fully release the liabilities under the junior participating loan facility for $5.0 million. Navios Europe II owns seven container vessels and seven dry bulk vessels. Navios Partners had a net receivable of approximately $17.3 million from Navios Europe II. Navios Partners expects to receive approximately $4.0 million cash, two Ultra-Handymax and three Panamax dry bulk vessels. In May 2020, the Conflicts Committee approved the allocation of assets to Navios Partners, subject to completing vessels’ financing and working capital adjustments. The closing of the transaction is expected during the second quarter of 2020. No assurances can be provided that definitive agreement will be executed or that the financing will be consummated in whole or in part.

In short, NMM will receive ~$17.3M in equity value, namely ~$4M in cash and five dry bulk vessels (two Ultra-Handymaxes and three Panamaxes). While ~$17.3M may not seem like a big number, it is around 20% of NMM’s current market cap of ~$85M. I expect the market to catch up to this.

I also expect the market to catch up to the following positive news, sooner rather than later. On Wednesday 17 June, the BDI (the Baltic Exchange’s main sea freight index) recorded its biggest ever daily percentage jump, fueled by surging capesize rates (as a result of a spike in iron-ore shipments). This was picked up by leading shipping analysts like Joakim Hannisdahl, head of research at Cleaves Securities: 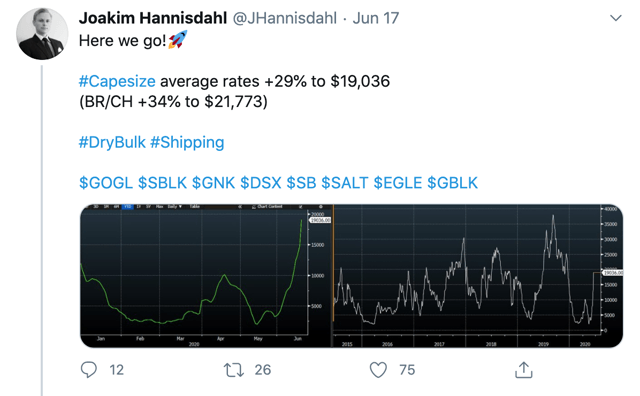 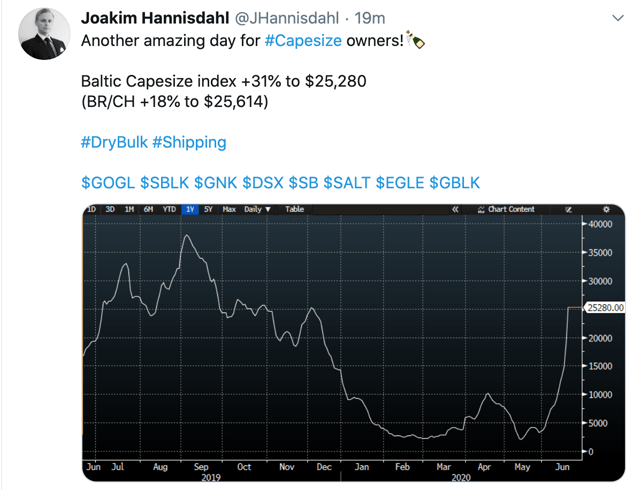 NMM has a sizeable capesize portfolio of 14 vessels.

All of the aforementioned positives (Navios Europe II liquidation, dry bulk market improving, containerships chartered out to HMM producing additional cash flow) will eventually result in a much higher unit price. In my view, it’s a matter of time, but when it happens it will happen really fast.

It is important to highlight that based on pre-reverse split figures (one-for-fifteen reverse split), NMM is trading at just ~$0.5 per unit. For those who followed NMM on a pre-reverse split figures, anything under $2 (equivalent to $30 post-split) was considered quite cheap. We have a long way to go until those levels ($30+), but they are realistic. For example, a unit price of $30 (almost 4 times increase) equates to a market cap of ~$330M, which is arguably still below NAV (charter-free fleet value plus contracted cash flow).

I have been following NMM for more than a decade. In my view, this is perhaps one of the most interesting and promising moments in the company’s history, which has suffered ever since eliminating the legacy distribution in 2015/16. Since then, the company has been trying to delever as well as grow the fleet with a low distribution payout model. NMM is currently well positioned to generate strong free cash flow as the dry bulk and containership markets pick up. Following the Navios Europe II liquidation, NMM will operate 53 vessels. If the dry bulk market plummets again, the five containerships chartered out to HMM provide much-needed stability, ensuring that NMM remains cash flow positive in virtually any dry bulk rate environment. NMM has a diversified debt maturity schedule, with no material debt maturities until Q3 2021 and no significant committed growth capex. We finally have clarity on both Navios Europe I and Navios Europe II. Let’s hope NMM can find a way to take advantage of its stake in Navios Maritime Containers (NASDAQ:NMCI) as well.

In closing, NMM has a large fleet of 53 vessels (highest number in its history). Debt is close to the lowest point in its history (37.4% net debt to book capitalization). Yet, the unit price is hovering at much lower levels compared to the shipping crash of 2015/16 (back then, things were arguably much worse for NMM). The market will eventually come to its senses, as the discount to NAV is unprecedented, especially with all the additional equity value realized from Navios Europe I and Navios Europe II. Yet, the market cap is still just ~$85M. It is also important to note that the company’s general partner (GP) interests were sold by Navios Maritime Holdings (NYSE:NM), the previous parent, to N Shipmanagement Acquisition Corp., an entity controlled by NMM’s CEO. This is a net positive, as the market perceived the relationship with struggling NM as toxic. NM is now just a large unitholder, owning 18.5% limited partner interests in NMM. Despite this, the massive discount to NAV persists.

Disclosure: I am/we are long NMM. I wrote this article myself, and it expresses my own opinions. I am not receiving compensation for it (other than from Seeking Alpha). I have no business relationship with any company whose stock is mentioned in this article.