Navios Maritime Partners (NMM) have direct ownership in 55 vessels. In addition, they also hold a 37.5% interest in the containership owning company Navios Maritime Containers (NMCI) as a result of spinning this off last year.

The condition in which NMM operates is generating excess cash. The question is what will the management do with it? From history so far, fleet renewal and balance sheet improvements have been prioritized over distribution to common equity holders.

Many companies have fortunately been able to produce results in the 3rd quarter which exceeded most people’s expectations. There was obviously quite a lot of fear about how bad the pandemic would be on the economy and how that would result in lower earnings.

How did NMM fare during the last quarter?

The net operating surplus for the quarter was $16 million, a huge improvement from the loss of $1.1 million we saw in the 2nd quarter.

I also like to look at how much of their fleet are covered with employment going forward. This is important because of the big volatility in earnings from the spot market. NMM has contracted 98.7% of the available days for 2020 and more importantly 45.5% for 2021, including days contracted at index-linked charters. This is slightly higher than the 41.5% contract coverage which they had at the end of the previous quarter.

In order to look at how much improvements there have been since the beginning of this year, we should look at their average time charter earnings and the Baltic Dry Index, which many of their ships are indexed to. 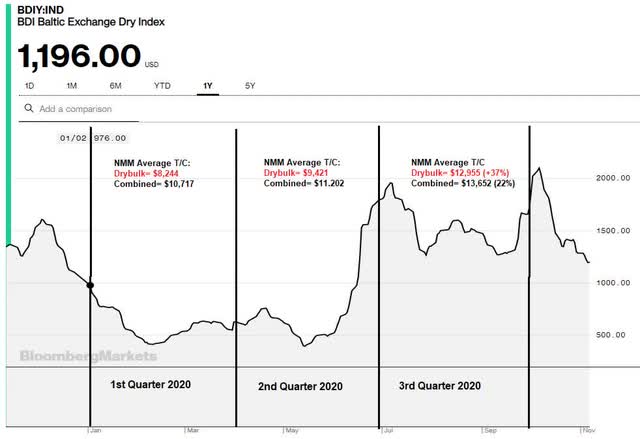 As long as the Baltic Dry Index stays above 1,000, NMM will be generating positive cash flow.

One area which has made a huge difference to their profitability is the reduction in the cost of servicing their long-term debt of $505.7 million.

As a result of refinancing the term loan B last year as well as the decrease in LIBOR rates, NMM has been able to report a reduction of interest expense in finance cost for the first 9 months of 2020 by about $16.6 million compared to that of the corresponding period in 2019.

What to do with the surplus?

When a company does make money, there are often different views on what to do with it.

It is basically up to the various Captains of these companies to decide what to do. Some, like John Fredriksen, controlling owner of Frontline (FRO), Golden Ocean Group, SFL Corporation (SFL), and Seadrill (OTCQX:SDRLF) have had a philosophy of distributing most of the surplus back to all the shareholders. At times, they paid back more than what could be considered to be safe.

When NMM went public back in 2007, they started out with a high dividend payout ratio. In my article from 2018 titled “ Show Me The Money,” you can see the generous distribution.

We have gone through some very tough years where survival was more important than paying out dividends.

Let us decide that the past is the past. What matters most is the future.

A way to determine how much cash can safely be distributed, even NMM has been kind enough to guide us on how we can determine this. It is the Operating Surplus. On page 4 of the results announcement, it says;

In the last quarter, NMM had an operating surplus of $16 million. Of this, they are going to return $600,000 to unitholders. 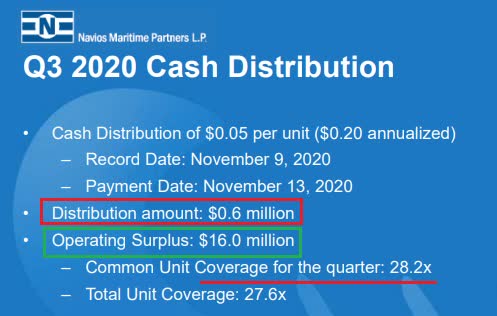 So, it is not a question of ability to distribute, but a willingness to do so.

They do need to regularly renew the fleet. I do not have a problem with that.

Out went the “Esperanza N,” a 2008-built Containership of 2,007 TEU, and the Ultra–Handymax Bulk carrier vessel called “Navios Soleil,” which was built in 2009. The net proceeds for these vessels will be $4.6 million and $8.2 million, respectively. Delivery to new owners will take place in January next year.

However, I think they should try to find a balance between how much surplus shall be re-invested into new ships and how big a percentage should be returned to shareholders.

One could argue that it is a better allocation of capital to buy back shares at the present high discount of about 50%, rather than paying full price in the market to buy new ships. However, I think renewal of the fleet is equally important. They could, in fact, do both.

I would prefer if management gave guidance on how many percent of the operating surplus they intend to pay out going forward.

By doing so, they would surely gain some more trust in the investment community. If you have followed this company for a while and you took the time to read the comments to all the articles, you will have noticed that there are very few people praising managements for doing the right things in terms of rewarding shareholders.

In the past, I had been bullish on NMM for quite some time. This was based on what I saw as an improved supply and demand conditions within the space they operate.

During my last article “ Fool Me Once” I changed my rating to Neutral. I retain this rating, and for sake of clarification, I still think that the market, in which NMM operates should produce a good amount of excess cash after operating and finance costs are taken into account.

The problem is whether minority shareholders get any of that money, either through share buyback or preferably through cash distribution.

Should management decide to change course and give a meaningful return of capital to shareholders, I may change the rating.

By the way, five more cents per quarter is not a meaningful increase. After all, last quarter’s operating surplus was $1.33 and another five cents would only bring it up to ten cents. Let us not forget that the distribution was cut from $0.30 prior to the pandemic to just $0.05

This is a milestone for me as this is my 100th article here on Seeking Alpha. I mostly write about companies I invest in. It covers different segments and countries.

Disclosure: I am/we are long NMM. I wrote this article myself, and it expresses my own opinions. I am not receiving compensation for it (other than from Seeking Alpha). I have no business relationship with any company whose stock is mentioned in this article.