Welcome to the shut-in is more important edition of Natural Gas Daily!

Forget the weather for a moment here, although it’s very bullish. Production shut-in in the shale oil basins will be so large as to overwhelm demand destruction, LNG export concerns, and weather factors.

Now for those of you saying, “Wow, what does that mean for NG?” Well, Bakken produced ~3 Bcf/d, so a shut-in of half its volume would be ~1.5 Bcf/d right off the top.

Just from these 3 US shale oil basins, we will have seen a loss of 5.5 Bcf/d off the top.

So with this much supply destruction, you can pretty much throw out demand concerns, LNG export issues, and weather. If you throw everything together, we could see nearly ~8 Bcf/d of production loss in associated gas production if the same ~30% is applied across the US.

One other thing people continuously get confused on is that if a shale oil producer has high levels of debt, it can’t produce at negative cash margins on each well.

Similarly, if a grocery store operates at negative gross margins (revenue – COGS), it doesn’t matter what the rent is or any other variable, it shuts the store down.

This is the same across oil production, and similarly now, associated gas production. As oil prices remain low, producers will shut-in, and this will result in a loss of natural gas production.

Natural gas prices, as a result, will be the biggest beneficiary to all of this. And we are already seeing a sizable drop in production now. It is only a matter of time. 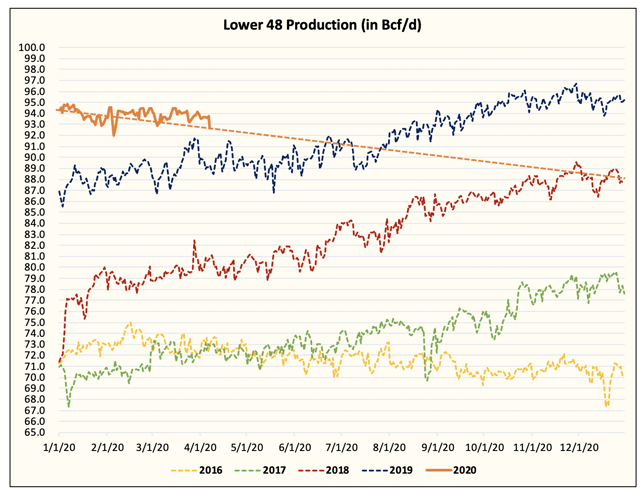 Disclosure: I am/we are long UGAZ. I wrote this article myself, and it expresses my own opinions. I am not receiving compensation for it (other than from Seeking Alpha). I have no business relationship with any company whose stock is mentioned in this article.