I have been keeping an eye on National Bank of Canada (OTCPK:NTIOF) this year as I was curious how Canadian banks were dealing with the fallout of the COVID-19 pandemic. Not only did most banks have to deal with loan deferrals (both in the commercial and residential segment), most Canadian banks were also impacted by the low oil price as lending to energy-related businesses tends to be a core pillar for most banks. After a weak Q2, most Canadian banks reported satisfying results in the third quarter, and National Bank has been able to reduce its loan loss provisions on a quarterly basis.

The Q4 results were decent, but not fantastic

Despite lower loan loss provisions, the Q4 net income was a bit lower than I had expected as for instance the trading revenues came in about C$150M lower than in the same quarter last year. Additionally, staff expenses increased by about 10% while National Bank also spent almost twice as much on technology in the final quarter of the year. These are actually the only two elements that caused National Bank’s pre-tax income to decrease as I’m positively surprised by pretty much every other element of the income statement. 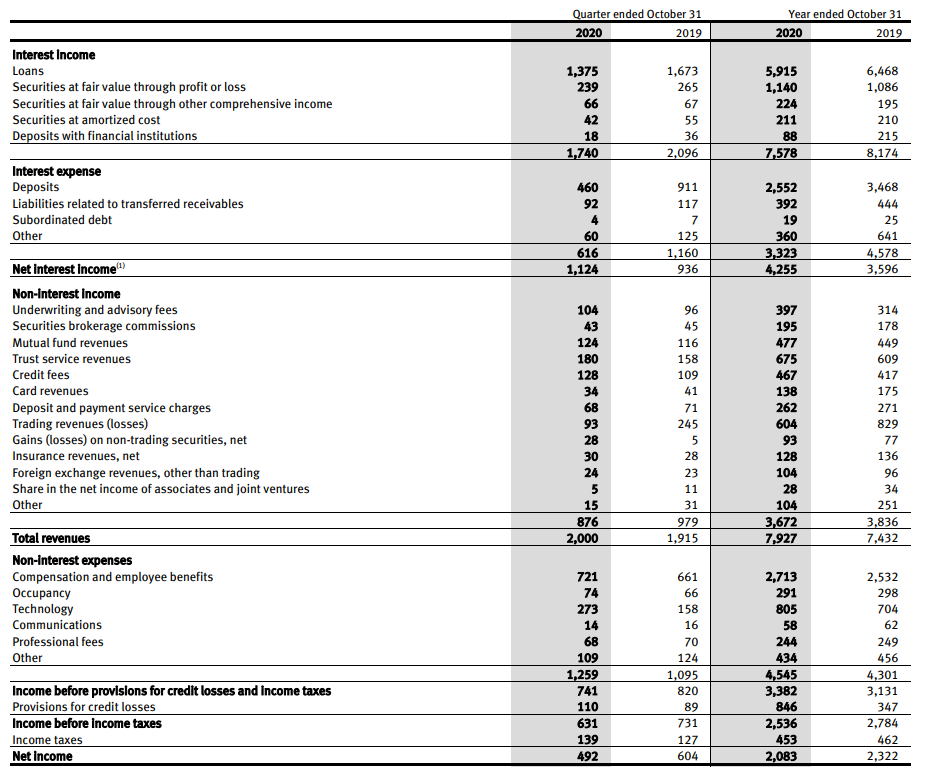 As you can see above, the pre-provision income came in at C$741M versus the C$820M in Q4 FY 2019 and that’s interesting. It means that even if we would accept the higher staff and technology expenses as ‘the new normal’, the pre-provision income would have come in approximately 10% higher than Q4 last year if National Bank would have been able to report the same trading income in the last quarter of this year. So while the reported result came in a bit lower than my expectations, it’s important to understand why this happened and it looks like there may have been some non-recurring events involved.

You’ll notice the loan loss provisions came in at just C$110M. Substantially lower than in the previous few quarters and only marginally higher than the C$89M reported in Q4 2019. And these lower loan loss provisions – which appear to be stabilizing at just a little bit higher than last year’s quarterly provisions – are very encouraging. I was initially unsure whether National Bank was too optimistic when it assessed the performance of its loans, but I think we can now trust the bank to have a pretty good grip on its loan book and expected fallout. 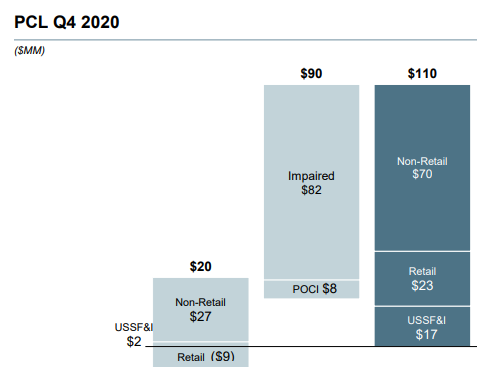 The bottom line shows a net income of C$492M of which C$2M is attributable to non-controlling interests and an additional C$31M had to be paid out to preferred shareholders. This resulted in a net income of C$459M attributable to the National Bank shareholders, representing an EPS of C$1.37/share. This brings the full-year net income to C$5.73 per share providing a dividend coverage ratio of around 200% as the C$0.71 quarterly dividend is still more than fully covered.

The deferrals are decreasing very fast, and lower future provisions could be expected

Perhaps the lower loan loss provisions shouldn’t come as a surprise: of the C$165B loan book, almost C$65M consists of residential mortgages which should be seen as safer than loans to businesses and commercial real estate. However, Canada has been quite flexible when it came to allowing borrowers grace periods to make mortgage payments and banks have supported their customers with payment deferral programs. The vast majority of those ‘official’ grace periods has now ended, and it was important to keep an eye on what percentage of the portfolio restarted making payments, and which portion would have to be moved over to loans past due.

A similar comment can be made on the residential real estate. Sure, C$695M worth of mortgages under a deferral program perhaps isn’t the best performance but I still think the risk is very low: 43% of those mortgages are insured mortgages while the average LTV ratio of the non-insured mortgages is just 59%. So of the C$695M residential mortgage loans under a deferral program, C$300M is insured while the appraisal value of the remaining C$395M is approximately C$669M. Sure, some mortgages may go sour, but the impact on National Bank should remain very limited.

Additionally, the oil and gas sector appears to be picking up steam again and this, in combination with National Bank having reduced its exposure in the past few years also provides a good reason as to why the loan loss provisions remain relatively limited. 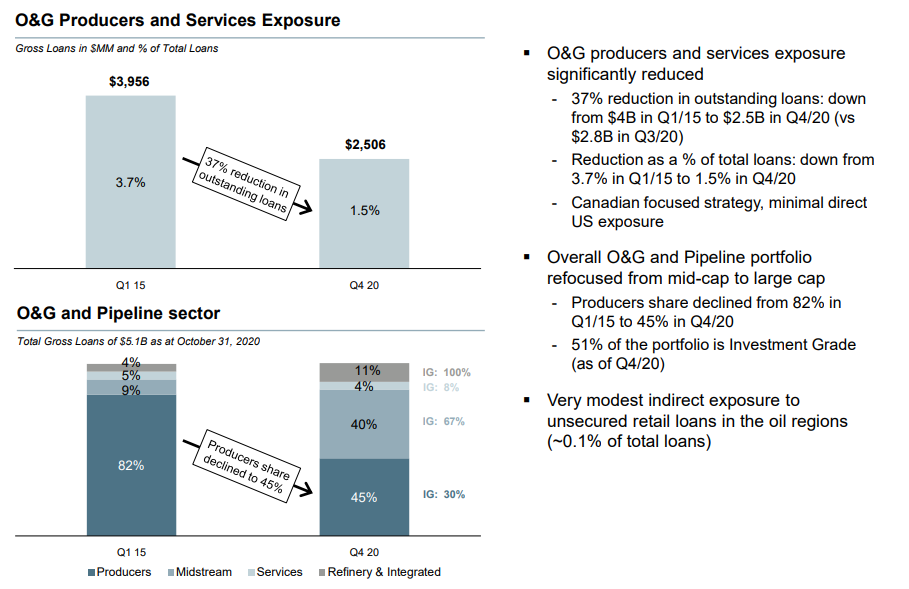 While the EPS in Q4 is perhaps a bit disappointing, I think investors should focus on the other positive elements: the loan loss provisions have been reduced to 2019 levels while only a minority of the loans is still part of a deferral program. I’m not worried about the residential mortgages under a deferral program and I’m also confident National Bank will be able to deal with the almost C$1.2B in commercial loans.

I have a long position in National Bank but am not chasing the stock here. Should the share price drop to the lower-C$60 region in the next few months I would be interested in adding to my position.

Disclosure: I am/we are long NTIOF. I wrote this article myself, and it expresses my own opinions. I am not receiving compensation for it (other than from Seeking Alpha). I have no business relationship with any company whose stock is mentioned in this article.