‘Naked in the face of this crisis’: Spain’s Latin American workers suffer

José, a 40-year-old former graphic designer from Colombia, is on the front line of Europe’s coronavirus-driven economic crisis: as an immigrant in Spain, he is one of the most vulnerable group of people in the EU’s worst-affected major economy.

In March he fell ill with Covid-19, like thousands of others in Madrid; in April he was admitted to hospital; in May he lost his job as a doorman. Now, months later, he is still looking for a job.

“Initially my boss did not believe I was infected and I had to keep working,” said José, who did not want his full name to be published. “But then my symptoms got worse and I was replaced by someone else. I was on a temporary contract, so that was it for that job.”

His is a story that is all too common.

Despite a rebound in the third quarter, Spain’s coronavirus-hit economy was 8.7 per cent smaller at the end of September than it was a year before — a bigger contraction than any other major eurozone country.

In large part it is immigrants who are suffering most from the fallout, because of their exposure to what many analysts identify as the main structural vulnerabilities of the Spanish economy: its dependence on the battered services sector, its reliance on temporary contracts and the prevalence of small companies that are struggling to withstand the crisis.

If you are a new entrant, you have to take work where you find it — and that is typically in the services sector, in a small business and on a temporary contract

For Latin Americans working in bars and restaurants, as home helps or as doormen like José, the downturn has translated into a jobs bloodbath, with bleak prospects for the months ahead.

Figures for last month show that there were more than half a million unemployed foreign workers in Spain — a 40 per cent rise on a year ago. Two-thirds are from outside the EU. No other group has experienced such a surge in joblessness, double the increase for the population as a whole. Foreigners, particularly Latin Americans, line the queues of Spain’s growing number of food banks.

“So many people have been sacked, so many people are naked in the face of this crisis: on temporary contracts, in the black economy, or without papers,” said Tatiana Retamozo, a Peruvian law graduate who worked as a house cleaner in Spain before helping set up an NGO network for Latin American women.

The number of Latin American workers in Spain reflects a transformation in Spanish society since the turn of the millennium. In 1998 less than 2 per cent of people living in Spain were foreign nationals. By contrast, at the start of this year there were more than 5m foreigners in Spain — 11 per cent of the country’s 47m population. A further 5 per cent — more than 2m people — have taken Spanish citizenship.

At least 1.4m of the foreign nationals are Latin Americans, drawn to the country by cultural, linguistic and family ties, a relatively accommodating immigration regime and the disparity between hardship at home and Spain’s procyclical economy, which typically grows faster than the European average in good times and slumps deeper in bad. Many more have taken Spanish citizenship.

“I was told that if I came here, I could live well, earn €10 an hour or €80 a day,” said Paola Verdejo, a Chilean now looking for work in Madrid after 10 years in the country. “But when you arrive you see that things aren’t so brilliant.”

Last year Spain experienced a bigger increase in immigration than any other OECD member — more than 400,0000 new arrivals, over 60,000 more than the year before. The leading countries of origin were Colombia and Venezuela.

Now new entrants and established immigrants alike are scrabbling for jobs in an economy that excludes them from many of the benefits that protect Spaniards from the brunt of the crisis.

Activists say groups such as Spain’s 600,000 home-helps — overwhelmingly women and predominantly Latin American — are particularly exposed. They are not entitled to unemployment benefit and to date fewer than 33,000 have received an emergency government subsidy to help “home employees” cope during the crisis.

“We suffer from sexual discrimination, from racial discrimination, with employers refusing to pay social security or the minimum salary,” said Carolina Elías, an El Salvadoran lawyer who worked as a home help in Spain for five years and now runs an NGO for domestic service workers. “During the lockdown many people were stuck at their employers’ homes and had to work Monday to Sunday, with no extra pay; others were simply sacked.” 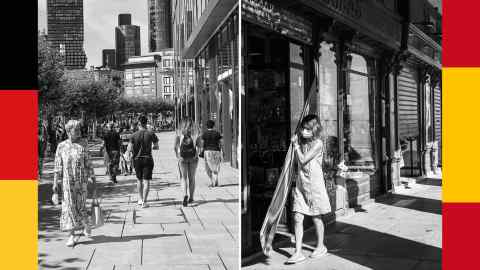 Fernando Fernández, a former IMF economist now at Madrid’s IE Business School, added that many recently arrived immigrants suffer from the same problems as Spain’s young people: “If you are a new entrant into the workforce, you have to take work where you find it — and that is typically in the services sector, in a small business and on a temporary contract.” As a result, life is often precarious.

But Mr Fernández argued that in Spain, Latin Americans have considerably greater social mobility than Moroccans, the country’s largest contingent of immigrants, who often work in the agricultural sector.

“I don’t know how long the Covid effect will continue but, in the longer term, more people [from Latin America] will come,” he said. “Emigrating to Spain will still be an escape valve from Latin America’s periodic crises and a source of entrepreneurial vitality here.”

In the meantime, however, immigrants like José are focused on getting by. Since losing his job, he has worked occasionally on a building site for €50 a day and relied on food banks and other forms of charity.

“I hope I can find work soon,” he said. “In times like this, you can’t think about the future: you take whatever work there is.”