Residents of Stepanakert, Nagorno-Karabakh’s capital, have endured an anxious week, filled with the sound of air-raid sirens warning them to take shelter and the threat of artillery fire and drone attacks.

“Everyone is hiding in bomb shelters. Women and children are there 24 hours a day,” said Alexander Bagdasaryan, who was visiting the town when Azerbaijan launched its assault on Nagorno-Karabakh last weekend. “They’re attacking as if it’s a full-on war. I saw them shoot down five drones with my own eyes,” he added.

The fierce clashes this week in the disputed Caucasus Mountains enclave, situated within Azerbaijan’s borders but populated by ethnic Armenians, are the worst since the adversaries fought a bloody war over the territory after the Soviet Union’s collapse.

At least 169 people have died in the latest chapter of one of the world’s more intractable conflicts, given a new dimension this time by the muscular support that Turkey has given to Azerbaijan.

“The cultural and symbolic meaning of [Nagorno-Karabakh] for both peoples cannot be overstated,” Thomas de Waal writes in Black Garden: Armenia and Azerbaijan Through Peace and War, his history of the conflict. “For Armenians, Karabakh is the last outpost of their Christian civilisation. Azerbaijanis talk of it as a cradle, nursery, or conservatoire, the birthplace of their musicians and poets.”

Everyone knows that Armenians have always lived here . . . Everyone will fight until the last drop of blood

It was in the late 1980s that Armenians in Nagorno-Karabakh, then part of Soviet Azerbaijan, rebelled against what they saw as “forced Azerification” and demanded that the territory become part of Soviet Armenia.

War broke out between Armenia and Azerbaijan as the Soviet Union collapsed and although a ceasefire was struck in 1994, it failed to bring a lasting settlement. The conflict has erupted several times since, most notably when more than 100 people died in a four-day skirmish in 2016.

Today, the self-proclaimed republic of fewer than 150,000 people remains unrecognised worldwide and essentially propped up by Armenia, which has floated the idea of fully annexing it.

Armenia and its sizeable diaspora have poured significant resources into rebuilding Stepanakert, a town of about 55,000 people, which boasts new roads, well-stocked shops and, in the surrounding hills, a burgeoning wine industry.

But scars from the wars remain. A number of towns populated by thousands of ethnic Azeris during the Soviet era, such as Aghdam, now lie empty.

As Azerbaijan has this week continued its aerial and missile assault, it claims to have captured several strategic heights and to have taken out a number of Armenian defensive fortifications.

Despite the use of Turkish-made drones and sophisticated weaponry, much of the fighting is akin with conflicts fought a century ago.

This is “very much first world war-style trench warfare and well-entrenched fortified positions where it’s very difficult to gain any kind of military breakthrough,” said Richard Giragosian, director of the Regional Studies Center, a Yerevan think-tank.

Carey Cavanaugh, a former US ambassador who helped broker landmark talks between Azerbaijan and Armenia in 2001, said: “What exists in Nagorno-Karabakh today are trenches . . . that look exactly like those dug in Belgium in the first world war.”

He characterised the fighting as “a situation where you may lose a lot of people to move a front line a very small distance, and not even be sure you can hold it in the long term”.

On Friday, Armenia’s foreign ministry said it was prepared for ceasefire talks but Azerbaijan has refused to halt what it called a “counter-offensive” until it regains complete control over the territory.

Hikmet Hadjiyev, senior aide to Azeri president Ilham Aliyev, on Friday said Azerbaijan wanted to redress grievances dating back to the 1994 ceasefire. “Complete resolution of this conflict is the ending of occupation and the withdrawal of Armenian troops,” he said.

Mr Aliyev is under domestic pressure to retake territory after tens of thousands of pro-war protesters stormed parliament in July, prompting him to sack his longtime foreign minister. 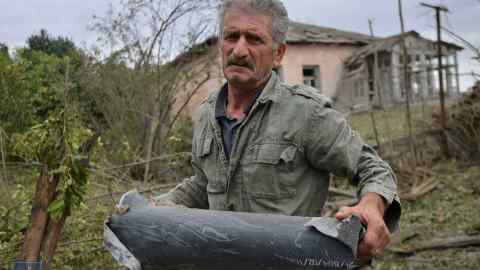 He has been boosted by unprecedented backing from Turkey, which denies Armenian claims it has sent foreign mercenaries and its own air support to help Azeri forces but has rejected western and Russian calls for a ceasefire.

Russia, which has a defence pact with Armenia but which is also a longstanding ally of Azerbaijan, has found itself struggling to influence events in a region it has long dominated.

Turkey and Azerbaijan’s bellicose rhetoric, however, masks the difficulty in quickly advancing through such difficult terrain.

Zaur Shiriyev, an analyst for the International Crisis Group think-tank, said the attritional nature of the war would damp public appetite to continue fighting.

After the last major escalation in 2016 killed more than 100 people, “public opinion was behind the government in the first days of the fighting, but when they saw the Azeris only retook a small piece of land, people started questioning whether the battle might be lost,” he said.

“Are the soldiers being killed just for the sake of taking a few hills?”

“Everyone knows that Armenians have always lived here. And nobody is going to leave because people have buried their fathers, grandfathers, mothers, wives, and children here,” he said. “Everyone will fight until the last drop of blood.”