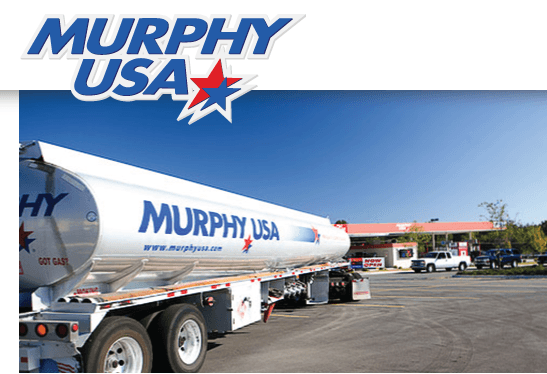 Murphy USA Inc. (NYSE:MUSA) markets refined petroleum products through a network of retail gasoline stations and to unbranded wholesale customers. Murphy’s owned retail stations are almost all located in close proximity to Walmart stores in 25 states and use the brand name Murphy USA®. MUSA also markets gasoline and other products at standalone stations under the Murphy Express brand. On September 30, 2020, Murphy USA had a total of 1,488 Company stations of which 1,151 were Murphy USA and 337 were Murphy Express. 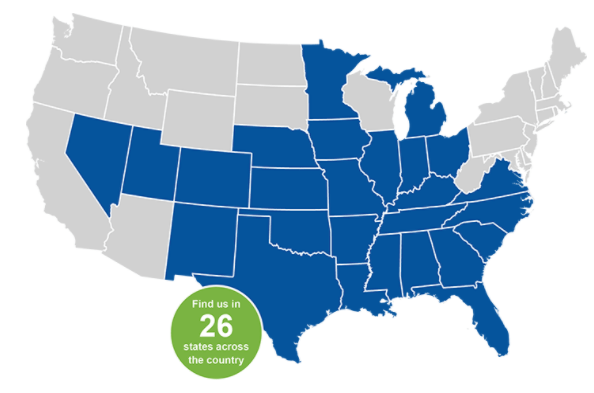 MUSA’s sales are primarily retail gasoline. In addition, it sells merchandise in its stores located by the pumps. Its largest sales item is tobacco, and it also sells lottery tickets, beer and other cold and hot food and beverages. As shown below, its petroleum product sales in the 3Q20 were $2.056 billion, down from $2.966 billion in the 3Q19 due to lower oil prices and lower gasoline consumption. Merchandise sales were $639 million in 3Q20, compared to $570 million in 3Q19. In the third quarter of 2020, MUSA’s Net Income was $66.9 million, off only modestly from 3Q19 of $69.2 million. 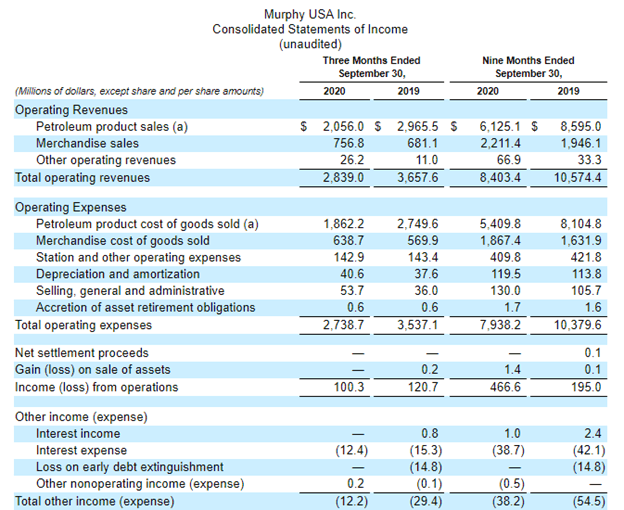 MUSA’s operations are significantly impacted by the gross margins they receive on their fuel sales. These gross margins are commodity-based, change daily and are volatile.

The COVID-19 pandemic impacted gasoline demand and gasoline sales as the work-from-home and virtual school environment affected many areas. Demand trends have improved but remain weak compared to prior years. 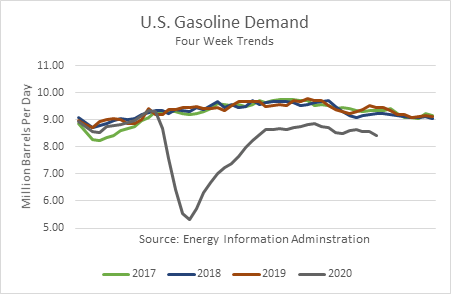 However, the oil price collapse enabled MUSA to realize strong margins in the first half of 2020. 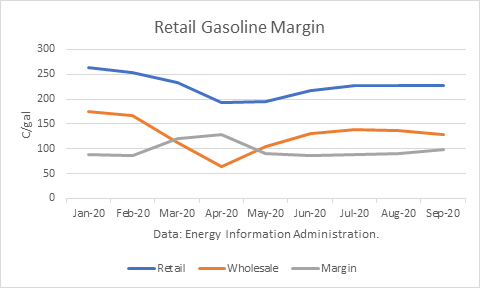 Wholesale costs fell faster than retail prices. For example, total petroleum revenues in 1H20 were $4.069 billion, costs were $3.548 billion, providing a gross margin of $522 million and Net Income of $258 million. 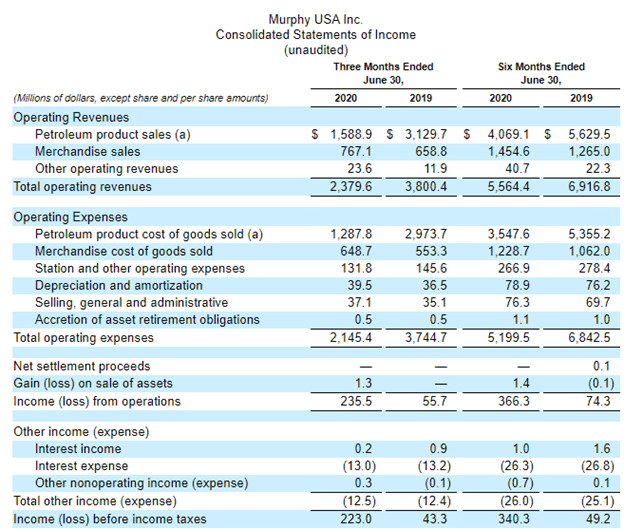 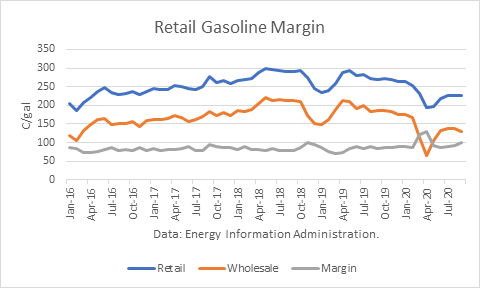 For example, for the first quarter of 2019, oil prices spiked, which depressed the profit margin. Product sales were $2.5 billion, costs were $2.382, the gross margin was $118 million, and the Net Income was $5 million.

On the Q3 2020 Earnings Call, President & Chief Executive Officer Andrew Clyde outlined the company’s ongoing evolution of its capital allocation strategy. In summary, it is allocating about $250 million a year of capital expenditures to support the development of roughly 50 new stores per year.

Our commitment to value creation through organic growth remains our highest priority and assure you capital will continue to flow to our highest returning opportunities.”

we have nearly completed the most recent authorization of up to $400 million and the Board has approved an even larger up to $500 million repurchase authorization to be completed by December 31, 2023, providing us a little over three years, which is consistent with the pace of which we have executed prior programs.”

To supplement those periods and provide consistent returns of capital to long-term shareholders, we are excited to make another commitment to long-term value creation in establishing a modest yet meaningful quarterly dividend of $0.25 per share.” 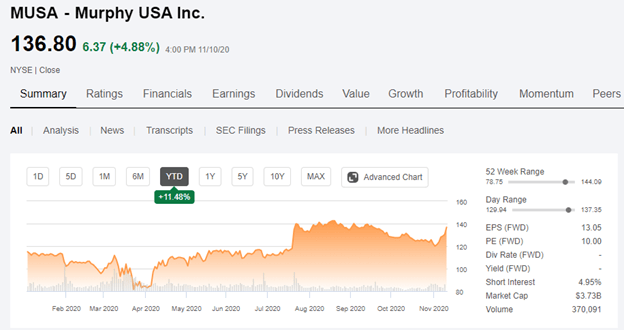 But in the past 5 years, its price has appreciated by 129%, as compared to 71% by the S&P 500. Much of the outperformance has come over the past year, as it proved its business model could continue to thrive through the pandemic, helped by the collapse in oil prices. The risk is that if oil prices spike on the back of a vaccine, its margins could get squeezed. 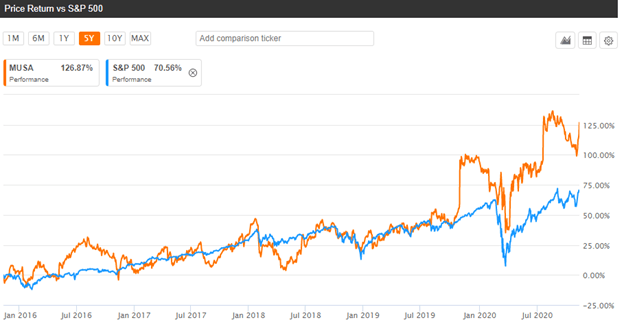 MUSA appears focused on growing its number of stores each year and finding ways to optimize the profitability of each store. That growth story is also supported by a share repurchase program and soon a dividend. I expect it will continue to outperform the S&P 500 in the years ahead.

To guide investors who are interested in profiting from outstanding opportunities in the energy sector, I provide a service on Seeking Alpha’s Marketplace oriented toward individual investors, Boslego Risk Services. A long/short Model portfolio is continuously updated, along with on-going analysis of the oil market.

I am now accepting new members to Boslego Risk Services and invite you to sign-up. There are monthly and annual pricing options as described here. You may also read reviews posted by members here.

READ ALSO  Facebook cryptocurrency Libra to launch as early as January but scaled back: FT