MSM Can Stay Muted In The Short-Term

In a pandemic-hit world, the economic indicators are mostly bearish in 2020. So, MSC Industrial Direct Co.’s (MSM) average daily sales declined sharply in the manufacturing customers, which have also put its gross margin under pressure. However, I expect increased orders for safety and janitorial products, particularly from the government sector, due to the increasing focus on hygiene. MSM has relatively low leverage and sufficient liquidity. Having a robust balance sheet and a healthy cash flow can improve the company’s relative valuation if the energy crisis prolongs. The current headwinds will not allow the stock to produce positive returns in the short-term. I would suggest waiting for the economic activities to signal a comeback before considering investing in the stock.

Let us discuss some of the strategic priorities in 2020 and the effects of COVID-19 on them. Before the virus hit the market, MSM was looking to increase its sales headcount in business development or other growth areas. It started focusing on the supplier program to improve profitability. The company was also aiming to realign its operating model to reduce expenses and improve productivity. As a result of these exercises, the company was expecting to lower OpEx to sales ratio by a couple of percentage points in 2020. The management was expecting to realize $10 million in profit in 2H 2020 and another $10 million in 2021. However, it now sounds doubtful regarding rebate payouts and other such measures following the gap in demand after the pandemic.

In the current environment, where demand is slipping aggressively, the weakness is amplified in sectors like oil and gas, automotive, heavy truck, and agriculture. Even before the travel industry was virtually shut down, the Boeing 737 Max accidents led to a demand decline in the aerospace industry.

At the company level, MSM’s national accounts declined by the low single digits in Q2 2020 compared to a year ago. Its core customers fell by the mid single digits. Government sales growth declined by low teens during the same period. The rate of deceleration can pick up further as most of these customer groups can falter as the effects of COVID-19 become visible. (Investors may note that the quarter ending December 31, 2019, denotes MSM’s second quarter for 2020 or Q2 2020).

On the other hand, orders for safety and janitorial products, which produced relatively muted performance until March, can see a surge in demand in the coming months and can make up for some of the losses in the other sectors. The company’s order bookings for March were up by high single digits over the prior year, although revenue did not increase. The gap represents janitorial product scarcity, longer supplier lead times, and a larger-than-normal backlog in the company’s warehouses. In Q3 2020, the company expects these orders to translate into additional revenues.

What Are The Economic Indicators Saying? 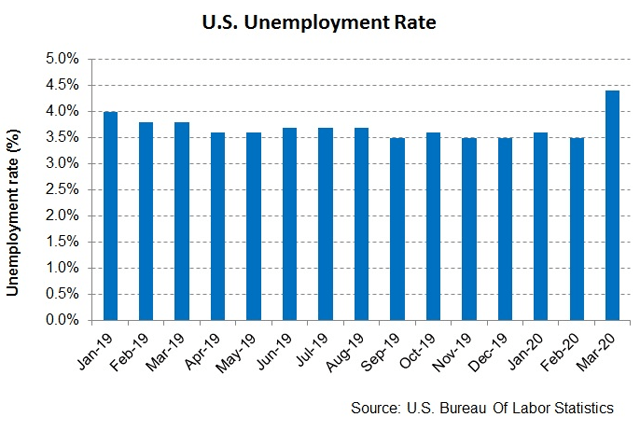 GDP growth rate: Similarly, according to fred.stlouisfed.org, the U.S. real GDP growth, when compared to the previous quarter, increased by 2.1% in Q4 2019. The U.S. GDP growth was generally healthy since Q4 2015, which is typically a bullish indicator for MSM’s growth. But the Q1 growth rate can fall significantly post the coronavirus outbreak. The ISM Manufacturing PMI in the U.S. fell to 49.1 in March of 2020 from 50.1 in February. PMI provides information about current business conditions. The March contract reflects the deceleration in the manufacturing sector and the energy market. 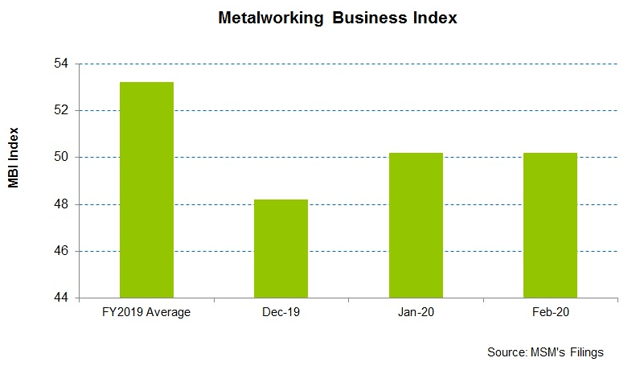 MBI Index Is On A Decline: A better gauge of MSM’s performance is the Metalworking Business Index (or MBI), which tracks the durable goods manufacturing from the U.S. metalworking industry. While MBI averaged 50 in the past 12 months, it trended down to 41 in March, which suggests that durable goods manufacturing has contracted due to the economic disruptions of the COVID-19 pandemic. During Q2 2020, 70% of MSM’s revenues came from sales in the manufacturing sector.

The epidemic has been disastrous to the energy sector in the recent period. Crude oil price has crashed by ~60% in 2020 so far. The U.S. onshore rig count has fallen by ~17% since the start of 2020. This week, Saudi Arabia and Russia agreed to cut production, which would eliminate the global supply by ~10%. Although this was a welcome relief after their earlier talk broke down, the cut was less than what many analysts expected. I think it would still act as a support to the energy price.

From Q4 2018 to Q4 2019, MSM’s revenues decreased by 4.5%, while its gross profit margin deflated to 42.1% from 42.7% during the same period. Quarter-over-quarter, too, its revenues were resilient in Q4. Revenues coming from the Mexico operation and the previously made acquisitions benefited the Q2 2020 results. However, it was more than offset by customer shutdowns in March due to the virus attack.

Looking closely at the customer group, we note that the company’s national account declined by low single digits, while core customers saw decline rates in the mid single digits. Sales in the government sector were the most adversely affected, falling by low teens in Q2 2020. 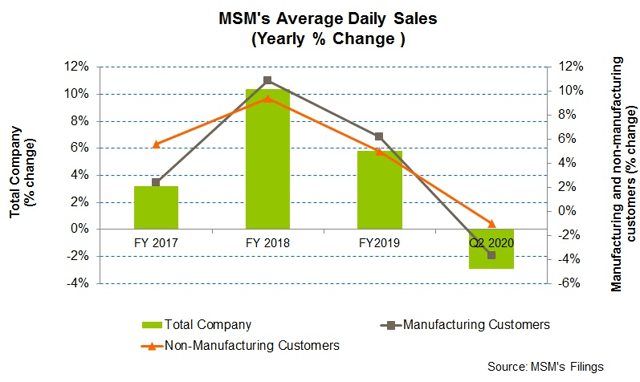 Gross Margin Fall Is A Concern 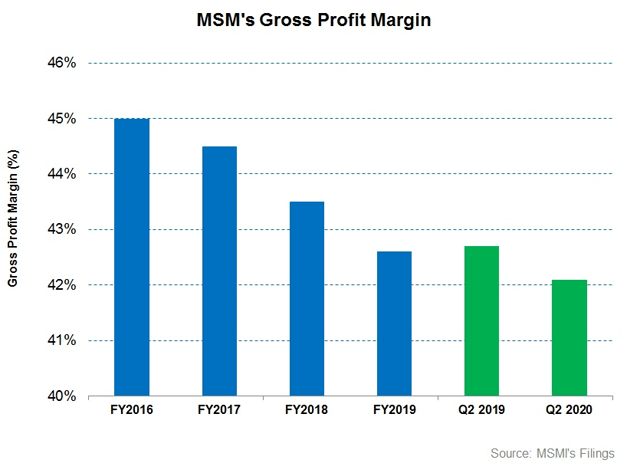 MSM has kept its dividend nearly unchanged for the past year at $0.75 quarterly dividend per share, which amounts to a 5.2% dividend yield. In comparison, Fastenal Company’s (FAST) forward dividend yield is lower (3.1%). Also, in February, MSM paid a special dividend of $5.00 per share.

In the first six months of FY2020, MSM’s cash flow from operations (or CFO) was 58% higher than a year ago. Although revenues decreased marginally during the same period, the company’s CFO increased on account of lower inventories and accounts receivable. Although capex increased in 1H 2020, free cash flow increased significantly due to higher CFO in the past year.

MSM has a relatively low debt-to-equity ratio (0.53x) compared to its peers (0.94x on average). Its liquidity, comprising of borrowings available under revolving credit facilities, cash, and cash flow from operations, was ~$772 million. Starting July 2023, it will have $243 million in debt repayment under the contractual obligation. So, the company has ample liquidity to manage its capex, debt repayment, and dividend payment.

MSM’s forward EV-to-EBITDA multiple expansion versus the adjusted trailing 12-month EV/EBITDA is steeper than peers because sell-side analysts expect the company’s EBITDA to decline more sharply compared to the fall in EBITDA for peers in the next four quarters. This would typically result in a lower EV/EBITDA multiple compared to the peers. However, the stock’s EV/EBITDA multiple is higher than the peers’ (HDS, DXPE, and WCC) average of 6.9x. So, the stock is relatively overvalued at this level. I have used analysts’ estimates provided by Seeking Alpha in this analysis.

According to data provided by Seeking Alpha, seven sell-side analysts rated MSM a “buy” in April (includes “very bullish”), while seven of them rated it a “hold.” None of the analysts rated a “sell.” The consensus target price is $49.7, which at the current price, yields 109% returns.

According to Seeking Alpha’s Quant Rating, the stock receives a “Neutral” rating. Its rating is high-to-moderate on value, profitability, and EPS revisions, while they are weak on growth and momentum.

What’s The Take On MSM?

In a pandemic-hit world, the U.S. unemployment rate has surged ahead at a historic rate in the past month, while the PMI index and the energy sector activities are bearish in 2020. Although the MBI index, which is a crucial indicator to understand MSM’s growth trajectory, held steady in the past couple of months, it was significantly lower than the FY2019-average. So, the company lacks a growth impetus in the short-term. The average daily sales decline was sharp in manufacturing customers, which has also put its gross margin under pressure.

Despite the sharp drop in demand elsewhere, I expect increased orders for safety and janitorial products, particularly from the government sector, due to the importance of hygiene. MSM has relatively low leverage and sufficient liquidity, the importance of which cannot be overemphasized in the current environment. I do not think it will produce positive returns in the short-term. It would be a while before the economic activities signal a comeback. Until then, investors better wait and not commit to investing in the stock.