MRC Global Will Withstand The Current Crisis With A Countercyclical Model (NYSE:MRC)

MRC Can Pull It Back

In the current circumstance, MRC Global (MRC) finds it essential to preserve liquidity and reduce costs to battle the ongoing energy demand crisis. The selling of higher-margin valve products can stabilize the cash flow as the valve products are typically countercyclical. However, the company’s revenues from the upstream end market will shrink in 2020. The downstream end market, too, is heading towards another dull quarter as the crack spread moves unfavorably. Plus, the line pipe pricing and margin can also deflate in the near term.

The company expects to generate significantly higher free cash flow in 2020, which will be critical in the current scenario. The company’s debt-to-equity ratio is on the higher side, which can become a concern in this recessionary environment. In the medium to long term, I expect the demand and supply in the industry to tighten, which can lead to better pricing and would provide a more stable entry point for investing.

An Insight Into Strategy: Counter Cyclicality 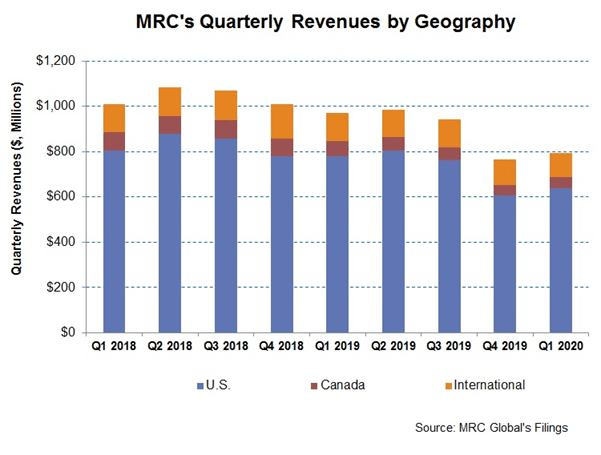 Very early in 2020, before the pandemic hit the market, MRC started investing in higher-margin product and service offerings by adopting a valve-centric strategy. That way, the company was investing in a new strategy that could insulate it from the cyclicality and volatility of a particular sector. However, the energy market crisis following the virus outbreak changed some of its approaches. As energy demand and, subsequently, the economies of the world, froze, MRC’s core business of providing pipe, valves, and fittings (or PVF) and other infrastructure products turned out to be countercyclical. Its management has focused on maintaining robust liquidity and cash flows to survive the downturn.

The company expects to generate significant cash flow from operations. It plans to pay down its asset-backed loans from FCF, which would leave the next debt repayment in 2024. Over the medium to long term, the company plans to maximize profit by restructuring costs and improve working capital efficiency, which would optimize its capital structure.

To further extend the initiatives to reduce costs, the company eliminated headcount by 73 and closed two facilities in Q1 2020. It plans to reduce headcount by over 200 and close 14 more facilities in Q2 and Q3. The steps will also help lower the SG&A costs by reducing employee benefit programs and selectively furlough personnel, leading to an aggregate $80 million reduction in SG&A in FY2020 compared to FY2019. In contrast to the traditional oilfield services companies which have high overhead costs, MRC typically maintains a high inventory level, which it can sell quickly and produce cash. So, when the industry cycle reaches a low, it maintains a higher cash balance. It can also adjust personnel in response to demand, including regional distribution of workforce and furloughing. As a result, its SG&A costs are relatively stable. Although it did move up in Q4 2019, the company pulled it back in Q1. In this context, you may take a look at my latest articles on Schlumberger (SLB) here and Halliburton (HAL) here.

In digital technology, the company has brought an efficient solution platform called MRCGO, which is a cloud-based portal that offers solutions for efficient transactions. Currently, 29% of its total revenue is generated through e-commerce. The management expects the share of e-commerce to grow over the next two years, accelerated by social distancing and other health safety measure norms.

Before we discuss the current drivers, let us see the major projects that have come up. It signed a new enterprise framework agreement with Noble Midstream and another agreement with TOTAL S.A. (TOT) for valves in Europe and West Africa. The gas utility prospect brightened after the company signed a couple of contracts with Ameren Corporation (AEE) and Eversource Energy (ES). I think the company is gaining market share in the gas utility business fast. Despite its strategic importance, the strategic shift towards natural gas-directed utility market can be underwhelming in the short term.

The crude oil price volatility reflects the tipping balance in the energy demand-supply situation around the world. Since April 2020, it has recovered by 18% as the prospect of travel curb lifting in some parts of the globe improved. This was a welcome relief after the price tanked (66.5% down) on fear of lower trade following the outbreak of coronavirus from January to March. On the other hand, the U.S. rig count decline rate has accelerated (44% down since the start of April), but that is also because rig count typically follows the crude oil price with a lag.

As a result of the factors discussed above, MRC’s revenues from servicing the upstream industry decreased sharply, by 29%, in Q1 2020 compared to a year ago. The company’s management does not have better expectations in 2020. This upstream market is expected to suffer the most from the customer budget reductions, which can vary from 50% (in the U.S.) to 10% (international market), according to various estimates. The majority of the sales decline took place in the Permian, where the company’s sales declined by 43% year over year. In this region, the upstream operators are cutting down their capex budget by 40% to 50% in FY2020. However, the company’s year-over-year midstream sales in the Permian improved in Q1 after the takeaway capacity improved.

The company’s management expects the pricing pressure to continue throughout FY2020. MRC generates 41% of its total revenues from valves, automation, measurement & instrumentation (or VAMI), which is typically a high-margin business line. Despite the supply chain disruption from China and Italy, the management is confident of a positive outlook in this category because of its ability to carry inventory. In FY2020, the company expects the share of revenue coming from the valve product line to increase to 42%.

On the other hand, the company expects line pipe pricing to fall more severely during the current recession. It estimates that line pipe spot pricing went down by ~$50 per ton in Q1, and will continue to fall in Q2.

What Does The Line Pipe Price Index Signify?

The line pipe price index decreased by 3.5% in the past year until March, while relative to Q4 2019, the average line pipe prices declined by 2% in Q1 2020. Line pipe pricing has been under pressure due to soft demand, an oversupply in the small-diameter pipe, and higher inventory cost. Given the inventory-build, I expect the pricing to stay pressured in Q2 as well.

Analyzing Performance In Midstream And Downstream 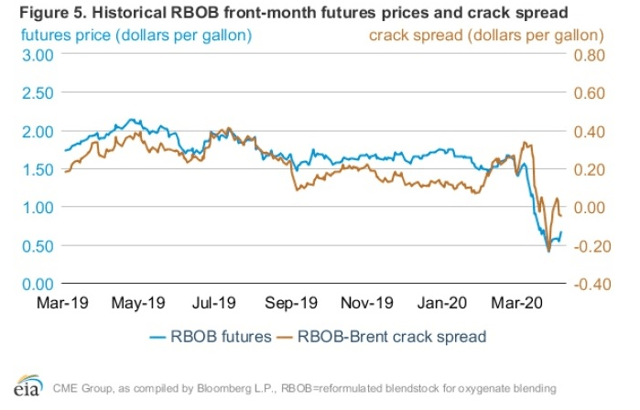 MRC’s revenue from the midstream activity remained steady (1% up compared to Q4 2019). However, investors should note that the midstream has a strong correlation with the upstream business, but with a time lag. In downstream, the Q1 2020 revenues increased by 3% compared to a quarter ago. From EIA’s Short Term Energy Outlook, we note that the U.S. average retail gasoline prices declined by 17%, led by the fall in gasoline demand as a result of the decline in travel following the outbreak of COVID-19. However, as I discussed above, the crude oil price decreased more sharply during this period. So, the crack spread, which measures the difference between the selling price of the finished products and the purchase price of crude oil, dropped. If the spread stays low, the profitability in this sub-sector will not improve.

The gas utility business was relatively resilient in Q1 2020, as revenues decreased by 6% in Q1 2020 compared to Q4 2019. This sector currently accounted for 25% of MRC’s Q1 2020 revenues. The segment also provides cash flow stability because it is driven by the integrity management programs in the U.S., which are long term in nature. Also, the new housing and business construction projects have been relatively steady in recent months, which protected the revenue loss in the ongoing crisis.

In Q1 2020, MRC’s cash flow from operations (or CFO) turned positive compared to a negative CFO a year ago. As revenues decreased in the past year, its working capital requirement reduced, led by lower accounts receivable and inventory balance, which led to the improvement in CFO. Since the company’s capex is insignificant, it generated positive free cash flow ($35 million) in Q1 2020. In FY2020, it plans to generate more than $200 million in CFO, which would help reduce working capital-to-sales ratio below 20% by the end of the year.

According to data provided by Seeking Alpha, six sell-side analysts rated MRC a “buy” in April (includes “very bullish”), while seven recommended a “hold.” None of the analysts rated it a “sell” or “very bearish.” The consensus target price is $6.78, which at the current price, yields ~48% returns.

What’s The Take On MRC?

As the energy industry flounders under the COVID-19 pressure and the upstream companies continued to tighten their 2020 E&P budget, it is nearly certain that MRC’s revenues from the upstream end market will shrink in 2020. The deceleration, however, will be less pronounced in the midstream because the PVF pipes industry is expected to play a countercyclical role in this downturn. The downstream end markets, however, are not in good shape as the crack spread gets into the negative territory.

In the current circumstance, the company has shown prudence in shifting its strategy in preserving liquidity and reducing costs. Despite the lack of demand, it has recently bagged a few critical projects to keep revenues flowing in 2020. On top of that, the selling of higher-margin valve products can lend stability to the current volatility. The company expects to generate significantly higher free cash flow in 2020, which will be critical in the present scenario. I do not think the returns from the stock can improve much in the short term. However, once the energy industry and economy settle down, MRC will be able to turn it around without much difficulty.

Previous PostAnother Leg Lower Is Coming, But What Happens In 2021 Will Leave Traders SpeechlessNext PostWorking from home: Estimating the worldwide potential