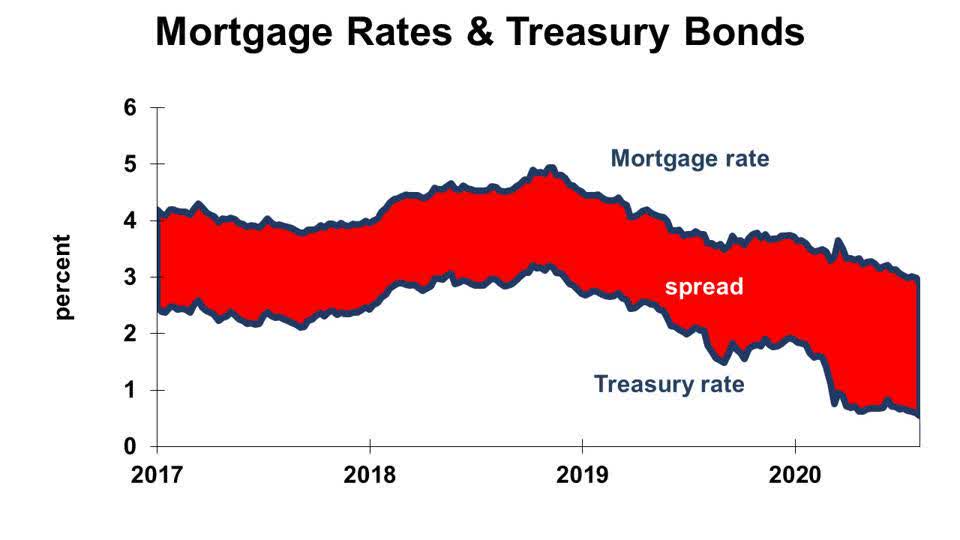 DR. BILL CONERLY BASED ON DATA FROM FEDERAL RESERVE AND FREDDIE MAC

Mortgage refinance costs swung up due to a new fee, which some are calling a tax. The eventual path to lower rates (which I recently predicted) will be slowed, but not entirely stopped. The announcements by Fannie Mae and Freddie Mac say the lump-sum fee of one-half a percent of the loan balance applies to refinances on single family homes. It does not apply to construction loans converting to permanent loans nor to mortgages for home purchase.

Fannie and Freddie are government-sponsored enterprises, which is a little confusing in itself. They are enterprises, meaning they have profit and loss statements. But they are government-sponsored, so their debt is treated kind-of-like government debt. They can pay lower interest rates than private companies would have to pay. With that advantage, they have near-total control of the market for mortgages that conform to their guidelines.

Emmons’ analysis of data from the spring of 2020 found that most of the wider margin of retail mortgage rates over treasury bond yields was due to retail spread. Emmons confirmed to me by email that more recent data continue that pattern. Basically, the company that the homeowner goes to for a refi is pocketing higher revenue. A portion of the higher revenue covers higher costs of operating during the pandemic, but most of the revenue flows through to profits.

The new fee is Fannie’s and Freddie’s attempt to capture some of the profits to build up their reserves. The immediate effect was that mortgage rates jumped up, perhaps out of anger or irritation by mortgage processors.

To determine the effect of the fee on the mortgage rate that a typical refi customer is quoted, we begin with basic supply and demand. In a typical textbook example, an increase in costs through a tax or necessary fee is usually passed through, partially, to customers. Some of the tax cannot be passed through, so it lowers the seller’s profit.

However, this would not be the case if capacity was limited. Sometimes a seller cannot expand supply, at least not as fast a demand is growing. That is the situation now. The demand for refis grew hugely when interest rates dropped, and the mortgage industry could not expand fast enough. Mortgage companies and banks could have turned customers away, but instead they raised their profit margin.

In such a case, the tax would be borne entirely by the sellers and not at all by the consumers. If the mortgage companies bumped up their rates to cover the cost of the new fee, some customers would decide not to refinance. Mortgage companies would have unused capacity, and some would cut rates to bring customers back in. Competition among sellers would bring the price back down.

So at a point in time, this fee appears to be bad news just for mortgage industry profits and not for homeowners looking to refinance their mortgage.

However, the industry’s capacity constraint is not fixed. Indeed, the industry has been expanding as fast as it could to serve the millions of people looking to refi. The new fee will lower profits, so the mortgage industry will expand less rapidly. That will slow the decline in mortgage spreads. And spreads will never return to the lows they had previously seen, because of the higher cost. So the fee looks benign for a day or two, but not afterwards.

Mortgage rates will continue to decline from the current level, but not as fast, nor as far, as would have happened if Fannie and Freddie not chosen to add this fee.