When Jay Clayton takes calls from America’s top bankers, more often than not James Gorman of Morgan Stanley is on the line.

The chairman of the Securities and Exchange Commission has had more private contacts with Mr Gorman, the Morgan Stanley chief executive, than the head of any other big Wall Street bank, according to the regulator’s public calendar.

Documents obtained by the Financial Times show their 10 formal contacts since 2017 include four calls in which Mr Gorman briefed Mr Clayton on the bank’s quarterly earnings ahead of their release. They also had a 2018 meeting where the SEC chairman, as Morgan Stanley’s top lobbyist described it in an email, sought the banker’s “thoughts on areas of potential regulatory overlap/inefficiencies in the supervisory space”.

The interactions provide a glimpse into the dealings of Mr Clayton, who was appointed to the commission by President Donald Trump after a long career as a Sullivan & Cromwell lawyer advising the likes of Goldman Sachs. Morgan Stanley was not one of his clients at the firm, according to disclosures made when he was nominated.

The contacts also highlight Mr Gorman’s efforts to maintain a personal
line of communication with a powerful regulator. They contrast with his peers. Jamie Dimon of JPMorgan Chase, Goldman’s David Solomon and Mike Corbat of Citigroup have each had a single one-on-one call or meeting with Mr Clayton over the past three years, according to Mr Clayton’s calendar. Brian Moynihan, Bank of America’s chief executive, appears once on his calendar at a 2019 meeting that included Mr Dimon and top US officials.

An SEC spokesperson said: “As is evident from his calendar, which is publicly available, chairman Clayton has made a point to make himself available to market participants of all kinds, ranging from retail investors to exchanges to advocacy groups to financial institutions to issuers.”

Mr Gorman, who has run Morgan Stanley for a decade, has a longstanding custom of briefing senior regulators at several agencies, according to two people familiar with the matter. One of the people said Mr Gorman made the calls as a “courtesy”, so that regulators would not hear news about Morgan Stanley second-hand.

Mr Clayton’s calendar, which has been published up to April this year, shows nine calls and the one meeting with Mr Gorman since he took office in May 2017, often around the bank’s quarterly earnings releases or other significant bank announcements. The calendar of Mr Clayton’s predecessor at the SEC, Mary Jo White, shows a similar pattern of calls from Mr Gorman.

Mr Gorman and Mr Clayton spoke on the telephone in February, March and April this year, months in which the bank announced its $13bn acquisition of online trading platform ETrade and revealed the initial impact of the coronavirus pandemic on its profits.

In 2018 and 2019, Mr Gorman briefed the SEC chairman on the bank’s earnings on four occasions and also gave him a heads-up on a “firm management change” shortly before Morgan Stanley’s long-serving number two, Colm Kelleher, stepped down, according to emails obtained by the Financial Times through a public records request. Mr Gorman and Mr Clayton also spoke once on the phone in June 2017.

Senior finance industry figures said their companies generally brief banking regulators ahead of earnings, but that the work is not routinely done by chief executives or necessarily with top regulatory officials in Washington.

“If there’s a CEO calling every one of the regulators every quarter, I’m not saying there’s anything wrong with that but it would be the exception rather than the rule,” one former bank chief executive told the FT.

Several former SEC officials said banks and other public companies did not typically brief the commission about their earnings in advance, unless there was a specific and imminent need to do so.

“A regular routine communication . . . that seems unusual and unnecessary, and calculated to ingratiate,” said one former SEC official.

The SEC, as a markets rather than a banking regulator, does not have prudential responsibility for banks like Morgan Stanley. However, it has regulatory authority over important functions of the company, like its sizeable retail brokerage and investment advisory unit, which the SEC has repeatedly fined for alleged infractions in recent years.

At a September 2018 meeting, Mr Clayton asked Mr Gorman and Eric Grossman, Morgan Stanley’s chief legal officer, for their “thoughts” on how banks are supervised, according to a follow-up email from the bank’s top lobbyist.

The lobbyist, Michael Stein, wrote in December 2018 to Mr Clayton’s then chief of staff, Lucas Moskowitz: “According to Eric, the three left it with our senior regulatory staff getting back with your key staff to share our thoughts on his request.” The bank had put together a “short deck” to present at a follow-up meeting, Mr Stein added. 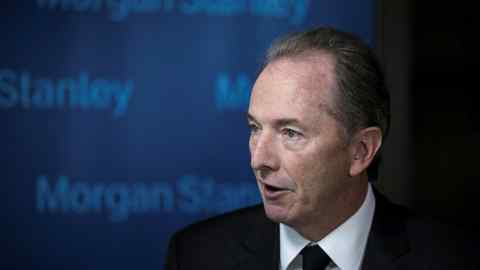 “Frankly, it’s exactly what the regulators did prior to the ’08 crash when regulators worked hand in hand with the industry to make sure the industry wasn’t regulated or policed,” he added.

The first former bank boss defended the exchanges. “Some would look at that and say it’s too cosy a relationship . . . at another level, [the bank] is your customer, don’t you want feedback?”