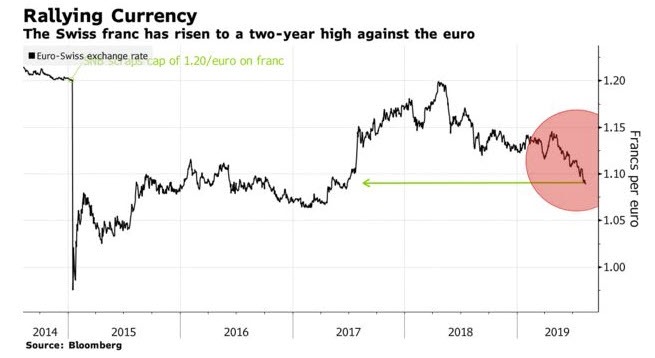 The Swiss National Bank may have to do more than pump billions into foreign exchange markets into prevent the franc from appreciating to a damaging level.

With data suggesting the central bank recently intervened after the currency rose to the highest since 2017 against the euro, an increasing number of economists also expect the SNB to reduce its benchmark interest rate. Five respondents of 17 in Bloomberg’s monthly survey now see a cut of up to 25 basis points this quarter, compared with just one in July.

With the franc up more than 4% versus the euro in the past three months and the European Central Bank expected to unleash new stimulus, the SNB is under close scrutiny for possible action it will take to contain the currency’s strength. Sight deposits jumped almost 2.8 billion francs last week, the most in more than two years and a sign the central bank has been intervening in currency markets.

Well, I am sure there are some other minor counties like Sudan or Uganda. Perhaps Mexico or Russia.

Meanwhile, prepare for an escalation of the currency war and more Monetary Madness such as Inverted Negative Yields in Germany and Negative Rate Mortgages.

And expect more howls from Trump.

READ ALSO  Greece's participation in CIIE to further boost trade relations with China
Previous PostLooking forward to it! Pennsylvania is doing great, and so is our country! Today…Next PostCome on FC!! Everyone in white tonight!! #fckøbenhavn #forzafc #championsleagu…