On balance, I maintain a strongly bullish view on Momo (MOMO) following a review of its 4Q19 results. The stock, by my calculations, has moved to near-distressed levels. Excluding net cash and Tantan, Momo’s core business is only trading at ~4x fwd P/E, a compelling valuation for a growing cash cow business with a track record of >25% net profit margins. Despite concerns about intensifying competition and depressed market sentiment following the Covid-19 outbreak, current valuations offer more than sufficient margin of safety, in my view, and thus, I would be a buyer of the stock at these levels.

FY20 guidance is conservative, with a YoY decline guided for 1H20 live streaming revenue, as indicated by a) slower-than-historical traffic recovery post-CNY and b) reduced spending by higher spending users due to the COVID-19 outbreak. Also notable was that Tantan’s (Momo’s dating app) user engagement had been hurt post-CNY amid a drop in casual dating demand in most cities, though the business has posted healthy sequential user growth in early 1Q20. Further, revenue-sharing ratios are set to increase for talent agencies and live broadcasters to cope with stiffer competition and elevated marketing spending to drive user growth.

READ ALSO  The Fed Will Monetize All Of The Debt Issuance

VAS Emerging as the Growth Driver

Revenue from live video services grew 14.3% YoY to RMB3.4bn in 4Q19, thanks to the company’s strategy of using different products and operational efforts to target different user cohorts. In December 2019, Momo’s number of monthly active users (MAUs) reached 114.5m, implying a slower 1.1% YoY growth (vs. 14.3% YoY in 4Q18 and 3.3% YoY in 3Q19) due to intensifying competition for user acquisition. 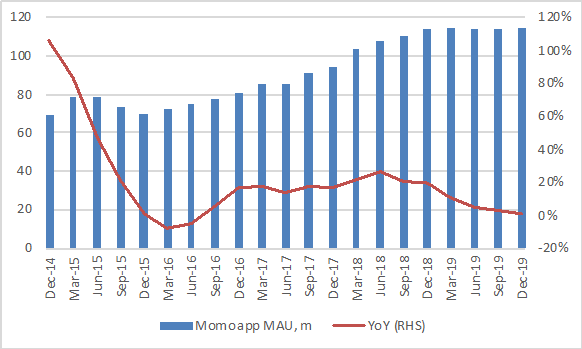 Total paying users of the core Momo platform reached 9.3m by end-4Q19, a net addition of 0.4m QoQ. Despite weak MAU growth, the retention rate in 4Q bounced back to the pre-suspension level, and user time spent per day reached a record high in two years. 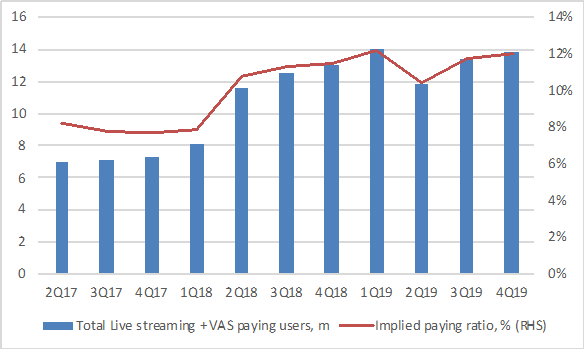 Total value-added services (VAS) revenue reached RMB1.2bn in 4Q19 (+64.6% YoY), driven by strong growth of the virtual gift business on the Momo app and increase in membership subscriptions revenue from Tantan. VAS revenue for the Momo app during 4Q19 grew by 64.1% YoY to RMB819.3m, driven by the launch of new functions and the introduction of new paying scenarios for virtual gifting within the Momo app.

VAS looks set to be the growth engine in FY20 as several revenue-enhancing initiatives are rolled out. For instance, management plans to better monetize its “chat room” by directing more traffic to higher average revenue per user (ARPU) channels and target lower-tier cities through Momo Lite. These initiatives should drive upside to both the user base and the overall ARPU profile.

For the first time, Momo disclosed a separate breakdown of Tantan’s financials. Unsurprisingly, the results were impressive – Tantan’s gross margins of 65% were noteworthy; however, sales and marketing expenses remain elevated and continue to weigh on margins.

I would also note that Tantan’s total paying user base stands at 4.5m in 4Q19, flattish QoQ due to 1) downward pressure on the retention ratio due to the tighter content reviewing policy and anti-spam measures resulting in the company mistakenly identified good users as spammers, and 2) a change to the iOS 13 subscription management policy, which led to higher churn rate among paying users. With Tantan able to identify the issue of user retention by late November 2019, the retention rate has returned to pre-suspension levels by mid-January 2020.

Tantan has also encountered significant pressure on new registrations since mid-February 2020 due to social distancing control following the COVID-19 outbreak. Nevertheless, I would point to green shoots of a recovery, with the company noting rapid user growth post-CNY and before mid-February, thus the overhang should gradually ease once conditions normalize.

FY20 Outlook: Beyond the COVID-19 Outbreak

As China has made substantial progress on COVID-19 outbreak control, the government has gradually eased restrictions on offline activities. This should translate into the resumption of social and dating activities from 2Q20 onward. ARPU recovery may be slow at first, given the sentiment of paying users was initially impaired by the uncertainty in the economic recovery, and thus, it will likely take time for consumer confidence to recover and eventually translates into a pick-up in discretionary spending.

Nevertheless, I remain confident about Momo’s capabilities in monetizing its existing user base. The company has been successful in that regard during FY19, launching a nobility system (which rewards high spenders) and introducing Family Game as alternate live streaming gamification, both of which have received positive feedback from users.

Management’s move to reap low-hanging fruits, for instance, via monetizing its “chatroom” by directing its traffic to higher-paying commercial lines and rolling out new non-subscription monetization features, should help extend the reinvestment runway for Momo. All of these initiatives, in my view, should lead a U-shaped revenue recovery post-outbreak, translating into a back-end-loaded growth scenario in FY20.

Valuations are too cheap to ignore

Momo’s share price has declined by 45% since January peak, mainly on investors’ concern around the COVID-19 impact on Momo/Tantan business outlook, as well as near-term margin pressure amid rising competition. The stock now trades at a headline ~8x fwd P/E, which implies near multi-year trough levels. More interestingly, Momo “core” now trades at an implied 4.1x fwd P/E as implied by its current market cap if we exclude both Tantan valuation and net cash (accounting for a third of its market cap) from the Group.

Overall, I see Momo as an undervalued cash-cow business with strong, medium-term growth prospects. The impact from the COVID-19 outbreak and interactive feature removal, in my view, will prove to be an FY20 blip, before growth resumes FY21 onward as open social demand resumes, helped by the launch of several new monetization initiatives. Thus, I expect Momo’s five-year derating cycle has troughed and should subsequently reverse in FY20. 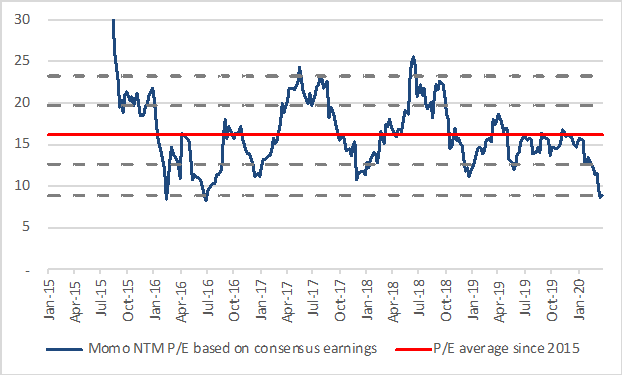