Looking for companies with a decent growth story has been a bit difficult in this market given that we are trading at new all-time highs. However, I believe Molsoon Coors (NYSE:TAP) presents a pretty compelling opportunity.

Just a brief background on the company, Molson Coors is one of the largest beer companies in the world. The company has a wide array of brands which include major brands like Blue Moon, Miller, Coors, Molson Canada as well as smaller specialty beers.

In 2015, Molson Coors acquired full control of the Miller business from SABMiller (OTCPK:SBMRY) massively boosting the company’s revenue and debt in the process. In the three years following the acquisition, the company has seen revenue start to decline by a CAGR of 1.3%. There were a mix of factors attributable to this decline. The primary reason is the rise in popularity of craft beer which began eating away market share of its light beer. In 2019, despite the large portfolio of beverages sold, the company primarily relied on a handful of brands for a large portion of its sales primarily Miller Light and Coors Light in the US market. The company needed something to shake things up in order to remain relevant. In late 2019, the company announced a “revitalization plan” to improve profitability and boost growth. 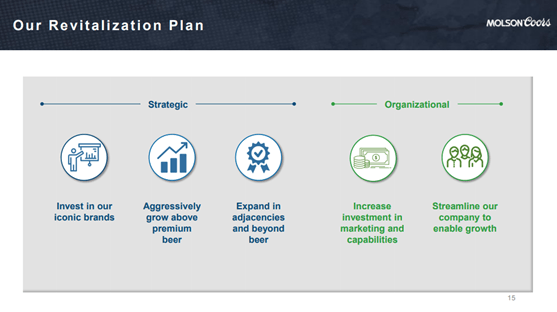 These plans were temporarily put on hold given the backdrop of a difficult business environment due to COVID. Molson Coors performed about in line with its peers in Q2 2020. Net sales fell by 15.1% during the quarter compared to the same time last year. Most of the company’s sales (roughly 77% in 2019) are from the North America segment. However the bulk of the revenue decline this quarter was driven by the European segment which has seen revenue fall by 44.6%. Most of the company’s products in Europe were consumed “on premise” (i.e. restaurants and bars), therefore the lockdowns and closures had a massive effect on sales. North American revenues only declined by 8.3% as the closure of restaurants and bars were offset by the increase in home sales. In 2019, approximately 17% of North American sales and 55% of European sales were from on premise channels. I believe this is reflective of the brands stronger position in North America. The company ended the quarter with a net debt position of $7.9 billion comprised of $8.7 billion in debt and $780 million in cash.

The short-term continued impact of the virus is concerning as a potential investor in this company especially in light of the company’s debt load. However, even more worrying for the company’s future prospects is the fact that overall beer consumption seems to be trending lower (down 2.3% in 2019). The bulk of the decline was driven by the “domestic beer” category which Miller and Coors are a part of. Domestic beer declined by 3.6% yet craft beer and no/low-alcohol beer saw increases in consumption by 4.1% and 6.6% respectively.

As part of the plan to trim down costs, the company had recently undergone a restructuring effort by moving offices, consolidating back-office functions and simplifying corporate structure. Comparing the company’s EBIT margins with its peers we can see that the company had a five-year EBIT margin of 13.9%. This is about in line/only slightly lower than its global peers, but a far cry from Anheuser-Busch’s (NYSE:BUD) five-year average EBIT margin of 30.8% indicating that there are still cost efficiencies to be had.

On the revenue side, the company is accelerating new product development and entering drink categories even beyond its traditional beer categories. Despite the disruption caused by the coronavirus pandemic, the company launched several new brands this year namely Blue Moon Light Sky, Vizzy and the Coors Seltzer. Vizzy and Coors Seltzer are particularly important as it is the company’s long-awaited foray into the popular hard seltzer category. Another development to watch is that the company recently revealed its long-awaited cannabis-infused beverage line-up to be launched in Canada.

Furthermore, Molson Coors also recently announced its first expansion into non-alcoholic brands with the Huzzah full flavored seltzer with probiotics (non-alcoholic). As mentioned, expanding beyond beer is one of the core components of the company’s “revitalization plan”:

“We’re following through on our promise to seek out new opportunities beyond beer, and we’ll continue to innovate and move into new spaces as it’s an important part of our long-term strategy,” said Pete Marino, president of emerging growth for Molson Coors Beverage Company. “This is just the start of our entrance to the marketplace with breakthrough brands, and we couldn’t have a better partner to embark on this journey with than LA Libations.” – Molson Coors Expands Beyond the Beer Aisle With New Slate of Non-alcoholic Products, in Partnership With L.A. Libations

This product couldn’t be more different than the company’s traditional beer products as it is a “healthy drink” that is low on both sugar and calories. The product was developed in partnership with a third-party, L.A. Libations, which the company owns a minority stake in. Other products in the company’s pipeline include a plant-based diet soda, a grain-based milk alternative and a nootropic performance beverage.

In theory expanding the company’s product line makes sense as there are some economies of scale to be had with regard to distribution. In other words, the company already has existing distribution, so it’s cost effective to add more products. I also applaud the company’s efforts to diversify its revenue away from light beer.

However, its execution seems to be a little unfocused and has a “let’s throw everything to the wall and see what sticks” feel to it. The marketing chops required for a “grain-based milk alternative” is radically different than what is needed for a product like Miller Light. That said, I’m not ready to write off the company just yet as CPG firms can and do have multiple (and sometimes competing) brands. I am just saying that there is some execution risk with regard to launching these many products each of which is a totally different market segment.

Disclosure: I/we have no positions in any stocks mentioned, but may initiate a long position in TAP over the next 72 hours. I wrote this article myself, and it expresses my own opinions. I am not receiving compensation for it (other than from Seeking Alpha). I have no business relationship with any company whose stock is mentioned in this article.

Additional disclosure: Caveat emptor! (Buyer beware.) Please do your own proper due diligence on any stock directly or indirectly mentioned in this article. You probably should seek advice from a broker or financial adviser before making any investment decisions. I don’t know you or your specific circumstances, therefore, your tolerance and suitability to take risks may differ. This article should be considered general information, and not relied on as a formal investment recommendation.