Molson Coors (TAP) has been impacted by COVID-19, as has the global economy overall. However, Molson Coors has also suffered from its lack of exposure to the craft beer market. These factors must be assessed in looking at whether or not Molson Coors is a value opportunity or a value trap.

On the surface, Molson Coors does appear to be a value opportunity. At close of market on 06/05/2020, Molson Coors traded at a share price of $42.40. As trailing earnings-per-share are -$0.13, there is no trailing price-to-earnings ratio. The stock’s forward P/E is 12.10, based on forward EPS of $3.50, which is significantly less than the five-year average P/E of 27.01. This suggests that Molson Coors currently trades at a discount to fair value, but what is fair value here?

To get an established alcoholic beverages firm like Molson Coors at a 42% discount would seem like a no-brainer at first glance, particularly the fifth-largest brewery in the world, the firm behind brands such as Blue Moon, Carling, Coors Banquet, Coors Light, Crispin Cider, Hop Valley, Milwaukee’s Best, Olde English, Redd’s, Terrapin, and the various beverages under the Miller and Molson brands. 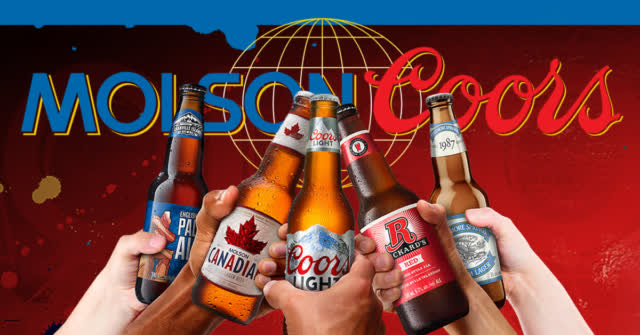 Molson Coors is the fifth-largest brewery in the world, with a large portfolio of branded alcoholic beverages. Image provided by Brewbound.

However, misgivings about making such an investment should stir when looking at the revenue and net income figures reported over the past five years.

As you can see, the figures start to decline in 2018, well before COVID-19 emerged on the scene. The pattern seems likely to continue into 2020, as Q1 figures for this financial year saw reported revenue of $2.1 billion, and net income of -$117 million. The chief problem that has afflicted Molson Coors in recent years has been a lack of innovation – in particular, the craft beer market has largely passed the firm by.

To its credit, Molson Coors has been cognizant of the issue, and has seen fit to try and redress this. In January it acquired Atwater Brewery, a Detroit-based company which offers beverages such as Dirty Blonde and Vanilla Java Porter. And in April, a deal was announced where Molson Coors would partner with Hexo (OTC:HEXO) to explore opportunities for non-alcoholic hemp-based CBD beverages in Colorado. However, it still has aways to go to gain ground on its competitors: Anheuser-Busch Inbev (BUD), Heineken Holding N.V. (OTCQX:HKHHF), Asahi Group Holdings, Inc. (OTCPK:ASBRF) (OTCPK:ASBRY), and Kirin Holdings (OTCPK:KNBWF) (OTCPK:KNBWY).

Sales of the leading beer companies worldwide in 2019. Figures collated from Statista.

COVID-19 has certainly exacerbated Molson Coors’ position. Volume is down as a consequence, and reported free cash flow of -$243.2 million has necessitated the scrapping of the dividend in late May. The balance sheet demonstrates the necessity of the dividend cut: long-term debt of $8.14 billion is slightly edged out by a net worth of $12.94 billion, and the total current liabilities of $4 billion only slightly edges out total current assets of $2.37 billion, cash-on-hand worth $666.1 million, and total accounts receivable of $744.9 million. And with earnings-per-share growth over the next five years projected to be -6.76%, the outlook is far from rosy.

In summary, while Molson Coors may seem attractive at a 42% discount to fair value due to its portfolio of well-known alcoholic beverage brands and its attempts to bolster its offerings through moves like the Atwater Brewery acquisition and the Hexo partnership, its debt burden, suspended dividend, and considerable trail behind its competitors lead me to consider Molson Coors as more of a value trap than a value opportunity.