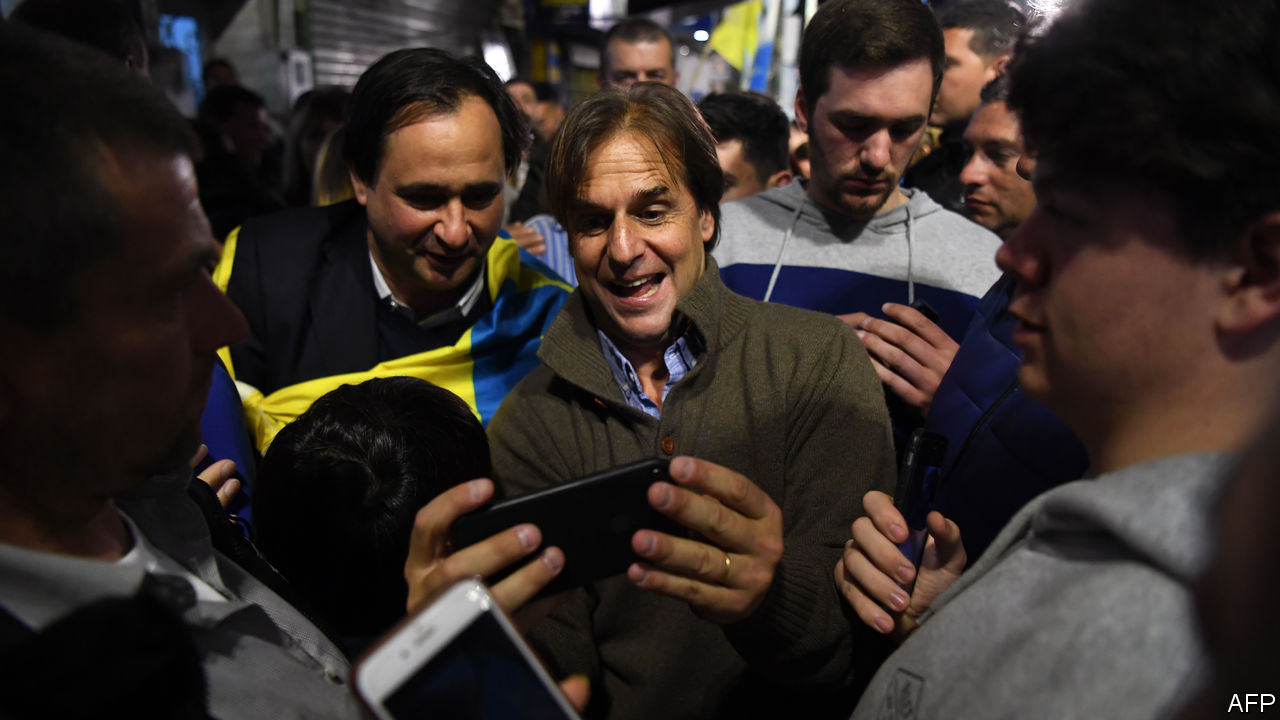 URUGUAY IS “a small country, locked between two monsters”, Argentina and Brazil, says Luis Lacalle Pou, the front-runner to be its next president. But “we are the fence in between, the anchor of stability in our region,” he says just before addressing a noisy rally in Colonia de Sacramento, a former citadel just across the River Plate from Argentina.

Uruguay, with just 3.5m people, is not weighty enough to be an anchor, but it does provide an example. It is prosperous and liberal, has low corruption by regional standards and its politics are temperate. (That may have something to do with its demographics; its population is the oldest in Latin America.) With Chile, the other paragon of stability in South America, convulsed by riots, Uruguay looks even better. Mr Lacalle says it will remain “the voice of pragmatic progress” if he wins.

That is likely to be so even if he loses. His main opponent, Daniel Martínez, belongs to the ruling leftist Frente Amplio (FA, or Broad Front) coalition, which has governed for 15 years. It has overseen steady economic growth and liberalised social policy. In 2013 it allowed same-sex marriage and became the first country to legalise cannabis for recreational use. An engineer who calls himself a “passionate socialist militant,” Mr Martínez promises both continuity and change from the government of the outgoing president, Tabaré Vázquez. “Keep what’s good. Make it better” is his slogan.

Mr Martínez is expected to come top in the first round of voting on October 27th. But polls suggest that Uruguayans want a bit more change than he is offering. In a run-off, which would be held on November 24th if no candidate wins more than half the vote, Mr Lacalle of the conservative National Party would have an edge.

The main issue on voters’ minds is crime, says Ignacio Zuasnabar, a pollster. Although Uruguay is safer than most South American countries, murder and armed robbery are at record levels. “The criminals kill for a few hundred pesos, they have no shame and often no punishment,” says Alfredo Depaulo, a driver in Villa de Cerro, a working-class district of Montevideo that is a stronghold of the FA. “This time I’m voting for the opposition.” Carmen Rosillo, a pensioner, says she is scared to leave her house. “The government has given us poor people a lot, but I want a party that will protect us from criminals,” she says.

That sentiment is likely to benefit the political right. Guido Manini Ríos, a former army chief, is campaigning on a law-and-order platform. He is vying for third place with Ernesto Talvi of the Colorado party, which used to be Uruguay’s main liberal force. Mr Lacalle, who promises a revamped police force with a “strongman” presence on the streets, hopes to pick up their supporters in the second round.

Some Uruguayans want to go further. They will be voting on election day in a referendum that would change the constitution to toughen law enforcement. It would create a military-style national guard that would operate alongside the police, allow night raids by police and stiffen prison sentences for some crimes. The proposals are divisive. On October 22nd 55,000 people demonstrated (peacefully) in Montevideo against the measure. But it is unlikely to swing the presidential vote. Mr Martínez opposes the changes. Although a senator from the National Party launched a movement—Vivir sin Miedo, or Live without Fear—that helped drum up support for measures, Mr Lacalle himself has said he will not vote for them.

READ ALSO  Taibbi: 10 Ways To Call Something Disinformation Without Evidence

Voters also worry about the economy, whose growth is expected to slow to 0.6% this year, largely because its neighbours’ economies are weak. Both of the leading candidates agree that to sustain growth over the long term Uruguay will have to cut its budget deficit, now about 5% of GDP, largely by reducing welfare payments. Mr Lacalle advocates “shock treatment,” a spending cut of $900m, about 1.5% of GDP. Mr Martínez wants spending cuts to be gradual.

Mr Lacalle, the son of a former president, has already started negotiations on a possible coalition government with the Colorados and Mr Ríos’s Open Forum. Perhaps wary of frightening voters who have prospered under the FA, he plays down the idea that his presidency would mean the end of an era. Uruguayans want change, he says, but without upheaval. Perhaps that is because Uruguay’s giant neighbours have had too much of that.