Have you ever been to a diamond mine?

No? I haven’t either, apparently because I neither live in Arkansas nor have reason to visit it very often, if ever. As I just learned, that’s where the only even semi-operational diamond mine in the U.S. is located.

Yet, exclusive though it is, Crater of Diamonds doesn’t come close to cracking the world’s top 10 – which, together, amount to one billion carats of recoverable “4-C” jewels. Mining Technology writes that Russia is home to half of the 10 largest, as measured by measurable reserves.

Botswana features two, with Angola, Canada, and South Africa each accounting for one.

That last entry might surprise you considering all the controversy surrounding the commodity. Yet South Africa doesn’t crack NS Energy’s “Top Five Diamond Mining Countries in the World” list either. Those spots go to:

And here are a few other interesting factoids from that article: 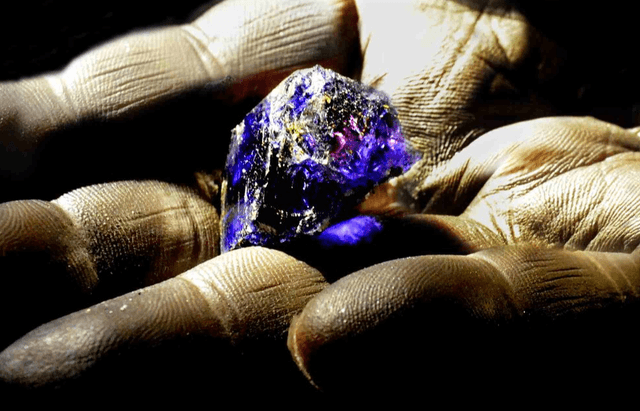 Pick Your Own Diamonds

Back to that itty-bitty, barely operational mine in Arkansas though…

Geology.com takes a guess that you might “love to have an opportunity to mine for diamonds yourself.” In which case, you could be in luck, again, provided you’re nearby or willing to travel.

The site writes that:

“The Arkansas diamond mine at Crater of Diamonds State Park… is located near Murfreesboro… For a fee of a few dollars, you can enter the mine, search all day, and keep any diamonds that you find. In addition to diamonds, you might find one of the many colorful gemstones that occur naturally there.”

“The diamonds at the Park occur in the soil, and that makes them easy to look for. Some people find them after it rains by walking through the field looking for the bright reflection of a diamond that has been washed clean by the rain. Other people dig in the soil and carefully search through it one shovel-full at a time.

“You can bring your own tools or rent tools at the Park. Power tools are not allowed; however, the Park periodically plows the diamond field to turn up fresh soil.

“Searching is easy but you will need a combination of luck, patience, and a very sharp eye to find a diamond.”

And “everyone has fun” regardless, it assures.

The Arkansas State Parks site itself adds this:

“More than 33,100 diamonds have been found by park visitors since the Crater of Diamonds became an Arkansas state park in 1972. Notable diamonds found… include the 40.23-carat Uncle Sam, the largest diamond ever unearthed in the U.S.; the 16.37-carat Amarillo Starlight; the 15.33-carat Star of Arkansas; and the 8.52-carat Esperanza.”

But Geology.com does warn that merely “a few miners have been extremely successful.”

Increase Your Chances of Seeing Something Sparkle

That dream-dampening caution is only to be expected. If it was easy to find jewels there, the mine would no doubt be commercially owned and operated.

Now, apparently the park does give you the opportunity to learn “about diamonds and how to search for them.” So I suppose that’s a start, bringing your chances up from practically nothing to a little more than practically nothing.

But if you really want to increase your chances of finding a diamond, I imagine you want to bring an expert along with you. Someone who will bring the knowledge and equipment necessary to not waste time on somewhat look-alike rocks like quartz… and find something exquisite instead.

The same goes for small-cap stocks.

There are acres and acres worth of common “stones” available out there. Some of them are obviously not worth picking up. Some are kind of intriguing, and some look like they could make you a mint.

But will they? Or will they disappoint?

There might not be a 4-C checklist (i.e., cut, color, carat, and clarity) when it comes to picking the best small caps. But when you do know what to search for, I think you’ll find they make much better investments with much better returns.

That’s certainly what I’m seeing with the following two small-cap REITs I consider to be Strong Buys.

A Little Rough, but We’re Liking GMRE’s Cut So Far

Formed in 2011, Global Medical REIT (GMRE) is primarily engaged in acquiring purpose-built healthcare facilities. It then leases them to strong healthcare systems and physician groups with leading market share.

It offers mostly single-tenant buildings with long-term contractual leases that carry a current weighted average term of 7.8 years. Specifically, GMRE focuses on clients that deliver core procedures, such as:

GMRE’s market cap is around $677 million, and a $1.06 billion portfolio comprised of 122 buildings and 103 tenants. Incidentally, that portfolio publicly began at just $93 million, which represents 75% annual growth.

Even this year, it’s completed 12 acquisitions to date that encompass 760,081 leasable square feet. Those purchases totaled $171.2 million, with annualized base rent of $13.6 million at a weighted average cap rate of 8%.

GMRE’s property sub-sectors are comprised of:

GMRE is too small for agency rating. Yet it keeps expanding access to multiple sources of capital anyway to fund further acquisitions. Its total liquidity is approximately $144 million, with a 3.34% weighted average interest rate and a 3.1-year weighted average term of debt.

At first glance, you may think it’s soundly valued. Shares trade at 15.7 p/AFFO versus a norm of around 15x. 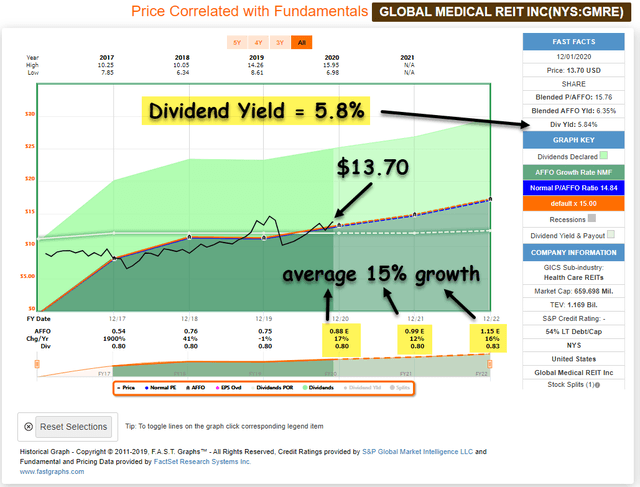 2020 is the first year GMRE has fully covered its dividend from AFFO. And when you consider internalization and the potential for massive earnings growth, we’ve opted to upgrade this little gem to a Strong Buy. 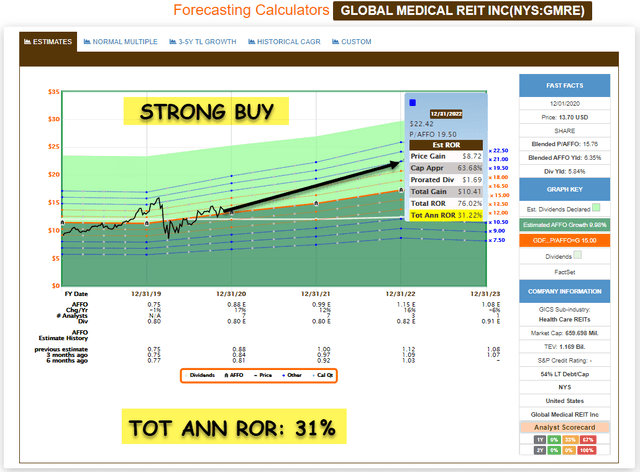 A Little Dented but Still a Lot of Market Value

Our next small-cap gem is City Office (CIO), an interesting play in the “rush to suburbia” category.

Many gateway market REITs continue to struggle in this anti-city environment. But CIO remains attractive anyway.

Its 65 office buildings total about 5.8 million square feet of net rentable area in and around Dallas, Denver, Orlando, Phoenix, Portland, San Diego, Seattle, and Tampa. The company targets these “18-hour cities” for their:

Since 2014, CIO has acquired over $1.5 billion in total assets to achieve 281% growth. It now owns 5.8 million square feet worth of rentable space.

I frequently compare it to STAG Industrial (STAG), which steers away from its own bigger peers in the industrial sector. Essentially, CIO focuses on properties valued at between $25 million and $100 million.

That’s smart since those markets have less competition from larger institutional players.

At the end of Q3-20, the company had cash and restricted cash of around $56 million. Its net debt (including restricted cash) to earnings before interest, taxes, depreciation, and amortization (EBITDA) was 6.4x.

Its total debt had a 4.5-year weighted average maturity. And 89% of that was effectively fixed with no debt maturities in 2020 and just one next May. 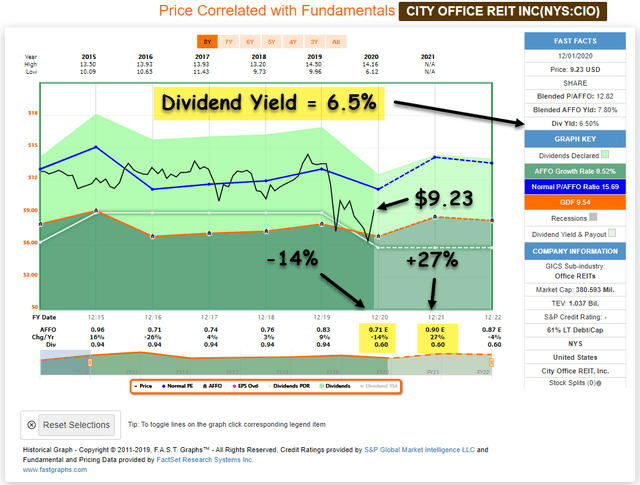 Since those levels exceed its original pre COVID-19 guidance, that’s one more reason to maintain a Strong Buy. 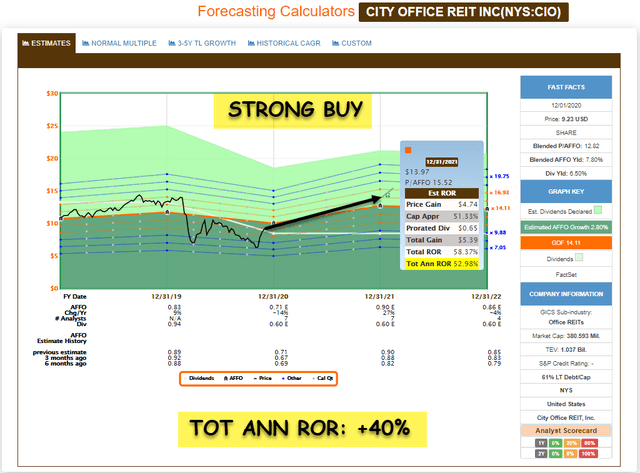 Our Small-Cap REIT portfolio has returned over 32% annually since January 2016. We attribute that success to the meticulous screening of such undervalued shares.

It goes without saying that small-cap stocks are more volatile. So it can take more fortitude and research for us to achieve such results.

Given the limited number of quality small-cap REIT offerings, we must be careful not to make any bad bets.

With that said, our screening process here is consistent with our dedication to analyze all REITs within our coverage spectrum. And the time and effort spent is well worth it.

As I said earlier:

“There might not be a 4-C checklist (i.e., cut, color, carat, and clarity) when it comes to picking the best small-caps out. But when you do know what to look for, I think you’ll find they make much better investments with much better returns.”

At iREIT on Alpha, we’re committed to helping investors navigate the turbulent times. We carefully lay out framework for finding great REITs and show you how to know when they’re trading at a discount to intrinsic value. Our quality scoring tool helps identify the company’s economic moat and generate stellar portfolio returns. 20% Off and FREE REIT Book. 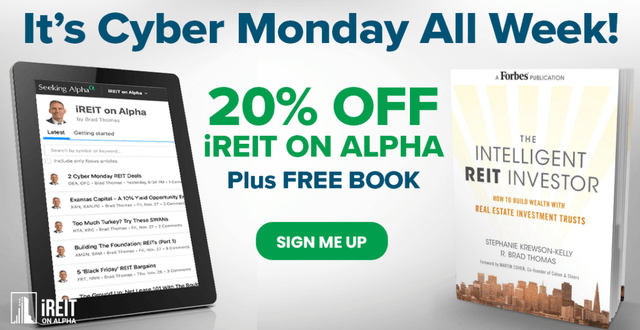 Disclosure: I am/we are long GMRE, CIO. I wrote this article myself, and it expresses my own opinions. I am not receiving compensation for it (other than from Seeking Alpha). I have no business relationship with any company whose stock is mentioned in this article.