Mini Trade Deal Could Be Huge Catalyst For Oil

U.S. West Texas Intermediate futures are in a position to close higher for the week although trading inside last week’s range still suggests investor uncertainty and indecision. Furthermore, the price action appears to be representative of short-covering as opposed to aggressive counter-trend buying. This is understandable considering the fundamentals remain overwhelmingly bearish despite a slight shift in the narrative due to optimism over a possible trade deal between the United States and China.

Crude oil prices are moving higher on the last day of the week as traders grew more optimistic over the possibility of a limited trade deal between the United States and China.

Keep in mind that the entire move is based on speculation after President Donald Trump told reporters on Thursday that talks between the two economic powerhouses were going “really well.” His remarks came after he tweeted that he would meet with Chinese Vice Premier Liu He at the White House on Friday.

Traders have been growing more optimistic throughout the session on Friday, but just enough to fuel a short-covering rally. Other than speculative buying, there still isn’t any evidence that investors have flipped sentiment from bearish to bullish.

Driving the optimism at the end of the week are a series of moves by the United States and China that suggest progress is being made at the meeting. These moves include China’s lifting of a requirement that foreign financial companies have a Chinese investor and China’s agreement to buy more U.S. goods. The New York Times also reported the two sides could announce a deal that would avoid raising tariffs on Chinese goods.

The muted move in crude oil is probably because all existing tariffs are expected to remain in place. Furthermore, crude traders realize that until there is a deal that ends existing tariffs, demand will remain bearish especially in light of the ongoing weakness in the global growth outlook.

Earlier in the week, crude oil prices were pressured after OPEC trimmed its forecast for oil demand growth for the third month in a row, citing weaker-than-expected data in the Asia Pacific region as well as advanced economies in the Americas.

In its closely-watched monthly report, OPEC cut its forecast for global oil demand growth for the remainder of this year to 0.98 million barrels per day (b/d). That’s down from its September estimate.

At the same time it was announcing its forecast for lower demand, OPEC said it was considering deeper oil output cuts ahead of their December meeting.

“All options are open,” he said.

This news triggered the biggest and best response by crude oil traders, driving prices up 1.3%. Traders probably realized they don’t have much control over demand since a U.S.-China trade deal is out of OPEC’s hands. However, if OPEC is willing to cut once to meet demand, then they’ll be more willing to cut again in the future if the trade war continues well into 2020.

The EIA reported that U.S. crude supplies climbed for a fourth week in a row, by 2.9 million barrels for the week-ended October 4. Traders were looking for a 2.4 million barrel build.

This week’s report fueled a mild sell-off that was easily offset by the news that OPEC was consider further production cuts. 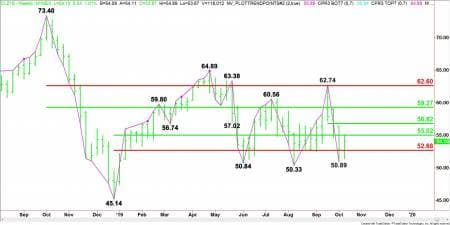 The main trend is up according to the weekly swing chart. However, momentum is trending lower. The main trend will change to down when sellers take out the swing bottom at $50.33. A move through $62.74 will signal a resumption of the uptrend.

Based on this week’s price action, the direction of the December WTI crude oil chart next week is likely to be determined by trader reaction to the minor 50% level at $55.02.

Overtaking $55.20 will indicate the presence of buyers. This could trigger a rally into the pivot at $56.82. This level is a potential trigger point for an acceleration to the upside with the next target zone coming in at $59.27 to $62.60.

A sustained move under $55.02 will signal the presence of sellers. This could lead to a retest of $52.68 and $50.89. Taking out $50.33 will change the main trend to down. This could trigger an acceleration to the downside.

The announcement of a partial or full trade deal will be potentially bullish for crude oil. The first rally will drive out the shorts. However, I don’t think we’re going to see a huge increase in long positions initially, due to the demand concerns. However, if the global economy starts to improve over the near-term, we’re likely to see additional buying. Furthermore, OPEC is going to have to announce further production cuts in December in order to flip traders to the bullish side. This could fuel the start of a longer-term rally.