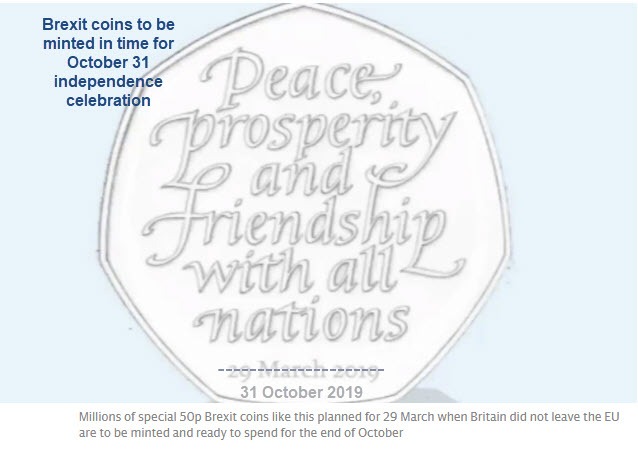 The Telegraph reports Millions of Brexit 50p Coins to be Minted in Time for October 31.

Millions of special 50p Brexit coins are to be minted and ready to spend in time to mark Britain’s exit from the European Union, under plans being drawn up by the Chancellor.

Sajid Javid, who is also Master of the Mint, has asked officials to look at whether the seven-sided coins can be produced in huge volumes in time for exit day on October 31.

The decision will be seen as a statement of intent that the Treasury is fully behind Brexit now that its predecessor Philip Hammond, who was mistrusted by Brexiteers for his gloomy prognosis on leaving the EU, has returned to the backbenches.

The Royal Mint regularly issues special coins to mark national moments notably a new set of coins which celebrate the London 2012 Olympics, including one that explained football’s offside rule.

A 50p coin was minted when the UK joined the European Economic Community in 1973 and when the UK held the presidency of the EU in 1998.

Chancellor Javid wants the coins to be ready and in circulation by October 31.

Tory MP Craig Mackinlay who first raised the idea with the Treasury last year said: “This is a time for national celebration that our independence and new global freedom is with us. Great news and a clear, positive indication of intent from the Prime Minister and his new government.”

I propose “Free at Last” would be far more fitting than “Peace, Prosperity, and Friendship for all Nations” especially in light of the piss poor way the EU attempted to screw the UK.

Those who disagree need to watch my video Let’s Discuss Brexit (and How the EU Bragged, on Film, About Screwing the UK)

However, a sense of optimism might win more votes.