On the back of the best week for oil prices in recorded history, midstream traded up and outperformed the S&P 500 and utilities. MLPs (AMZ) outperformed broader midstream (AMNA) this week after trailing last week and last month and last year. 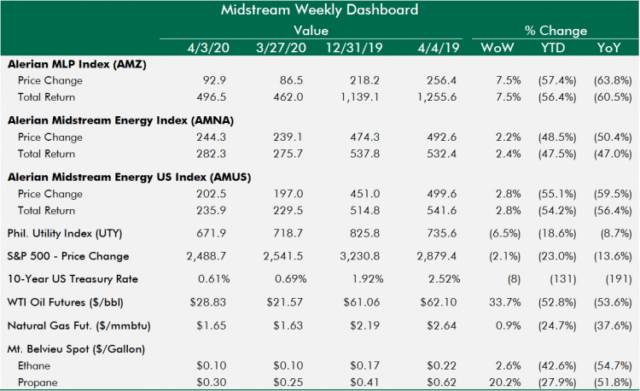 Oil prices spiked on enthusiasm over a tweet from President Trump about some alleged phone calls and negotiations he was engaging with to support prices for the U.S. energy sector. Executives from many large energy companies, including ET, were on hand for a meeting with the President Friday.

After the market closed Friday, President Trump seemed to walk back some of his statements from earlier in the week. It remains a very fluid situation, but you can expect volatility in oil prices again next week as members of OPEC and Russia engage in further discussions, presumably on a Zoom call.

We would expect MLPs to lag in an oil price recovery, like they did this week, because an oil price recovery is likely to be the result of lower production in the U.S., either through short-term curtailment measures or through long-term economic forces. Lower production will mean lower volume through energy infrastructure assets that were already expected to be overbuilt in key growth areas.

Having said that, there has been a sharp bounce off the bottom for midstream since oil turned around, and midstream has outperformed in the very short term off the lows (as shown in the chart below). 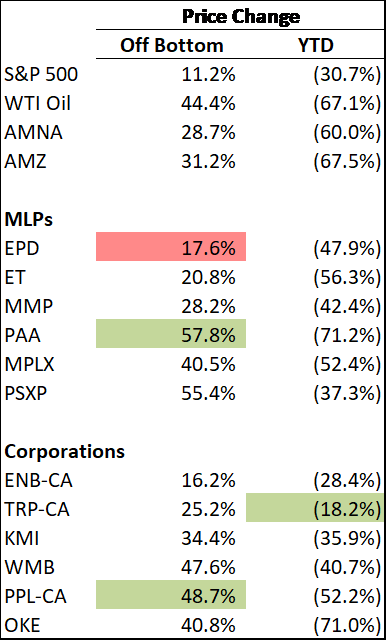 The bottom may be in, but as with every recovery, once things bounce off the absolute depths, performance is tougher. Unlike in 2015 and 2016, the broad market has sold off, with pockets of the global market (including utilities and other infrastructure stocks) off more than the best-performing midstream companies. Competing for investor capital for a follow through will likely require further positive catalysts like M&A and earnings updates. Those need to outweigh headline risk from reduced production and customer bankruptcies, both of which are coming.

March is finally behind us. But I wanted to quickly debrief on the carnage and just how extreme this latest selloff has been. It was third straight negative month to open the year, the worst three-month stretch for MLPs and midstream stocks ever, and two of the top five worst months on record in a row. This quarter makes three straight negative quarters for the MLP Index. The 57% return YTD would be the worst ever annual return if the year ended today, far worse than 2008’s return of -36% and 2015’s return of -33%. 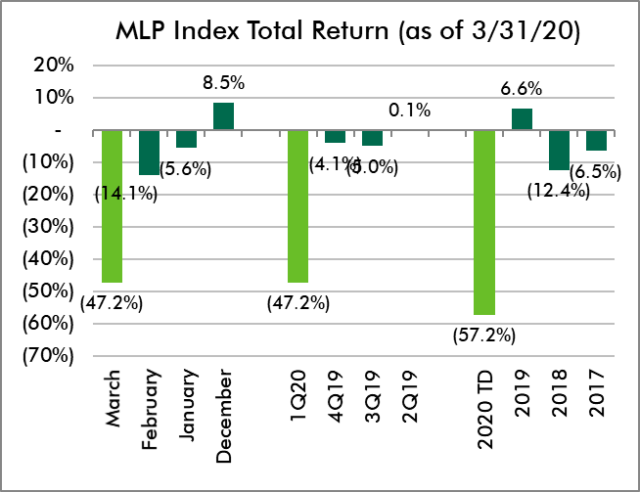 AMNA return wasn’t quite as bad as MLPs on their own, which is an ongoing trend that shows no signs of changing. Midstream corporations in the U.S. and Canada continue to outperform, even if the absolute number is far worse than any prior period for the broader midstream universe as well. 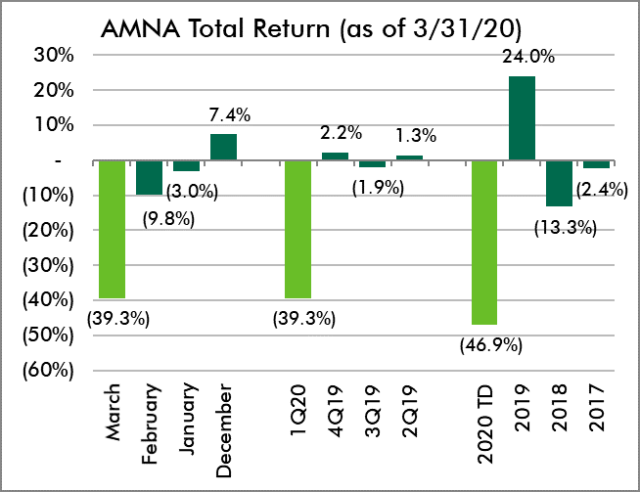 In prior big declines for the sector, the results in the next month have been mixed. The worst month in the last 10 years before March was September 2015, and the sector rallied around 10% the following month. But in 2008, when both September and November were -17% each, both subsequent months were negative for the AMZ. The next 12 months has a better track record for bouncing back, but the average rebound is 20%, which would not replace much of the value lost so far this year. 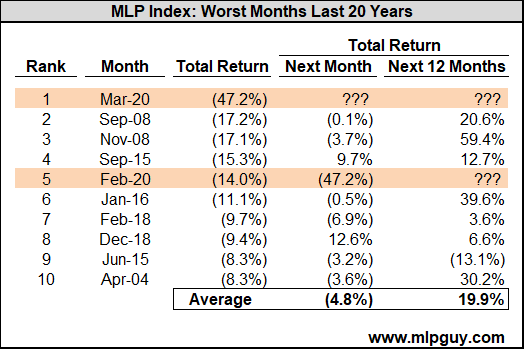 There were some big moves among MLPs in both directions this week. The top 3 were each up 30%+, including three MLPs that cut their distribution this quarter, with ENBL the only one announced this week. GEL was slammed 10% on Friday on the suggestion that Gulf of Mexico production could potentially be shut down in government intervention, otherwise GEL might have led all MLPs this week. 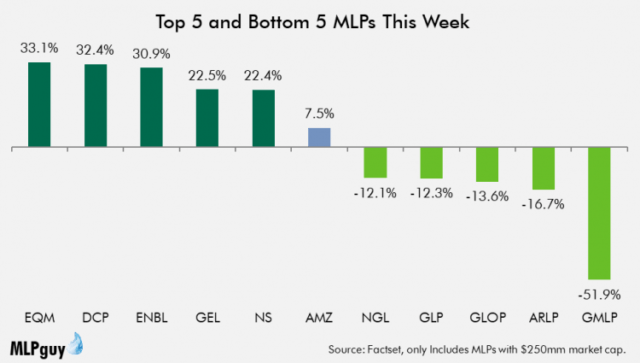 On the downside, only NGL is a member of the MLP Index. GMLP was down 52% and announced a 95% distribution cut this week, which took it from first last week to worst this week. NGL repeated in the bottom 5, GEL went from bottom 5 to top 5.

On the YTD leaderboard, SRLP and EVA are the leaders. TCP and PSXP joined the top 5 this week. DCP and GEL were replaced in the bottom 5 by WES and SMLP this week. 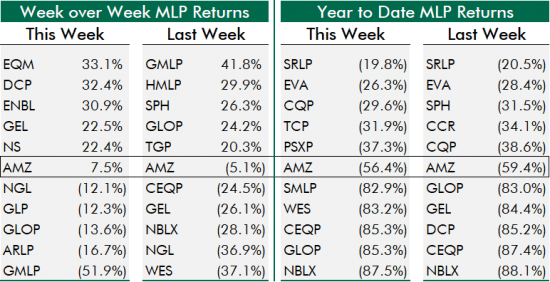 MLP-tethered corp ETRN was the leader in the midstream corporation group this week. MLP Index member HESM was also a huge outperformer in a strong overall week for MLPs relative to midstream corporations. MLP-tethered corporation PAGP did not outperform, and neither did TRGP, despite higher commodity prices. TGE continues to trade at a wide discount to the sweetened deal price with its sponsor that is expected to close this month. 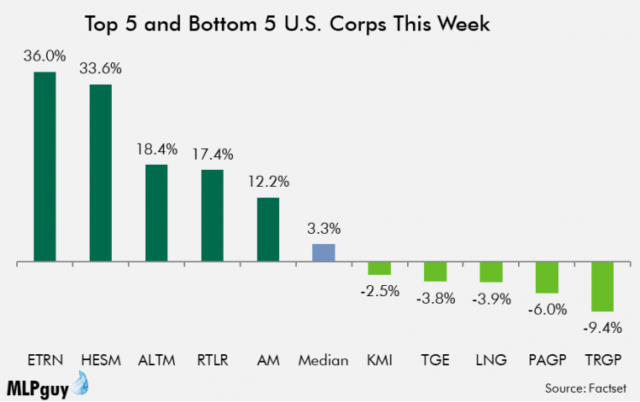 ETRN, ALTM, RTLR and HESM went from bottom 5 last week to top 5 this week. KMI underperformed after wide outperformance last week. On the YTD leaderboard, only two stocks in this group are down less than 40% and one of those has a cash agreement to sell. 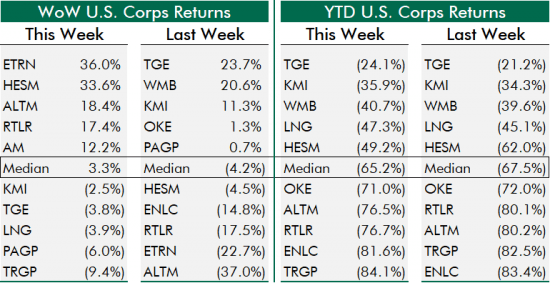 TRP captured some enthusiasm after announcing Alberta’s equity investment and support of its Keystone XL pipeline project, although there are a lot of potential challenges to getting the pipeline complete by 2023 in-service date. KEY and GEI were the biggest winners in this group, while IPL gave back some of its gains from last week, after it became the first Canadian midstream corporation to cut its dividend in more than 10 years. 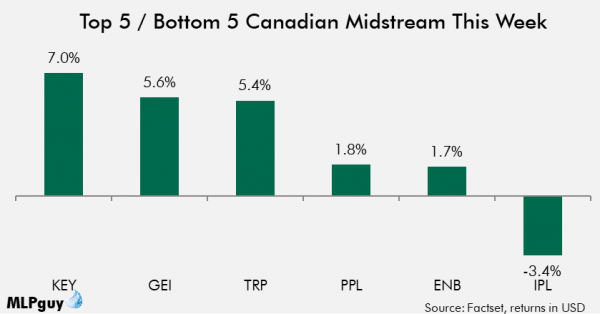 Keyera (OTC:KEYUF) went from worst to first week-over-week. TRP was near the top of the group again, and remains the best performing midstream stock in the universe, down less than 20% in USD terms so far this year. ENB has held up remarkably well also, but things blow out beyond that.

READ ALSO  All Of The World's Money & Markets In One Visualization

The big news this week was the FID of the Keystone XL that has been in development since before the Global Financial Crisis, with a push from the Alberta government. We also had the 8th and 9th distribution cuts of the quarter this week from ENBL and GMLP, but ET maintained its distribution, which was newsworthy given its 26% yield at the time (ended the week at 23%). Also, Lake Charles LNG lost its partner, a partner who is one of the biggest LNG players globally, which is a setback.