Midstream At The Midpoint: Where We’ve Been And What’s Next

For midstream investors, 2020 has undoubtedly been a roller coaster. Despite the downturn in both energy and broader markets in the first quarter, midstream has rallied significantly in the last few months off the all-time lows seen in mid-March. Today’s research note provides a broad update on where midstream stands approaching the halfway point of this year in terms of leverage, yields, and distribution coverage. It also discusses the factors that could determine whether the current recovery continues or potentially pauses.

After a tepid start to the year, energy performance turned down sharply in March as a result of simultaneous supply and demand shocks in oil markets. Saudi Arabia and Russia became entangled in an oil price war in early March. At the same time, oil demand began to nosedive as travel and global economic activity slowed significantly in the wake of mandatory lockdowns designed to stem the spread of COVID-19. From December 31 to midstream’s low on March 18, the Alerian MLP Infrastructure Index (AMZI) decreased 67.4%, while the Alerian Midstream Energy Select Index (AMEI) fell 61.9% on a price-return basis (see table below). No sector of energy was spared as West Texas Intermediate (WTI) crude prices fell 66.6% in conjunction with a significant drop in broader markets.

Since March, there has been a marked improvement in energy equities, including midstream. OPEC and its allies agreed to a deal in April to substantially curb oil output beginning in May and extended those cuts last week. After bottoming in April and the front-month contract briefly trading negative, oil prices saw a swift recovery, with WTI crude prices nearing $40 per barrel earlier this week. Year-to-date through June 8, MLPs, represented by the AMZI, are down 24.8%, while broader midstream represented by the AMEI has decreased 19.5% on a price-return basis. The recovery in energy has been multifaceted against the backdrop of an improving fundamental outlook for oil. For midstream in particular, constructive company updates before and during 1Q20 earnings season and resilient distributions from larger names have likely supported performance. With the Federal Funds rate cut to zero in March, investors may also be attracted to midstream for income, which remains attractive despite recent distribution cuts. As of June 5, the AMZI was yielding 9.5%, off its high of 25.3% on March 18 but above its trailing three-year average of 8.6%. Similarly, the AMEI was yielding 7.1%, down from a high of 15.2% on March 18 but above the index’s three-year average of 6.4%.

Midstream is positioning itself to weather macro headwinds.

Midstream companies entered 2020 in a better position financially to withstand macro volatility, and companies have taken further steps in recent months to improve positioning. Although the majority of constituents of both the AMZI and AMEI Indexes by weighting maintained or grew their dividends, dividend cuts were common for 1Q20 as companies sought to enhance financial flexibility and preserve liquidity (read more). Larger companies in the space were better able to defend their distributions. Among the top ten names in the AMZI (77.3% weighting as of June 1) and AMEI (66.4% weighting as of June 1), there were three cuts in the AMZI and one in the AMEI. One way to gauge the potential for further cuts is with distribution coverage, which measures the ability of MLPs to afford their distributions and represents the cushion between distributable cash flow being generated and cash being paid out as distributions to unitholders. As a result of recent cuts, distribution coverage increased on average for 1Q20 to 2.6x for the MLPs of the AMZI, which compares to 1.5x for 4Q19 and 1Q19 (see table below). Clearly, the 1Q20 data is being skewed higher by recent distribution revisions. The silver lining of distribution cuts is in their boost to retained cash flow, which can be used to enhance balance sheets and liquidity. For the MLPs that did not reduce their distributions for 1Q20, coverage has remained manageable or better relative to history, with some names seeing only small decreases compared to the same period last year. While companies that maintained payouts or already cut could reduce their payouts in the future, many appear to have an adequate buffer between cash flows generated and distributions paid, contributing to a more sustainable yield for the index overall. 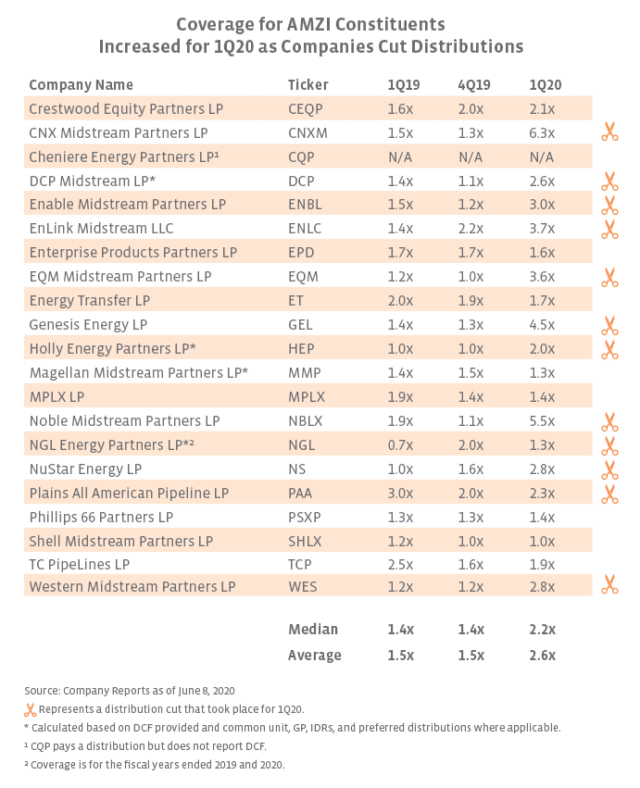 Relative to their positioning in the oil downturn of 2014-16, many AMZI and AMEI constituents have managed leverage at more conservative levels. In the table below, the leverage ratio is defined as long-term debt divided by adjusted EBITDA. While leverage is admittedly best viewed in the context of each individual company, the space overall saw leverage remain relatively flat for 1Q20 compared to the end of 2019. Leverage ratios increased slightly for some companies, including ONEOK (NYSE:OKE), which maintained its dividend for 1Q20 and announced an equity offering Thursday morning. OKE expects to use the proceeds for general corporate purposes, which could include paying down debt and funding capex. Many of the midstream companies with above-average leverage were among those who lowered their payouts in recent months and will likely redirect cash to reducing leverage. 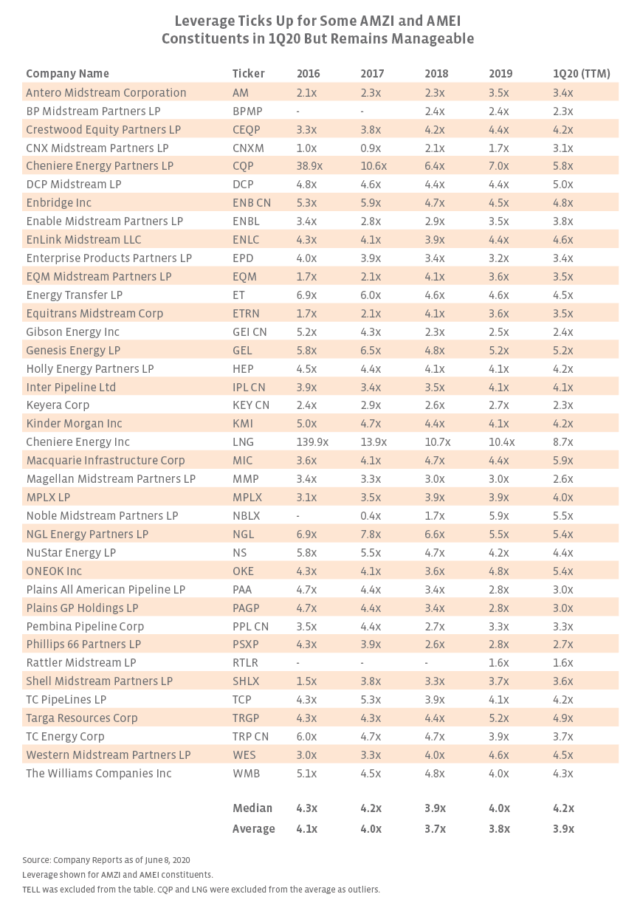 Companies have also taken substantial steps to reduce growth capital spending in response to slowing producer activity. The space was already expected to moderate capital expenditures coming into this year, but the changing outlook for US oil and natural gas production growth has accelerated this trend (read more). For the AMZI, the average percent reduction in 2020 spending from each MLP’s initial guidance to current guidance is -24.1%, while the constituents of the AMEI expect to reduce spending by an additional -22.5% over initial guidance for this year. Four constituents – DCP Midstream (NYSE:DCP), MPLX (NYSE:MPLX), Noble Midstream Partners (NASDAQ:NBLX), and Shell Midstream Partners (NYSE:SHLX) – have announced cuts of 50% or greater to initial 2020 budgets. Spending reductions reflect a mix of project deferrals and outright cancellations. The potential for midstream to reach a free cash flow inflection point in 2020-21 was a key theme heading into this year, and reductions in spending (and distribution cuts) may accelerate this trend. With macro headwinds persisting, free cash flow is more likely to be used for enhancing financial flexibility and paying down debt as opposed to increasing distributions or pursuing share buybacks. For example, after a 90% sequential cut to its dividend for 1Q20, Targa Resources (NYSE:TRGP) expects to generate significant free cash flow to reduce debt levels. MPLX, which maintained its distribution, reiterated its expectation to be free cash flow positive after distributions in 2021 through earnings growth and high-grading its growth capex. Free cash flow generation is an important step in the evolution of the midstream financial model and eventually the pursuit of shareholder-friendly actions in more stable markets.

Can the midstream rally continue?

With midstream and MLPs improving significantly off their lows but still down around 20% year-to-date, investors are reasonably wondering whether this rally can continue. From a macro perspective, the worst seems to be behind oil markets given recovering demand and cooperation on supply cuts. In the US, E&Ps that shut in production are starting to restore volumes in response to higher oil prices, which bodes well for midstream. For example, in an 8-K filing from June 3, WPX Energy (NYSE:WPX) indicated that it had begun bringing shut-in volumes back online after shutting in 30,000 barrels per day net last month. While tides are turning, the production outlook remains uncertain, and some midstream assets may be underutilized in the near term with the financial impact depending on contract protections like minimum volume commitments. More broadly, supply returning too quickly in the US or overseas could threaten the oil recovery as demand remains fragile. Midstream should be more insulated to oil moves given the fee-based nature of cash flows and could garner more interest if oil volatility weighs on other energy sectors, but oil prices may continue to impact investor sentiment even for midstream.

Setting aside oil prices and the outlook for production, there are other midstream-specific items to consider. With many names already cutting their payouts, the income from midstream companies may be considered more reliable today, and yields remain attractive in the current environment of low interest rates. A perception of less downside risk in distributions could bring greater interest to midstream. Additionally, investors looking to maintain some exposure to an oil recovery but wanting more defensive energy exposure in case oil prices pull back may increasingly turn to midstream. On the other hand, counterparty risk remains an ongoing concern as some E&Ps face financial distress, though most midstream companies are exposed to a diverse customer base or high-quality, non-producer customers. While still several weeks out, there is also uncertainty surrounding 2Q20 earnings, which midstream will begin reporting in earnest in late July. Results for 2Q20 will capture the bulk of COVID-19 impacts occurring during April and May. If the macro environment continues to improve, investors may give companies a free pass on 2Q20 results. Resilient 2Q20 results could even act as a catalyst in reinforcing the strength of midstream’s fee-based business model. On the other hand, any negative surprises could be punished. While oil prices and broader market sentiment are likely to factor into midstream performance in coming weeks, midstream has taken steps to improve its financial footing to weather macro headwinds.

Midstream equities have recovered significantly off of their March lows with constructive company updates and steady distributions from large names reinforcing the advantages of midstream’s fee-based business model. Companies have responded prudently to market headwinds by prioritizing financial flexibility, resulting in dividend cuts for multiple names with a view to reducing leverage. Though macro uncertainty persists, midstream continues to offer compelling income opportunities while working on other improvements, namely reducing leverage and moving toward free cash flow generation. There appears to be reason for cautious optimism for a continued midstream recovery, even if some risks to the outlook remain.

Disclosure: ©Alerian 2020. All rights reserved. This material is reproduced with the prior consent of Alerian. It is provided as general information only and should not be taken as investment advice. Employees of Alerian are prohibited from owning individual MLPs. For more information on Alerian and to see our full disclaimer, visit http://www.alerian.com/disclaimers.