Microsoft First Look: A Beast Of A Quarter (NASDAQ:MSFT)

“Two years’ worth of digital transformation in two months”.

The quote, published on Microsoft’s (NASDAQ:MSFT) fiscal 3Q20 earnings report, helps to explain the impressive result delivered by the Redmond, Washington-based tech company on April 29, after the closing bell.

Revenues of $35.0 billion zipped past consensus estimate of $33.7 billion, increasing by an impressive rate of 14.4% YOY, which was the highest seen since 2018. The 13-cent EPS beat was in line with what Microsoft had become accustomed to delivering in the past 10 quarters or so. 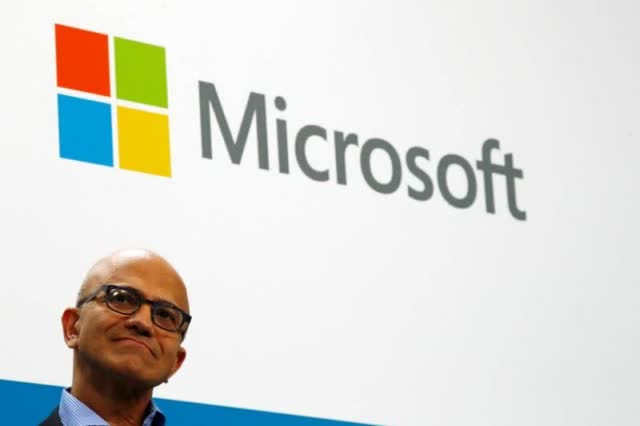 In my earnings preview article, I argued that Microsoft could perform substantially better than the rest of Corporate America in the first calendar quarter of the year. In my view, the company was set to benefit from tailwinds in office productivity, a robust and fairly stable subscription-based business model, and a revival in gaming. As it turns out, my optimism was not only justified, but also in fact understated.

Microsoft saw strength across its segments, from white-hot cloud infrastructure to a personal computing business that I assumed would suffer much more from a sharp decline in PC shipments in the first few months of 2020. The numbers would have been even better, if not for about one percentage point of unfavorable currency movements.

Productivity and business processes seem to have capitalized on the increase in remote work and higher demand for collaboration services (e.g. streaming) during the COVID-19 crisis. Very much in line with my projections, the soft spot was the licensing business, particularly on the commercial side, probably due to budget trims within the small-to-medium size enterprise vertical – in addition to the secular license-to-cloud migration. Office commercial sales, for example, were down a whopping 20% in constant-currency terms.

In cloud infrastructure, my mild concerns over reduced demand due to lower capex budgets seem to have been put to rest. Azure revenues continued to march forward at a dizzying pace of 61% ex-FX, barely showing any sign of meaningful growth deceleration. Even slower-growing server products had one of the best quarters in recent memory. 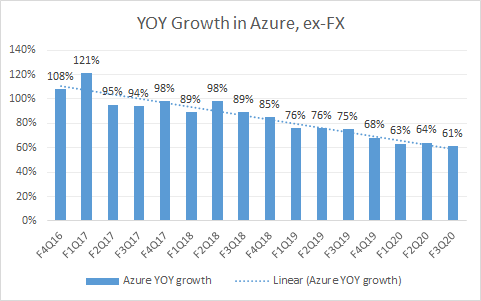 Perhaps the biggest surprise of fiscal 3Q20 was personal computing. After having backed out of its original top-line guidance for the segment, Microsoft delivered sales that topped expectations by over half a billion dollars, accounting for roughly half of the total company’s revenue beat.

A weak PC market does not seem to have impacted Microsoft’s Windows OEM business, whose revenues ended the quarter flat YOY. On the other hand, I admit that gaming and Xbox numbers did not quite impress me. I don’t think, however, that analysts and investors will scrutinize this corner of the personal computing segment much, considering how the rest of the company performed in the quarter.

Get used to “perma-rich” valuations

Just like that, after climbing 8% in the past 24 hours, MSFT is within striking distance of its all-time highs. While some may have a hard time reconciling the upward movement in share price with a health and economic crisis of epic proportions, I believe MSFT deserves to trade at current levels. Under the leadership of Satya Nadella, the company continues to execute as well as it has in the past several years, turning risks and threats into opportunities and delivering enviable financial results.

READ ALSO  American Airlines: Hope Is Not A Strategy (NASDAQ:AAL)

Sure, valuations look very rich. Trailing P/E of 32.3x, a number that will likely climb during the Thursday trading session, is about as high as the multiple has been in the past 52 weeks (see chart above). But MSFT has not traded at low valuation levels in years, other than during a very brief period that ended in mid-March and that most investors would have missed if they blinked.

Due to a combination of factors that include Microsoft’s execution, trends in cloud adoption and slow transition to a subscription-based business model, I continue to find this stock a good addition to a diversified portfolio.

Disclosure: I am/we are long MSFT. I wrote this article myself, and it expresses my own opinions. I am not receiving compensation for it (other than from Seeking Alpha). I have no business relationship with any company whose stock is mentioned in this article.