Earlier this year, Katrina Foley, the mayor of Costa Mesa, California, imagined that the controversial opening of a new homeless shelter would be the event that consumed most of her time.

Then coronavirus arrived and the shelter issue suddenly looked puny compared with the challenges that have since come the mayor’s way. The federal government wanted passengers from a quarantine-stranded cruise ship to stay at a facility in Costa Mesa, prompting an uproar from fearful residents; the shopping centre that supplies a third of the city’s budget was shut down, necessitating $40m in spending cuts; seniors were isolated by social distancing; and some citizens objected to wearing masks. Now comes the challenge of trying to reopen schools.

“This has been all-consuming,” said Ms Foley, a Democrat.

For help, she has joined a regular online gathering sponsored by Michael Bloomberg and Harvard’s Kennedy School of Government that is trying to give mayors tools to guide their communities through a pandemic.

The programme is part crash-course in crisis management — in the technocratic style of Mr Bloomberg — and part group therapy for hundreds of mayors from around the world struggling with a public health crisis that has spawned an economic calamity.

“It’s been invaluable,” Ms Foley said. “I don’t know that I could have gotten through the early phase of the pandemic with as much confidence about what I was doing if I wasn’t participating in that programme.”

Unlike other elected officials, you don’t have the luxury of playing politics during a pandemic

The lessons are taking place as Democrats count on Mr Bloomberg, who first ran for mayor of New York as a Republican, to tap into his estimated $55bn fortune in the effort to defeat President Donald Trump. Mr Bloomberg is taking a strategic approach that is likely to shift as the presidential race unfolds, according to aides, rather than offering a blank cheque.

Last week, for example, he pledged $60m to support the party’s congressional candidates in the same sort of suburban swing districts where his investments in the 2018 midterm elections helped the Democrats recapture the House of Representatives. Mr Bloomberg has also spent $35m on Hawkfish, a bespoke data analytics system, in the hope of closing the gap with Republicans in that discipline.

In a prime speaking slot at the Democratic National Convention on Thursday, just before Joe Biden, the self-made businessman asked: “Why the hell would we hire Donald Trump for another four years?”

A less noticed contribution may be Mr Bloomberg’s training of mayors, guided by his belief in the importance of local government. It began three years ago, with the launch of a year-long programme, in partnership with Harvard, to school mayors in the data-heavy approach that Mr Bloomberg and his acolytes relied on when they governed New York City.

The Bloomberg Harvard City Leadership Initiative features a three-day meeting in New York each July for a class of 40 or so mayors, hosted by Mr Bloomberg, and then remote seminars over the course of the year with Harvard professors and other experts. Past attendees include Pete Buttigieg, then mayor of South Bend, Indiana, and Laurie Lightfoot, mayor of Chicago.

Mr Bloomberg’s political ambitions initially invited suspicions that the mayoral outreach might be a means to cultivate a national political network. That seems less relevant since Mr Bloomberg, 78, dropped out of the Democratic primary in early March.

It was around that time that Covid-19 cases were beginning to spiral in the US. Mr Bloomberg decided to create a separate online programme where mayors from cities big and small could convene each week to address the pandemic.

“Unlike other elected officials, you don’t have the luxury of playing politics during a pandemic,” Mr Bloomberg told the mayors during a session last Thursday. 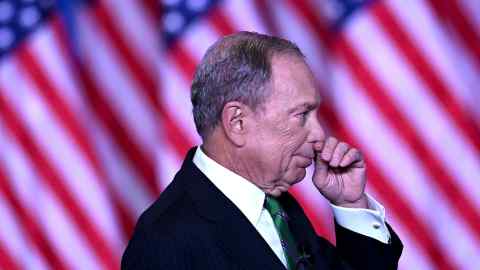 Mr Bloomberg tends to keep his remarks brief — often attempting a joke with the flair that may remind some why his campaign flamed out — and then handing over to a guest speaker to deliver a pep talk. Recent invitees include Barack Obama, Bill Gates, George W Bush and Colin Powell.

Last week’s guest, Susan Rice, the former UN ambassador, tried to reassure mayors juggling so many overlapping crises. “There are going to be some balls that drop and crash to the ground,” Ms Rice said.

Then come experts from institutions such as the Centers for Disease Control and Prevention or the Johns Hopkins Bloomberg School of Public Health, who provide updates on the pandemic’s spread, potential vaccines, the risks to children and related topics.

Ms Foley found that especially useful in the early days. She had never heard of coronavirus, and messages provided by federal and state officials were often contradictory. “It helped guide us and give us a road map of how we could respond,” she said, noting that Costa Mesa ended up being one of the early cities in California to require citizens to wear masks.

Kathy Sheehan, the mayor of Albany, New York, said local leaders were adept at dealing with snowstorms, power outages and other crises for which they have well-honed protocols.

The benefit of the Bloomberg programme, she said, was that it offered a framework to begin to make sense of an event without any clear beginning, middle or end. One Harvard professor spoke of “the volcano of issues” thrown up by coronavirus.

READ ALSO  You Thought We Had A Polarized Society Before COVID?

“It certainly helped me during some of the dark times,” said Ms Sheehan, who regularly trades texts with fellow mayors.

“In the throes of it, we didn’t know what to tell people, didn’t know how people would respond to the restrictions put in place, whether they would understand them,” she said. “The Bloomberg sessions really helped to say: You’ve got to think about all these different impacted sectors and individuals. You’ve got to break it down.”