Mexican president Andrés Manuel López Obrador has called on two of his predecessors to testify about alleged corruption during their administrations after a witness linked them to illicit schemes.

Prosecutors say Emilio Lozoya, the former head of the state oil company Pemex, told them millions of dollars of bribes were paid by the Brazilian construction giant Odebrecht to help the 2012 election campaign of former president Enrique Peña Nieto.

Mr Lozoya, who was extradited from Spain to face corruption charges, has also alleged corruption under the 2006-12 conservative government of Felipe Calderón. He testified that it sold feedstock to a petrochemical plant at a big loss in another illegal scheme involving bribery, attorney-general Alejandro Gertz Manero said.

In a move unprecedented in a country with a long history of shielding its top leaders from prosecution, Mr López Obrador said both his predecessors ought to answer the allegations.

“The attorney-general has disclosed that two ex-presidents are involved in possible acts of corruption, also public servants, legislators,” said the leftwing leader at his morning news conference. “So what comes next is that they should be called to give evidence and Mr Lozoya should present proof.”

While it’s essential that endemic corruption be confronted, this is manna from heaven for López Obrador as a distraction from the pandemic and the state of the economy

Mr Calderón has not commented directly on the allegations but has accused Mr López Obrador of a waging a campaign of political persecution against him. Mr Peña Nieto, who is believed to be living in Spain, has not spoken publicly. Odebrecht admitted to having paid $10.5m in bribes to unnamed Mexican officials as part of a multibillion-dollar settlement with prosecutors in 2016.

READ ALSO  Dershowitz: Why I Am Suing CNN

A populist who has vowed to demolish what he terms the “neoliberal” agenda of free-market policies over the past four decades in Mexico, Mr López Obrador has vowed to usher it a historic “fourth transformation” of his country to empower the poor and stamp out corruption.

Experts said the timing of Mr Lozoya’s extradition from Spain to Mexico and dramatic reports of his testimony were politically convenient for a president who was battling one of the world’s highest coronavirus death tolls and a dire economic recession.

“While it’s essential that endemic corruption be confronted and uprooted, this is manna from heaven for López Obrador as a distraction from the Covid pandemic and the state of the Mexican economy,” said Arturo Sarukhán, a former Mexican ambassador to the US and global fellow at the Woodrow Wilson Center’s Mexico Institute.

Mr Sarukhan also pointed out that prosecutors had yet to provide any evidence. “We still haven’t seen the proof in the pudding. We are getting leaks from what Lozoya is allegedly telling the prosecutors’ office but we don’t have a smoking gun yet.”

Investors and Mexican business leaders have been alarmed by Mr López Obrador’s determination to champion heavily indebted Pemex as the national engine of economic development, and to curtail or even reverse the 2014 opening of Mexico’s energy sector to foreign investment.

In summarising Mr Lozoya’s testimony, Mr Gertz Manero referred specifically to “the buying of votes for the structural reforms in 2013 and 2014”, adding that 120m pesos ($6m) were funnelled to six politicians to help ease the passage of the legislation. 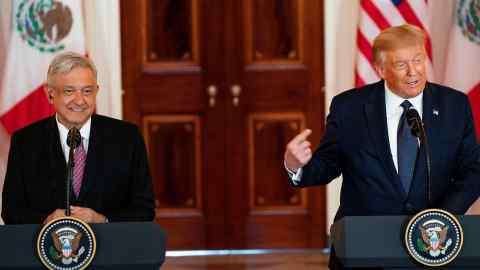 Analysts noted that the revelations came only days after a leaked intergovernmental memo had raised the possibility of a constitutional reform to kill off the opening of the energy sector and restore Pemex’s monopoly.

Andrés Rozental, a former deputy foreign minister and now senior adviser at Chatham House, said “the fundamental strategy now by [López Obrador] and his attorney-general is to make a big show out of all this”.

Since some of the allegations involving top officials were hard to prove, and some related to events that happened before the cut-off under Mexico’s statute of limitations, it was unlikely that any former president would face jail, though some lower-level officials might be imprisoned, Mr Rozental said.

“The more important thing is that this is going to drag on for a long time,” he said. “It will keep going until at least the midterm elections next year.”

Previous PostLyft Reports Lowest EBITDA In HIstory As Revenues Craters 60%Next PostProf: “The Constitution Is Racist”