If there were any lingering doubts about the military might of the Jalisco New Generation Cartel after its brazen attack on Mexico City’s police chief and assassination of a judge, videos widely shared on social media this month have buried them.

“Mr Mencho’s people!” chanted dozens of heavily-armed, fatigues-clad men in one video — referring to the cartel’s leader, Nemesio Oseguera, known as “El Mencho” — as the camera panned down a line of armoured vehicles.

In another video, a balaclava-clad leader was flanked by uniformed men with weapons hoisted, standing in front of machine guns draped with bullets and military-style vehicles.

CJNG, the acronym for the Jalisco New Generation Cartel, in Mexico’s national colours, was emblazoned on their flak jackets. Shields painted on the vehicles’ doors declared them to be the elite special forces group of Mexico’s most aggressive criminal organisation, led by the fugitive Mr Oseguera, whose birthday his soldiers celebrated in the first video.

As President Andrés Manuel López Obrador struggles to contain record nationwide homicide levels and fight organised crime — including putting the military in charge of ports and customs this month, in an effort to halt shipments of chemicals used to make synthetic drugs to CJNG and other cartels — the videos struck a nerve.

Confirmed as authentic by the government, experts said they could be read as a warning — confront the CJNG at your peril — or a bid to rebuild the cartel’s mystique after the failed Mexico City attack.

They resemble [Afghan] warlords — they control territory and authorities. This is very dangerous.

Either way, the evident financial and military firepower underscored the cartel’s menace. While not unprecedented, intelligence and anti-narcotics agents were shocked by their slickness and swagger.

“I’m seeing that the CJNG like none other before has decided to take on the state in toto,” said Eduardo Guerrero, a security consultant. “They are a formidable challenge to the state.”

Under the leadership of Mr Oseguera, the CJNG has gone from upstart to cartel powerhouse. Originally enforcers for the Sinaloa Cartel of jailed drug lord Joaquín “El Chapo” Guzmán, the group was initially known as the “Zeta Killers” after its pursuit of the brutal, now largely extinct Zetas cartel.

It has expanded aggressively into 31 of Mexico’s 32 states, Mr Guerrero said. Operating through a network of cells within a hierarchy headed by Mr Oseguera, it funnels a significant chunk of the drugs consumed into the US over the border, particularly fentanyl and methamphetamines, according to experts and the US Drug Enforcement Administration.

The US has placed a $10m bounty on Mr Oseguera, reportedly a 54-year- old former policeman who served nearly three years in a US prison in the 1990s for distributing heroin, and who founded the CJNG about a decade ago.

But he is rumoured to be suffering from kidney problems and reportedly built his own hospital. According to Mr Guerrero, he could face a nascent challenge to his leadership from two key lieutenants: Juan Carlos González, known as “03”, who the government says founded the elite group last year, and Ricardo Ruiz Velazco, or “Double R”, its leader in the state of Michoacán.

In recent years, the cartel has proved itself to be ruthless and strategic, ambushing security forces, including shooting down a military helicopter in 2015.

Even so, the government was “surprised by the cartel’s demonstration of strength” in the videos, according to Raúl Benítez-Manaut, a professor at Mexico’s UNAM university and expert on security.

He noted that the cartel had suffered a setback when its daring attack last month on Omar García Harfuch, Mexico City’s police chief, failed despite the use of Barret .50 calibre rifles that left his vehicle riddled with bullet holes.

The botched assassination attempt came on the heels of the DEA-led Project Python, which in March led to 600 arrests, 350 indictments and drugs and money seizures in the US. An allied operation, nicknamed Agave Azul, by Mexico’s financial intelligence unit in June, froze 1,939 bank accounts linked to the cartel.

Mr Benítez-Manaut said the message in one video was that the CJNG’s only enemy was the Santa Rosa de Lima cartel in the state of Guanajuato, which focuses on fuel smuggling — possibly signifying an attempt by the CJNG to diversify in order to stay under the DEA’s radar.

“If you control fuel theft, the US government doesn’t pursue you. For the CJNG, it’s very important to have a lucrative business that is not drugs.” 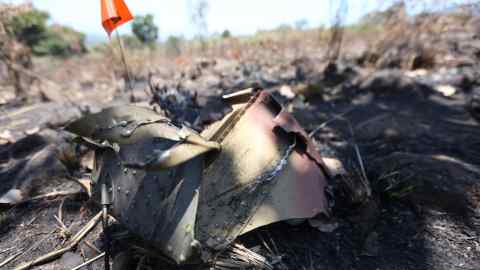 Mr Guerrero saw the videos as a chilling marketing tool by a cartel flush with cash: sowing fear in order to extract extortion payments.

The timing — just after the president visited Guanajuato and Colima, where the CJNG is believed to control the port of Manzanillo — was also seen as significant.

“López Obrador’s visit to Guanajuato just made them signal their defiance to the government,” said one former senior military intelligence officer. “They resemble [Afghan] warlords — they control territory and authorities. This is very dangerous.”

There are also fears that Mr López Obrador’s move to put the ports under military control could backfire if rich cartels bribe low-paid soldiers to look the other way. “The president has the misguided belief that the military is immune to corruption,” said Mr Guerrero. “It’s a fantasy . . . this is a very risky bet.”

The government’s “hugs not bullets” policy and weakened civilian intelligence is also hurting the fight against organised crime, he said. “You have to have a strong mandate from the top to challenge the bad guys. It’s kind of suicidal what’s happening.”