Men as victims of domestic violence: ‘I was paralyzed’

Tami Weissenberg’s story as a victim of abuse began with a familiar male misconception: “I can be her savior!” That was what he thought when he first met the woman who would become his girlfriend.

Tami was deeply moved. He hoped to help her and to prove to her that not all men are the same; that they can be caring and considerate. “The idea that all she said was just one big show designed to win my trust. To instrumentalize me,” Weissenberg recalls, was something that simply didn’t occur to him at the time. It was the beginning of a desperately painful six-year-long relationship. 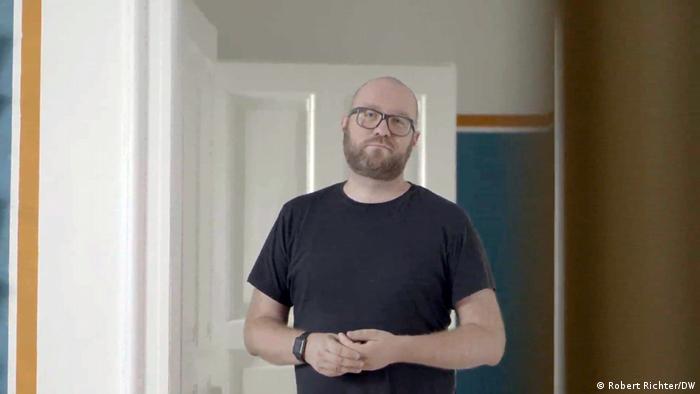 Weissenberg is a confident man. He is built like a tree: tall and sturdy. He’s a guy who likes to get things done. He tells his story in a calm and measured tone. Tami, a victim? Many would find it hard to imagine. But beware of those cliches that suggest that a victim must be small, soft, and weak — especially if the victim is a man.

Emotional dependency is the key to violence

Tami and his girlfriend moved in together. He supported her — both emotionally and financially. He remembers it as a rewarding relationship, and as they grew closer, they didn’t just share an apartment, but also a bank account and their day-to-day routines. Soon they were almost completely dependent on each other.

And then things took a turn for the worse.

“It first began when we were on holiday. We’d booked ourselves into a hotel that didn’t meet my girlfriend’s expectations and she refused to pay the bill,” Weissenberg remembers. “She wanted me to back her up, wanted me to tell the hotel manager that his place was a dump. But I refused, feeling ashamed to be doing him down.”

“Instead, I went ahead and got into the car and left her to do her own thing. And when she got into the car, she started to slap me around the head and screamed at me. So, I thought: ‘That’s not going to happen again, that I refuse to stand by her.'”

His girlfriend tried to justify her outburst by telling him about her troubled childhood. A childhood without love or affection. Without stability or continuity. And he bought it.

As the years went by, the emotional dependency grew. “I felt like a servant who always had to get everything right,” Tami remembers. He says it was his top priority to please his girlfriend and follow all her rules. There were rules for everything in their day-to-day lives: Which piece of fruit to choose, how how to pluck it, how to serve it. “And if I didn’t please her, then it was ‘bam!’ — a blow to the head. It was always the same thing: Get it right and please her or there will be trouble!”

But it was never good enough. His partner’s wishes became more extreme. The violence, too.

Eventually, Weissenberg ended up in the emergency ward with cuts and broken bones. Still, he didn’t defend himself. Didn’t hit back. For many years he hoped that she would see the error of her ways. “I was a bundle of nerves. Trying to function, to meet her expectations, not to repeat my mistakes. There was no time to feel lonely or reflect on my situation.”

As the years went by, it seemed less and less likely that help would come from outside. His girlfriend controlled all his social contacts. The couple began to avoid anybody who might suspect what was going on — including family members.

Society doesn’t recognize that there are also vulnerable men, men who are not perpetrators but victims don’t, says Elizabeth Bates, a researcher at the University of Cumbria in northern England. 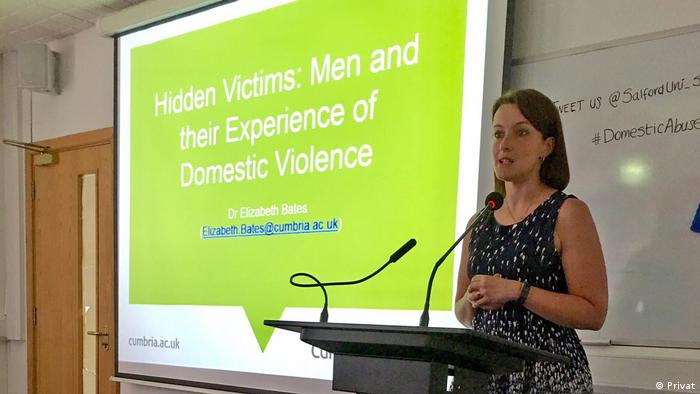 “The way that violence against men is sometimes portrayed on TV or in comedy programs is in the context of humor,” she says. “So we might laugh at women’s violence towards men, and that does really have an impact. There are a number of things that stop men from seeking help, like the fear that no-one will believe then or take them seriously. And the way it’s portrayed in the media and the way we talk about it can add to that fear.”

Bates’ research shows that, as a result of the way they are perceived by society, men find it hard to see themselves as victims of domestic violence. But this can come at a huge cost for the male victims: “They all describe long-term mental and physical health problems resulting from the violence they experienced,” Bates explains.

The spectrum of men’s experience is wide. According to a pilot study from Germany’s Ministry for Family Affairs (2004), every sixth man in Germany says he has been aggressively pushed by his partner. Ten percent were mildly slapped, “painfully kicked,” or had objects thrown at them. And most common are reports of emotional aggression. The partner might, for instance, cut off social contacts and control, humiliate or insult the victim, says the co-author of the study, Ralf Puchert, who goes on: “Approximately the same number of men as women say that they have experienced violence in a relationship at least one time in their lives. In relationships, men tend to experience serious violence far less frequently than women. But it is however not just a matter of isolated individual cases.”

Tami Weissenberg says the blows he received from his partner were not the worst aspect of their relationship. The pain from the psychological violence went much deeper: “One day, she was standing in front of me and then she took off her bathrobe and was naked. Then she started beating herself, scratching herself, and shouting: ‘Stop it! Ow! That hurts!’ So, there I was, standing in front of her, immobilized and asking myself: What’s this all about? And when she finished her assault, she got back into her bathrobe before pulling a small recorder out of her pocket.

“That really is a fine thing. A little dictating device — it’s my joker,” she said and left the room. From then on she threatened to blackmail him if he told anybody about her violence. Tami felt paralyzed: “I didn’t dare step out of line. I was so scared of losing face in society, of losing out professionally, and of not in any way being seen as a victim but as a perpetrator. And with fear, you can hold people down and lock them in.”

Figures show that men have similar experiences across the globe. Statistics from Mexico suggest that around 25% of all victims of domestic violence are men. In Kenya, Nigeria or Ghana unemployment and poverty regularly trigger violence from female partners. And it is the same story worldwide: Little or no support for male victims — especially in rural areas. 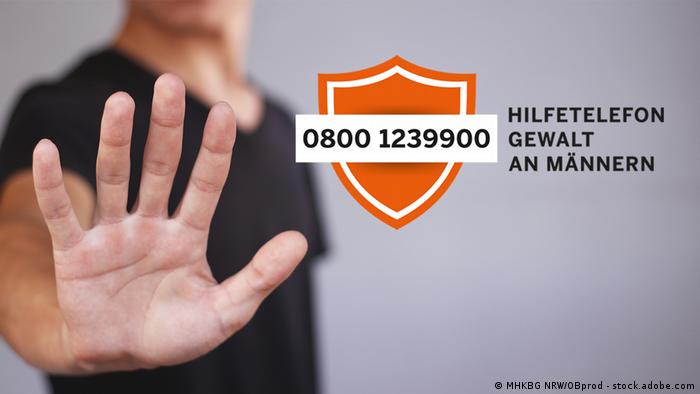 Germany has opened its first helpline for abused men

But things may slowly be changing in Germany. Earlier this year, the country’s first helpline for male victims came into operation.

“The men are looking for a place where people are going to listen. Somewhere where they don’t have the feeling that they’re once again just going to be told to pull themselves together,” says Andreas Haase from the Man-o-Mann advice center in the city of Bielefeld, which operates the telephone hotline

Demand is high. Dozens of men call up each week, hoping to get the help they need. Like Weissenberg, many of them see little hop. “Many of the men who call us are frightened of change. They think: if I go now, then she’ll really make my life hell.” Many of them are fathers who are terrified that contact with their children might be cut off if they break away from a troubled relationship.

“A lot of them don’t even see themselves as victims of domestic violence,” says Andreas Haase: “A certain familiarity with violence is all part and parcel of being a man. Violence on the street, violence in the schoolyard — it’s all standard fare for boys and men.”

Men grow up in societies where heroism is an important aspect of manliness, says British criminologist Antony Whitehead. Researchers and therapists focussing on men’s experiences agree that they must first be liberated from the prison of traditional images of what is expected of men. Then they must learn that they are not alone.

At the Bielefeld hotline, the first priority is to get the men to accept that they are victims. Which is normally a huge relief for them. For Andreas Haase, from Man-o-Mann, the goal is, “That the men begin a process where they have many more options. And where, for the first time, they begin to accept their feelings.”

This clear realization that things could not go on as they were came to Tami Weissenberg right out of the blue. “The turning point was when I had a sore throat and took a lift home from work. In fact, I should have been heading directly to the next pharmacy. But that wasn’t possible because my daily journey home was mapped out to the last detail, with telephone calls along the route to make sure that I was on my way. And that made me so helpless. Can you imagine what it’s like? So, I decided not to go home. Ever again.”

Weissenberg helped himself to escape from a toxic relationship. “What I was missing back then was somewhere I could turn to with all my fears and worries. Especially as a man. That is why I later set up a self-help group, where it became clear to me just how many men there are who need all sorts of help.”

The Weissenberg self-help group is now more specialized and established, offering counseling for men in crisis situations and safe spaces to take refuge in. Weissenberg himself is in a new relationship.

His name, Tami, is a pseudonym. He does not want to vilify his former partner or get back at her. When he tells his own story, he tries to understand her side of all that happened. Despite the pain they share, the two have never broken off all contact. “She has experienced too much loss and rejection. And her dream was to make up for that through material possessions. She always needed to be admired. Which was a kind of addiction. And that explains why she was so scared of losing what she had,” he says.

For Weissenberg, the debate over domestic violence is not a case of men versus women. Like the many advice centers for men, he always points out that, in the final analysis, women are far more likely to be victims of domestic violence than men — and that the consequences are generally much more dramatic. And he adds that it was the women’s movement and its struggle for equal rights that, in the first place, led to an awareness of violence against men. After all, women began to challenge traditional role models long before men. And, he concludes: “That struggle is far from over.”

This text was translated from German.