Federal prosecutors have charged a 26-year-old member of the extremist “Boogaloo Bois” movement with rioting in Minneapolis in the days after police in the city killed George Floyd in May.

The Minnesota US attorney’s office on Friday said Ivan Harrison Hunter of Texas had been arrested for allegedly travelling to Minneapolis during the unrest that followed Floyd’s death with the intent to riot.

Mr Hunter had been present as the Third Precinct police building in Minneapolis burnt on May 28 and had fired 13 shots from an “AK-47 style” semi-automatic rifle into the building, according to the US attorney’s office.

He had shouted “Justice for Floyd!” after firing the shots, prosecutors alleged.

President Donald Trump has attempted to cast the unrest on US streets this year as a creation of leftwing agitators and, in particular, antifa, a far-left movement with no formal group structure.

But a series of cases brought by the Department of Justice in recent months has highlighted the extent to which the violence seen in American cities this year is not easily attributable to any one group or ideology.

The FBI has said it is investigating acts of violence perpetrated by people who identify with antifa but has also warned that white supremacists pose the greatest domestic terror threat.

The Boogaloo Bois, a loose network of heavily armed anti-government extremists, have been connected to a number of violent acts and murders committed during the widespread protests against racism this summer that followed Floyd’s death.

Mr Hunter was alleged to have links with Steven Carrillo, another Boogaloo member who was charged in June for the murder of an Oakland, California, courthouse guard on May 29.

Prosecutors alleged the men had exchanged messages after the killing of the guard, David Patrick Underwood, in which Mr Hunter urged Mr Carrillo to “Go for police buildings”. 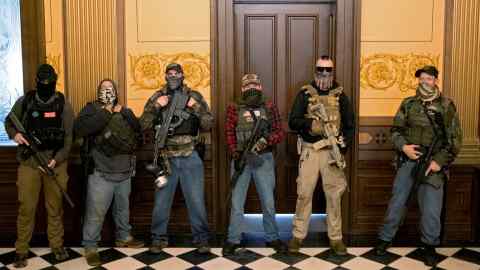 Court documents cited other messages allegedly sent by Mr Hunter in which he said: “I set fire to that precinct with the black community.” Other individuals, not associated with Boogaloo, have previously been charged with burning down the Third Precinct building.

Mr Hunter had also allegedly communicated with two Boogaloo members charged last month with attempting to provide support to Palestinian militant group Hamas, which is designated as a terrorist organisation in the US. The two members had been communicating with an undercover FBI agent.

The case announced on Friday follows the FBI’s disruption earlier this month of a plot by rightwing extremists in Michigan to abduct the state’s Democratic governor in a scheme that would have involved blowing up a highway bridge.

An attorney for Mr Hunter could not be immediately identified.