MedMen (OTCQB:MMNFF) is a slickly-marketed but poorly-run cannabis company. Now under new leadership, they are trying to turn things around but are hamstrung by high debt and high operating costs.

Desperate for capital, MedMen has renegotiated and expanded its convertible debt agreement with Gotham Green Partners (“GGP”). With these amendments, MedMen up-sized the facility to $285 million and received $12.5 million through another tranche of convertible debt.

Unfortunately, the amended terms are very favorable to GGP and unfavorable for investors. As amended, GGP’s pre-existing convertible debt and warrants will be converted to strike prices between $0.20-0.40/share. If MedMen uses its full $285 million facility, GGP will own convertible debt and warrants which can be exchanged for 1.4-2.6 billion MedMen shares. This will heavily dilute existing MedMen shareholders, who will own only 22-34% of the company.

MedMen’s management will have their hands full trying to turn this money-losing company around. Even if they succeed, investors may see limited upside due to the extreme dilution resulting from MedMen’s deal with GGP.

MedMen is a slickly-marketed cannabis company with busy stores. Their stores generate more revenue per store than average, partly due to a good brand name and due to leasing marquee locations.

Unfortunately, MedMen has been run very poorly. MedMen was founded by Adam Bierman and Andrew Modlin. The pair created a great brand and MedMen IPO-ed (RTO-ed) with a multi-class share structure that ensured the pair would continue to control the company. From there, the pair ran the company into the ground through exceptionally high costs, poor cash flow, and by taking on hundreds of millions of dollars of debt.

Shareholders suffered from this mismanagement. Shares are down 96% from their all-time highs, even after a 140% bounce from all-time lows.

Through multiple rounds of debt and equity sales, MedMen’s founders have relinquished their control of the company: Adam Bierman was removed as CEO and Bierman and Modlin’s Super Voting Shares were surrendered in January 2020. Replacing the founders, Wicklow Capital’s Ben Rose is now Executive Chairman at MedMen while Ryan Lissack is serving as interim CEO.

As of Dec 29, 2019, MedMen had $26 million in cash and had $237 million of debt with $25 million due in the next twelve months. Over the past two years, MedMen has burned through $560 million of cash flow losses to create a company with an enterprise value of about $450 million.

Given MedMen’s meager supply of cash and their heavy cash burn, the company has turned to capital markets for financing time and time again.

Financing deals: Over the past year, MedMen has twice sold equity to Wicklow Capital, in July 2019 and December 2019, issuing 62 million shares to raise $50 million. MedMen also extended the duration of an existing $78 million loan, resulting in a higher interest rate and issuing 40 million warrants while canceling 17 million warrants which were far from the money.

However, MedMen’s most significant loan is its senior secured convertible debt from Gotham Green Partners (“GGP”). That facility was initially announced in March 2019 at $250 million. Since then, this debt facility has been amended numerous times primarily to allow MedMen to access additional tranches of debt at the cost of giving GGP more favorable terms.

On Monday, MedMen closed on an additional $12.5 million tranche of senior secured convertible debt and announced that the total deal size has been up-sized to $285 million from $250 million. In aggregate, GGP has invested $147.5 million in MedMen and are set to invest a further $137.5 million. The most recent tranche of senior secured convertible debt converts at $0.26/share and expires in April 2022. Along with this convertible debt, GGP also received 100% warrant coverage with 48 million warrants with a five-year term and a $0.26/share strike price.

Amended terms: As with other debt facility amendments, GGP was able to extract more favorable terms from MedMen in exchange for lending more money. These alternations include: 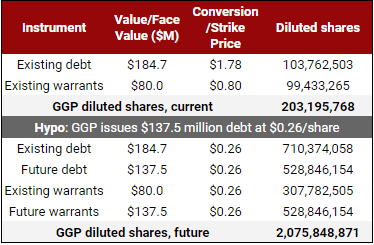 If GGP issues all the remaining debt in its agreement while MedMen shares are $0.26/share, they would own over 2 billion converted shares. Source: Author’s estimate based on company filings.

Hypothetically, if GGP loans MedMen $137.5 million while shares are $0.26/share, GGP will have convertible debt and warrants which can be converted into over two billion MedMen shares.

GGP’s future prices are capped and floored at $0.40 and $0.20/share, respectively. Provided that GGP issues all $137.5 million in their convertible debt facility, GGP will own convertible debt and warrants which can be converted into between 1.4 billion and 2.6 billion MedMen shares. These instruments, if converted to shares, would give GGP 66-78% ownership of MedMen with existing shareholders holding only 22-34%.

In the same press release, MedMen also pulled all of their future guidance including revenue guidance, store count guidance, and guidance on when they might reach EBITDA and free cash flow profitability. The company cited this to COVID-19 uncertainty and regulatory delays.

MedMen trades at a discount to other large multi-state cannabis companies. Source: The Growth Operation U.S. MSO Comparison, based on company filings and analyst estimates.

MedMen trades at a market cap of $250 million and an enterprise value of about $450 million. Over the next year, analysts expect the company to generate $238 million in revenue and to report $46 million in EBITDA losses. MedMen trades at 2.7x trailing sales and 1.9x forward sales.

MedMen is trading for cheaper than their peers based on these sales ratios, but that discount is well-warranted. MedMen is very far from profitability and their management team will have their hands full trying to trim enough costs to remain solvent and to bring the company to profitability.

Even more so, GGP’s massive potential number of warrants and stock options will limit future gains. GGP already has about 200 million shares worth of convertible debt and warrants, and this is likely to grow to 1.4-2.6 billion worth of shares as MedMen draws additional debt with strike prices between $0.20-0.40 per share. This massive dilution may limit investor gains even if MedMen’s management can successfully keep the company solvent.

I do not recommend an investment in MedMen. I currently own shares of MedMen and will strongly consider selling those shares in the future. MedMen has given me two billion reasons why selling may be a good idea.

Disclosure: I am/we are long MEDMEN, TRULIEVE, CURALEAF, GREEN THUMB. I wrote this article myself, and it expresses my own opinions. I am not receiving compensation for it (other than from Seeking Alpha). I have no business relationship with any company whose stock is mentioned in this article.

Additional disclosure: I may sell my MedMen shares within the next 72 hours.