Mastercard Is A Long-Term Buy (NYSE:MA) 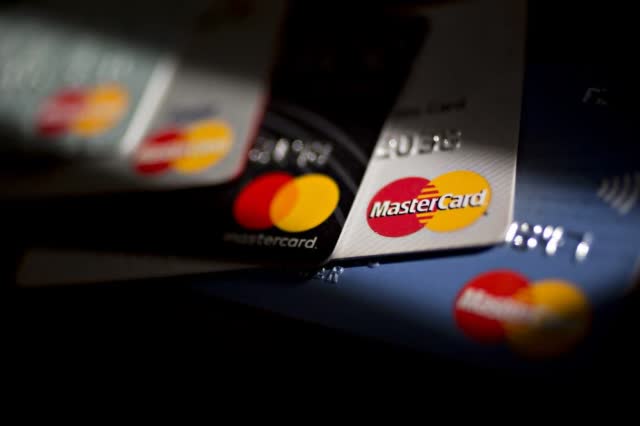 The payments processing space is a segment that benefits from strong consumer spending. Of course, during current times, there is going to be a drop in spend as consumers stay home and many stores, parks, and venues remain closed. While this temporary economic shutdown will negatively affect credit card processing firms, it is important to remember that it is temporary. While Mastercard’s (MA) stock trades at more lofty valuations than I usually prefer as a value and income oriented investor, I believe sometimes you must pay up for growth. In the long run, the continued adoption of credit cards over cash will allow this processing giant to benefit. We take a look at the recent performance, possible expectations, the current valuation and more.

Mastercard last reported earnings that were a beat on both the top and bottom lines.

Revenue grew 17% when accounting for currency fluctuations, a very strong number and better than Visa.

It was pointed out that 1% of this growth was due to new revenue from acquisitions. Operating expenses grew 11% year over year. The company attributed some of this to acquisitions and most of the rest to strategic initiatives. Earnings per share grew a lovely 141% when adjusted for currency fluctuations, helped in part by the tax regulation, higher revenue, and better operating margins.

For the full year, the company served investors with some impressive results. 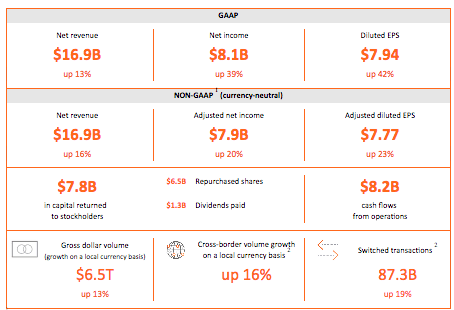 This is the reason the company receives a premium valuation. It continues to perform year after year and it can be expected to continue to do so. The company repurchased $6.5 billion in shares and returned $1.3 billion to shareholders in the form of dividends. Safe to say investors can expect increasing dividends and share repurchases in the years to come as the company matures and is limited to the investments it can make due to its already dominant position.

Looking ahead, Mastercard projects its compounded annual growth in earnings to be in the high teens and revenue to grow high-single digits. This should keep the stock moving forward; however, any miss on these expectations could lead to the highly valued stock to decline.

It should be noted that Mastercard recently warned investors that the economic turmoil will impact full-year results. 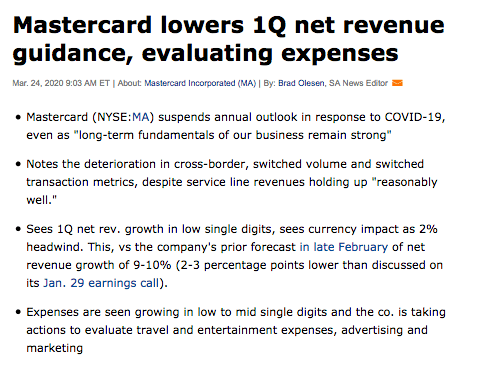 Despite all the staying at home being done, the company still expects growth to be in the low single digits which is quite impressive. I would argue that some of the shift from retail store spending to online spending by nature forces consumers to use credit cards as cash can’t be used. This will naturally increase business for Mastercard.

Looking at the balance sheet, we see Mastercard is in a healthy financial position. 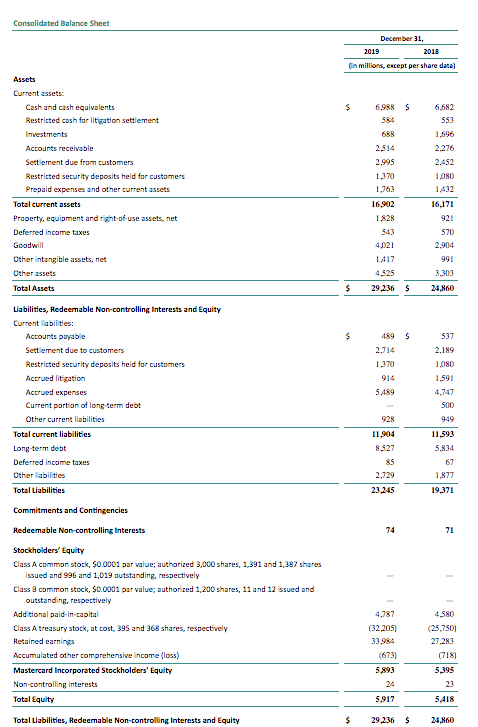 With $6.98 billion in cash on hand and only $8.5 billion in long-term debt, the company is in a pretty financially sound position. Because of this and its growing cash from operations, which was a lovely $8.2 billion for 2019, the company can continue to return cash to shareholders.

The industry stands to benefit as the continued adoption and rewards of credit cards increase.

So below we take a look at some interesting statistics of credit cards and the difference between the U.S. and the rest of the world. 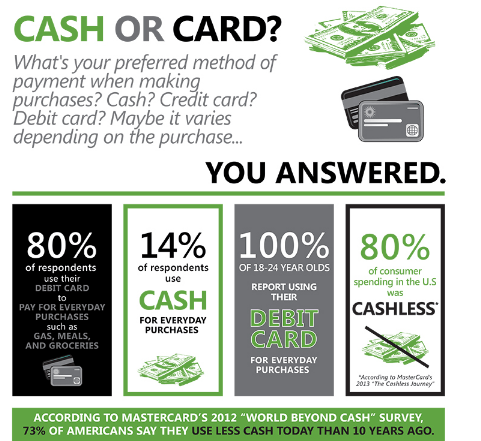 Interestingly enough, a large majority of Americans already use credit cards for most of their everyday purchases. While there was still 14% of Americans using cash for everyday purchases, this is rather small compared to the rest of the world. It does offer opportunity and market share to be obtained still by the likes of Mastercard. What is more interesting is that 100% of 18-24-year old report using their debit card to make everyday purchases. This will be a trend that continues with the next generation I would presume, and should continue to help benefit processors.

Now, when it comes to making larger purchases, the consumer seems to be more likely to use credit cards and/or cash. This is because they feel confident the purchase is protected with their credit card where there may be no recourse for them with cash. 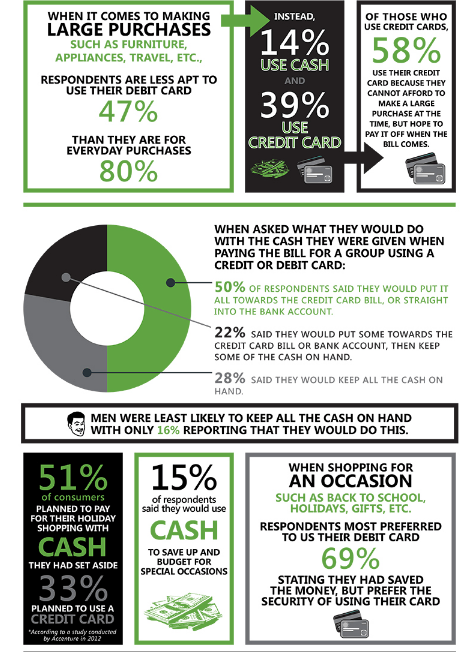 As we saw earlier, it seems like a majority of Americans are purchasing items using their credit or debit card. However, when it comes to making some larger purchases, perhaps they are still using cash.

According to Fortunly, there was still 12.7% of the United States GDP spent in cash. This was a total of $2.36 trillion in transactions that we know of that is still able to be obtained by payments processors. Why do so many people still use cash? If the consumer has the savings to pay for an item in cash, why not pay using a credit card which will give you essentially an interest free loan if paid in full when the bill is due? Why not try to use a credit card that offers rewards for spending? Perhaps for a discount, or some other type of saving they may receive for using cash. Or perhaps it is because when the consumer uses the credit card they tend to spend more. 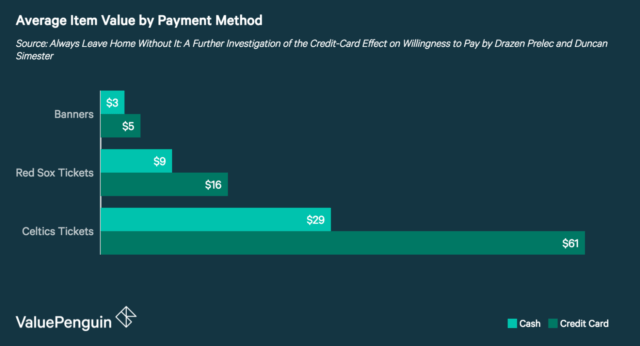 It seems like knowing one has the time to pay the bill may give them the confidence to spend more than they otherwise would. The physical recognition of handing over cash does seem to feel quite a bit more depressing than swiping a credit card, at least to me.

Where does the opportunity further become enhanced? Globally of course. Two of the world’s largest countries by population, India and China, have a statistically smaller percentage of people who own or use credit cards. How small? Only 20.9% of China’s 1.39 billion people have credit cards and better yet only 3% of India’s 1.35 billion people have credit cards according to the global economy website. Now, it is important to note that part of this is due to a large population of people in poverty. But these countries have been experiencing a surge in growth in their middle class, which of course stands to use credit cards as they become more widely accepted.

This is why Mastercard continues to see its “Rest of World” segment grow at a faster clip than the United States. What is more intriguing is that it saw stronger international growth than domestic. This is at a time when arguably the United States is one of the few actually growing. 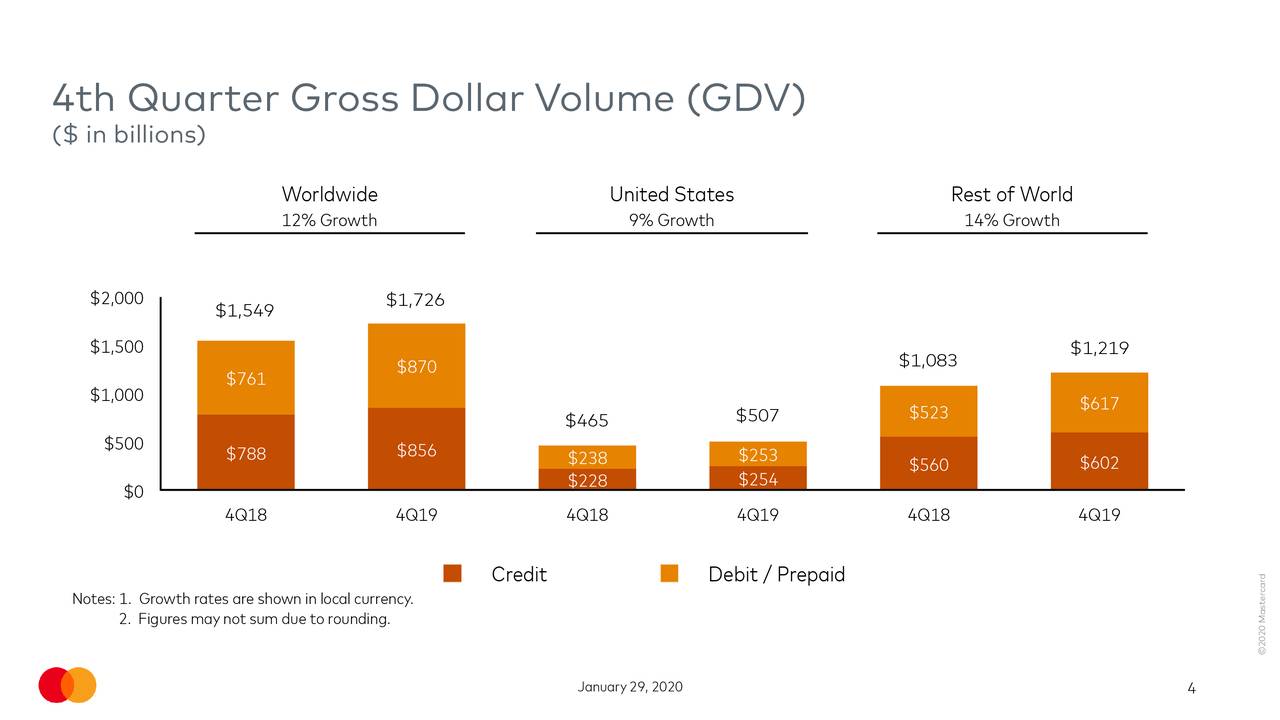 As the company shows us above, it saw a rather healthy growth of 14% overall in spend by the international segment outpacing the U.S. segment by 5%. This could only be due to continued adoption and usage of plastic for payments. It is noteworthy that despite only having 5% of the world’s population, the United States accounted for about 40% of total gross dollar transactions processed. Also, important to remember is that Mastercard has no risk in rising balances. So while consumers may start to use credit cards to finance purchases as a recession hits, the company stands to benefit from continued usage. However, a severe recession like we saw in 2008-2009 could lead to a decline in payments and thus begin to hurt Mastercard. Arguably, the recent economic shut-down was not one of natural elements and thus I expect a faster-than-normal recovery.

READ ALSO  'Better off thanks to China': German companies double down on resurgent giant

Looking at valuation, we can see that Mastercard is trading at a higher multiple than its peers.

We see from the chart above that Mastercard trades with the highest forward P/E compared to peers and the lowest yield. This would suggest the stock doesn’t offer value over peers. It would also suggest perhaps looking into competitors for investment.

Next, looking at the 5-year average valuation for Mastercard, we can see the stock appears moderately valued. 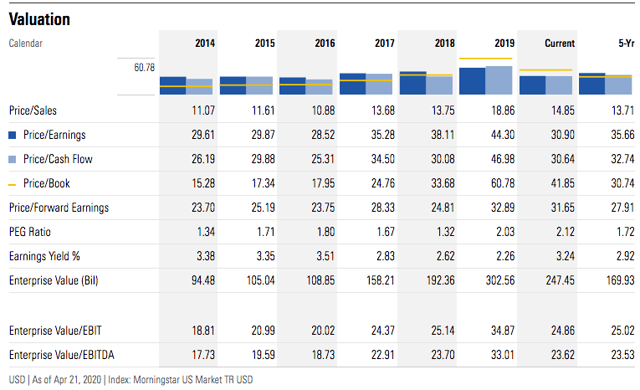 The shares currently trade at a higher than average P/S, but, lower than its average P/E and P/CF. They also offer a higher earnings yield than they have recently. Looking at this ratio, one would perhaps like to start a position here. There are risks due to us being uncertain how big of an economic impact the current situation will have. I would rather enter at a 15% discount to historical averages; however, investors should overlook this and realize sometimes you just have to pay up for a quality enterprise.

Mastercard benefits from the adoption of plastic over cash. The recent pullback in shares may be warranted due to there being a high likelihood of a severe recession. However, I believe the recession will be brief and there will be an abundance of pent-up demand once the economy re-opens. While we have not faced such a situation in modern times, we will come out of this stronger than ever. For long-term investors, the world will continue to grow and spending will continue to increase. Credit cards continue to offer distinct advantages to cash in most cases with ever-increasing rewards. Additionally, with more and more employees being paid direct deposit, the use of debit card should continue to rise as well. Mastercard currently offers investors an opportunity to start a position at a rare discount to some historical valuation metrics.

Disclosure: I am/we are long MA, V. I wrote this article myself, and it expresses my own opinions. I am not receiving compensation for it (other than from Seeking Alpha). I have no business relationship with any company whose stock is mentioned in this article.