One of the basic building blocks of any competition case is market definition. If you’re claiming that a company has market dominance, and that it’s abusing that dominance, what market are we talking about? Very obviously, the company being prosecuted tries to draw the definition as widely as possible – ‘we compete with the entire planet!’ – and the prosecutor tries to draw it as narrowly as possible – ‘Ferrari has a monopoly of rear-engined Italian sport cars with horse logos!’

The fun part of this is that both of these definitions are true, and so you have to dig rather deeper and work out what problem you’re trying to solve to work out what definition to use, because very often, picking the definition decides the outcome of the case, before it’s even started.

These questions come up a lot in talking about Amazon (NASDAQ:AMZN). If you read the accounts and do the numbers, you can work out that it has about 40% of US ecommerce (I wrote about this here). But US ecommerce is only part of total US retail – it was about 16% in 2019 and this year, with lockdown, it’s spiked to a bit over 20%. 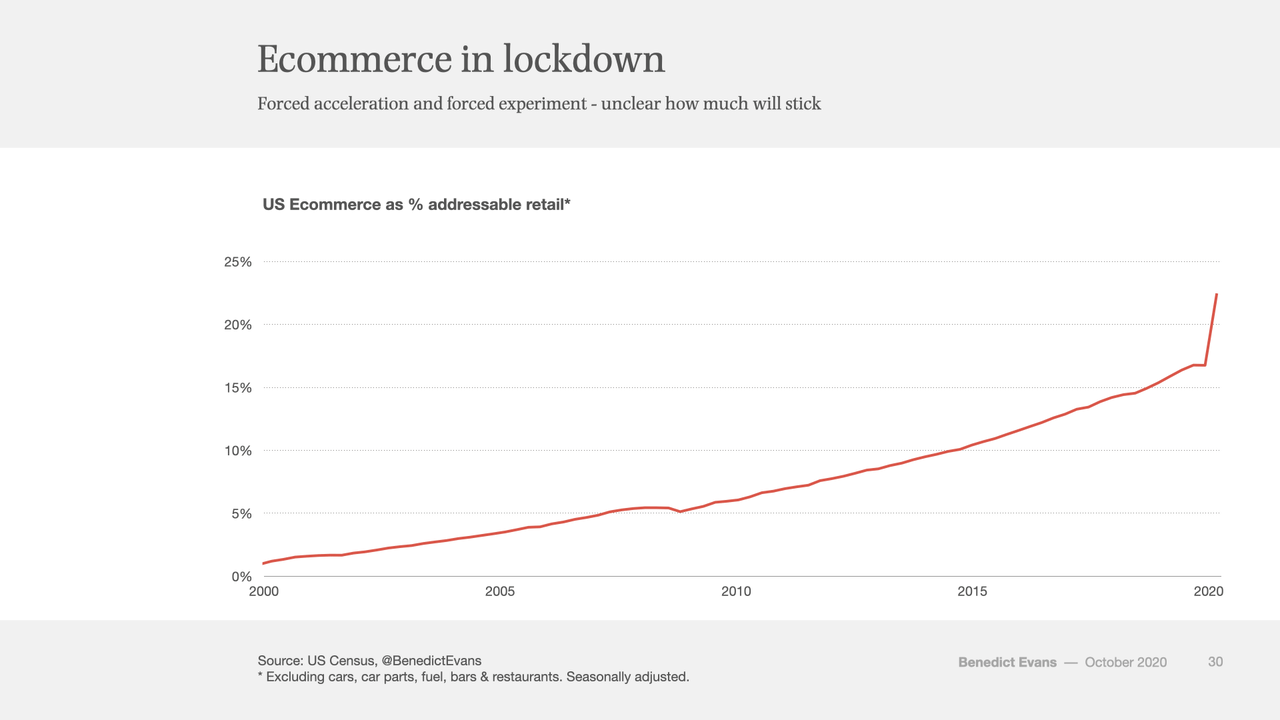 So, does Amazon have ~40% of ecommerce or ~10% of retail? Amazon’s lawyers would argue, entirely reasonably, that Amazon competes with Walmart (NYSE:WMT), Costco (NASDAQ:COST), Macy’s (NYSE:M) and Safeway – that it competes with other large retailers, not just ‘online’ retailers. Indeed, many people who argue most strongly for antitrust intervention against Amazon do so because it competes with physical retail – because they worry what Amazon will do not just to Costco but to their neighbourhood stores. On that basis, Amazon’s market is ‘retail’ and its market share in the USA is between 5% and 10%.

On the other hand, if you’re a book publisher, you don’t care what Amazon’s share of shoe sales is. Amazon has well over half of US book sales, and probably three quarters of ebook sales. So if we’re arguing about how Amazon runs its books business, it unquestionably has market dominance. You have to pull out a segment, not the whole company. Of course, this works both ways – if you’re pulling out segments, then Amazon has 1% of US grocery sales (even Walmart only has 20%), and you can’t complain about it buying Whole Foods.

Taking this argument further, global retail sales are over $20tr, so Amazon’s market share is truly tiny (!) – but Amazon doesn’t even operate in most of the world. 90% of revenue is in the USA, UK, Germany and Japan, so global share is meaningless. Pick your market.

Apple (NASDAQ:AAPL) is on the other side of a lot of these conversations. An Apple lawyer would say that it sells perhaps 15% of all the phones sold on Earth each year and that clearly doesn’t look like market dominance. However, about 25% of all the smartphones actually in use today are iPhones – there are about 1bn iPhones in use and 3-3.5bn Androids (iPhones have a longer average life). Is the global market what matters? If you’re a US retailer, or a developer trying to reach US consumers, Apple doesn’t have 25% of the installed base – in the USA, it has over half. Google told the DoJ that 60% of its US mobile search traffic comes from iOS devices, and you will hear similar numbers from other companies and indeed the mobile network operators themselves. Taking this further, Piper Sandler’s survey of US teenagers reports that over 80% of them have an iPhone. 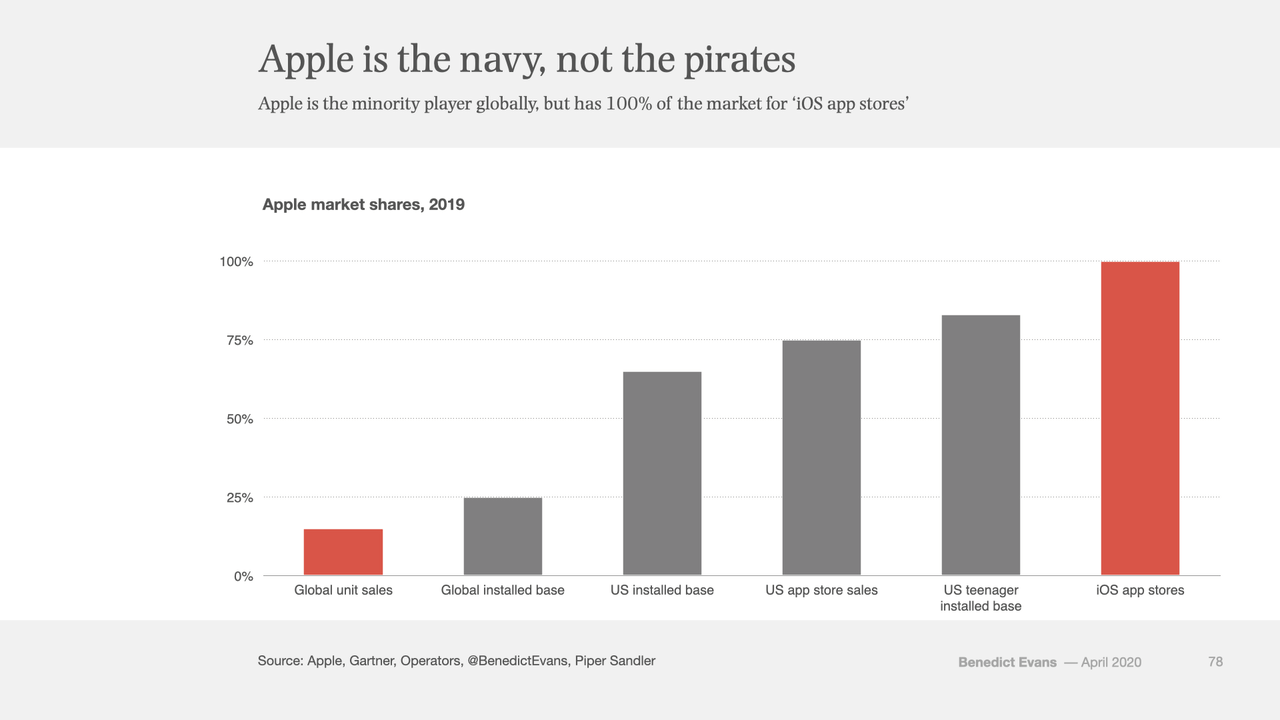 So, if you’re trying to sell to American teenagers, the fact that Apple has 15% of global handset unit sales is as meaningless as the fact that Amazon has 1% share of global retail. What matters is the install base of your customers, and in that market definition, Apple has 80%. Again – pick your market. Ironically, you can see Apple itself doing this – it uses the high numbers when it talks to developers and the low number when it talks to lawyers.

Looking then at Google (NASDAQ:GOOG)(NASDAQ:GOOGL) and Facebook (NASDAQ:FB), no-one would dispute that Google has 80-90% of web search (and this is true everywhere outside China), and Facebook and Google combined have half to two thirds of online ad spending. Online advertising is now about $250bn and total advertising is $500bn or so, and total marketing is $1tr. You could try to argue for a broad, $1tr market definition, but for most of Google and Facebook’s advertisers, online is the market – they’re not going to run a TV campaign. This seems like an easy definition.

Instead, the interesting argument comes when Google’s lawyer says that the competition in search isn’t Bing, but Amazon, and Facebook, and that the next threat is what Apple does with privacy on iOS. The government’s lawyer would laugh and say ‘that’s what everyone says!’ – and this would be true, but that wouldn’t mean the Google lawyer didn’t have a point. What do we think Sundar Pichai spends more time thinking about – whether Bing will catch up, or how far Amazon moves up the sales funnel and displaces product purchasing away from general web search entirely? How much does he look at DuckDuckGo and how much does he look at Pinterest?

The big shifts in dominance in tech in the last few decades have not generally come from a new product that does the same thing as the old one, but from a company doing something that changes the field of play. Microsoft (NASDAQ:MSFT) didn’t overturn IBM‘s dominance of mainframes – instead, PCs made mainframes irrelevant. Google didn’t make a new Windows, and Facebook didn’t take on Google at web search – instead, they carved out something new.

Going back to Amazon, you can see exactly this issue in the explosive growth of Shopify (NYSE:SHOP). It’s come from nowhere to do $60bn of GMV in 2019 and has already done close to $80bn in the first three quarters of this year. Shopify isn’t the same thing as Amazon (or indeed eBay). It’s not beating Amazon at doing Amazon, any more than Microsoft beat IBM at doing IBM – it’s doing something adjacent, and different, but deeply competitive. Tiktok is also doing this to YouTube now – Tiktok is not YouTube but it’s a much bigger question than DailyMotion. The threat comes from things that don’t fit inside a straightforward market definition. 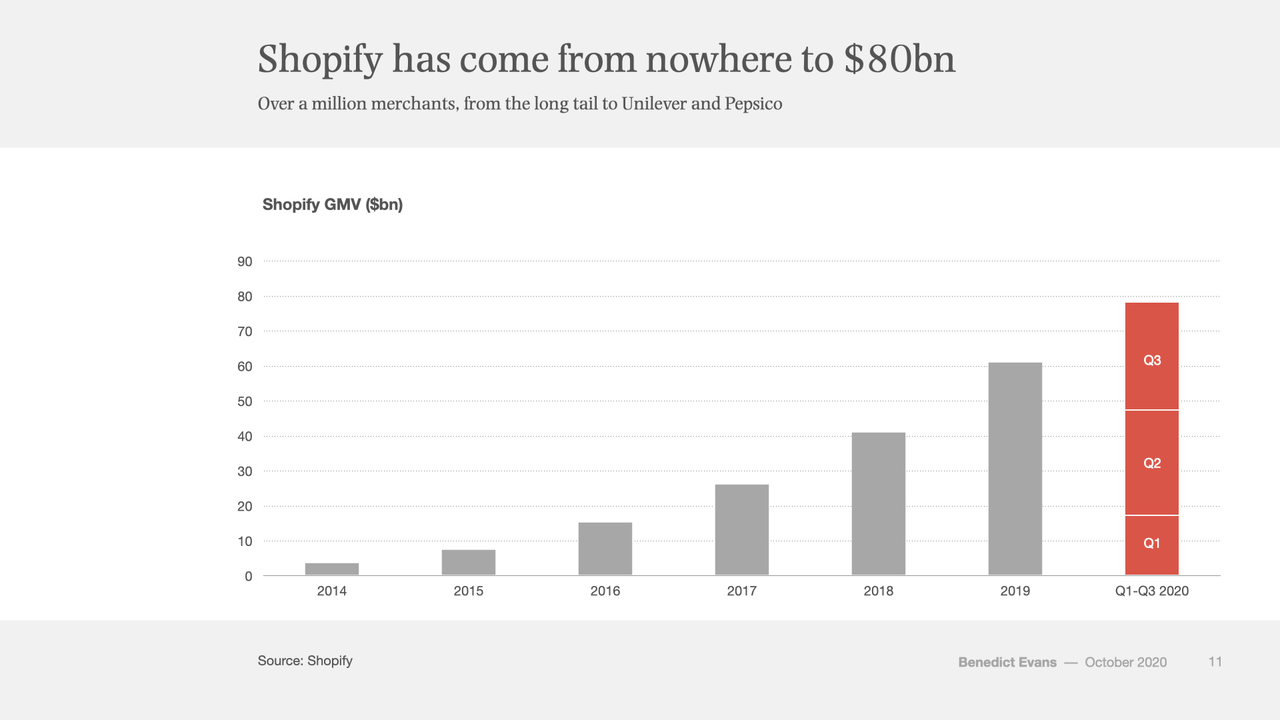 The counter-argument to this, of course, is the old line from Keynes – ‘in the long run we’re all dead’. It may well be the case that Google faces existential threats from things that don’t look like Google, but that doesn’t mean that we should ignore how it runs search today. AR glasses might overthrow Apple’s dominance of the US smartphone market, but that doesn’t mean we should just ignore how it runs the App Store and tell Spotify to go home. However, you do need to have a theory of what your remedies will achieve in a ‘market’ this complicated.

The DoJ’s current case against Google is a great illustration of how hard this is. Google is paying Apple to be the search default on iOS. The DoJ says this is Google abusing its search dominance (and consequent cashflows) to shut out competition, but you could equally well argue that this is a case of Apple using its smartphone dominance to squeeze $5-10bn a year out of Google. DuckDuckGo might be squashed either way, but who do you sue? Is this a search market case or a smartphone OS market case? And what happens next year? If Apple makes a search engine and uses the market dominance of iOS to create competition in search, what market definition is that?