Market Breaks Above 200-DMA. Is The Bull Back?

Are Market Bulls Too Optimistic

Currently, the markets are rallying in hopes of a “V-Shaped” economic recovery, which will be supported by a COVID-19 vaccine and no second wave of the virus. If such is the case, then it is expected the depression level readings of unemployment and GDP will quickly reverse, supporting the stock market’s current valuations.

There are several underlying problems with this narrative:

Currently, investors have gotten back to more extreme stages of bullishness as the market has relentlessly rallied from the lows. 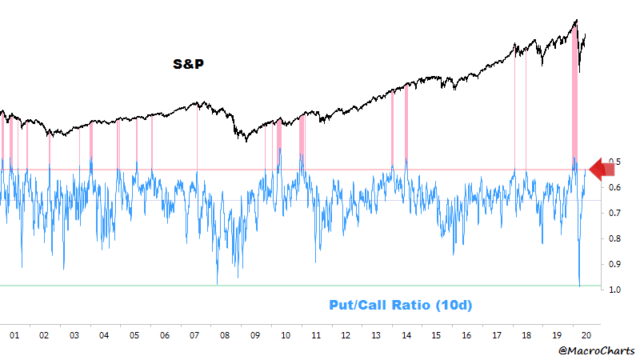 However, the complete detachment from the underlying fundamentals is likely to weigh on the markets soon than later. Irrespective of Fed stimulus, valuations do matter over the longer-term time and will drive forward returns. 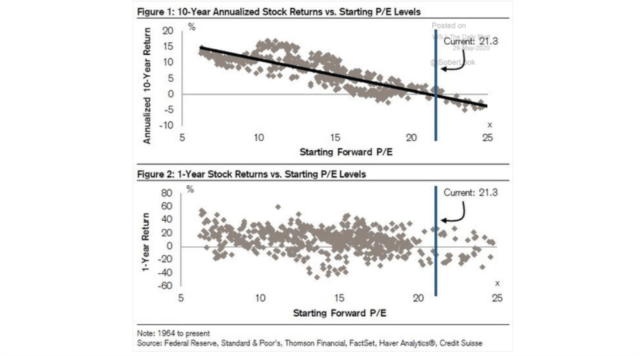 The problem is the valuation levels are worse than shown as earnings are still being revised lower, and will get worse. We know this because corporate profits were released this past week for Q1 and showed a record drop. That drop was for a quarter where the shutdown accounted for only 2-weeks of the reporting period. The decline in the second quarter will be materially worse as the entire month was lost to the pandemic.

READ ALSO  The More The EU Tightens Its Grip, The More Countries Slip Through Its Fingers

We can see the deviation between GAAP earnings and corporate profits if we use the data for first-quarter. 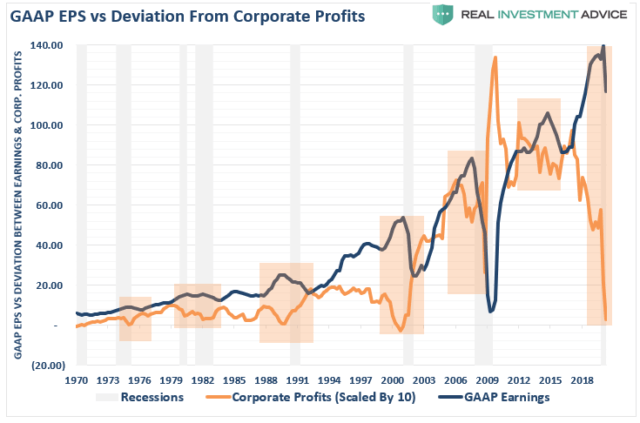 The shaded areas show the lag between the decline in profits and the decline in GAAP earnings. Over the next couple of quarters, profits are forecasting a much deeper decline for S&P 500 earnings. With estimates still in the $95/share range, we could see a rather substantial decline.

As stated, investors have priced in a “perfect” economic recovery story. Such leaves much room for disappointment as the deviation between what investors “expect,” and “reality” is at the highest level on record. 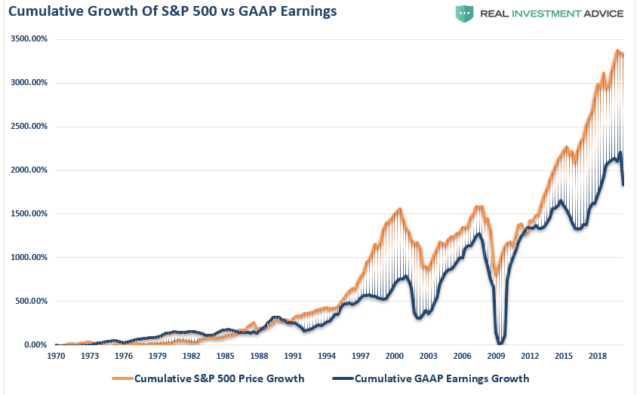 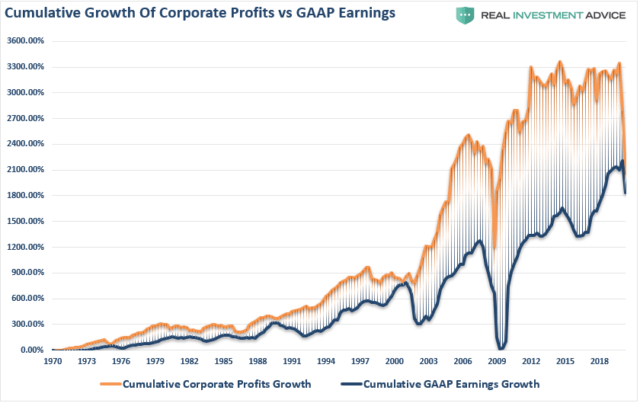 While investors are “hopeful” this time will be different, the reality of 40-million unemployed, mass failures of small businesses, and a contraction in consumption, argues differently.

“It’s too ‘happy days are here again. It’s just not going to work like that. Not with 38 million unemployed. You can’t keep building on a castle of sand. I see a lot of quicksand underneath some moves. I wish we would just calm down and digest some of these things.” – Jim Cramer, Mad Money

Technical Review Of The Market

No matter how you want to slice the data, the markets are back to more egregious overbought conditions on a short-term basis. With the markets very overbought, and in a very tight ascending wedge, watch for a break to the downside to signal the start of a correction. 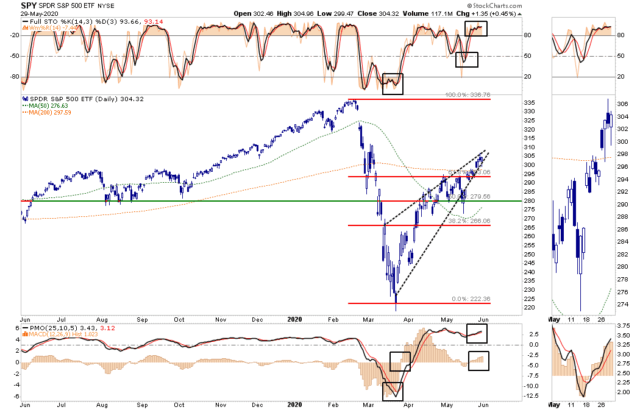 Also, with roughly 95% of stocks now trading above the 50-dma, such has historically signaled short-term corrections to resolve the overbought condition. 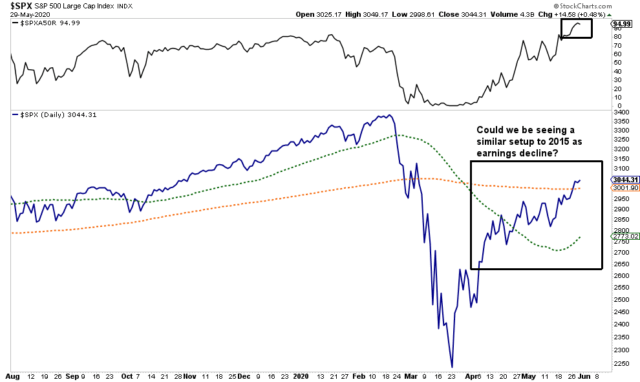 While much of the media has been talking about positive returns from stocks over the next 12-24 months, we could also have a 2015-2016 type scenario. 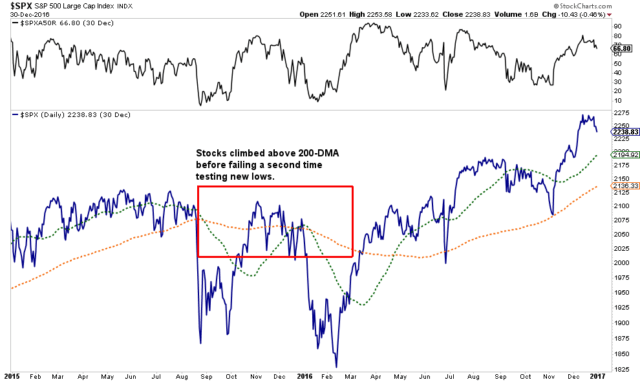 At that time, the markets climbed above the 200-dma, combined with a “Golden Cross” as the 50-dma also “crossed the Rubicon.” While the media bristled with bullish excitement, it was quickly extinguished as the markets set new lows as “Brexit” engulfed the headlines.

Importantly, while concerns about a “Brexit” on the global economy were valid, “Brexit” never materialized. Conversely, the economic devastation in the U.S., and globally, is occurring in real-time. The risk of a market failure as “reality” collides with “fantasy” should not be dismissed. It CAN happen.

Lastly, speaking of the number of stocks above the 50-dma, that indicator is laid behind the S&P 500 in the chart below. Historically, whenever all of the overbought/sold indicators have aligned, along with the vast majority of stocks being above the 50-dma, corrections were close. 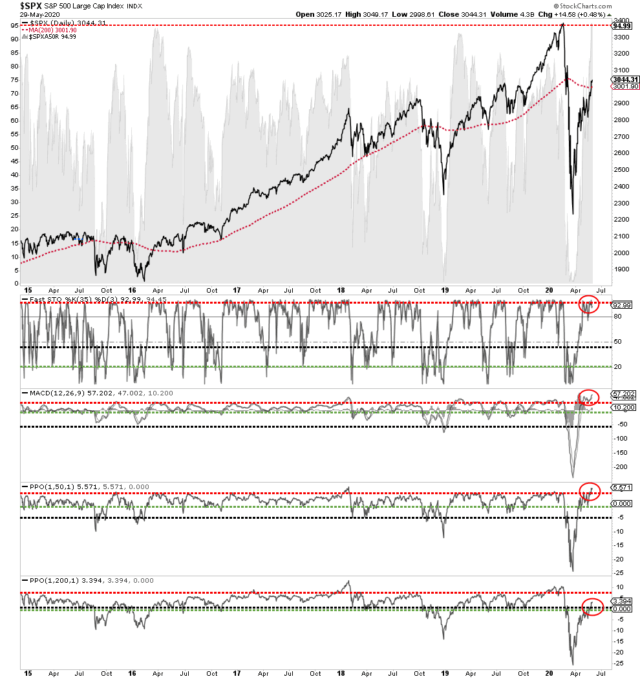 Such doesn’t mean the next great “bear market” is about to start. It does mean that a correction back to support that reverts those overbought conditions is likely. Therefore, some prudent risk management may be in order.

Portfolio Positioning For An Overbought Market

This analysis is part of our thought process as we continue to weigh “equity risk” within our portfolios.

Positioning, and the related risk, remains our primary focus. This past week made changes that reduced risk in our overall portfolio by taking profits out of the largest gainers and adjusting weightings in defensive holdings. The following is trade commentary provided to our subscribers:

In the equity portfolio we have rebalanced our exposures to align with our Relative Value Sector Report:

We are taking profits in:

We added exposure to:

Taking profits in our portfolio positions remains a “staple” in our risk management process. We have also increased our treasury bond and precious metals to hedge our increased risk over the last two months.

We don’t like the risk/reward of the market currently, and continue to suspect a better opportunity to increase equity risk will come later this summer. If the market violates the 200-dma or the ascending wedge, as noted above, is breached to the downside, we will reduce equity risk and hedge further.

I will conclude this week with a quote from my colleague Victor Adair at Polar Trading:

“The growing divergence between the ‘stock market’ and the economy the past couple of months might be a warning flag that Mr. Market is too exuberant. The Presidential election is just over 5-months away with polls showing that Biden may be the next President. The U.S./China tensions have been escalating, and the virus’s first wave continues to spread around the globe. However, the ‘stock market’ continues to be pulled higher by a handful of ‘Megacaps.’ The late Friday rally after Trump’s ‘punish China’ speech shows ‘animal spirits’ are alive and well!”

I agree, and while such may be the case for the moment, markets like this have a nasty habit of delivering unpleasant surprises.

Pay attention to how much risk you are taking.