March 2020 is surely a month to remember, not just for a week, a month or a year but forever. Markets were tanking and flying on almost a daily basis as sickening news about the spreading disease and rising number of deaths in Europe and the U.S. were partially offset by hopeful statements from the White House coronavirus task force on opening up the economy. 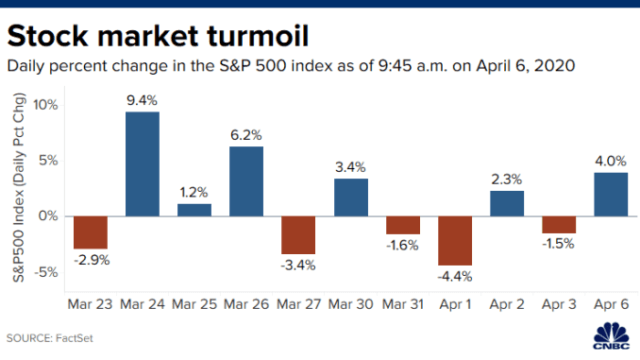 Eventually, after weeks of playing catch-up, the U.S. government finally had to admit the dire reality which is projecting around 100,000 deaths in a sort of best-case scenario for the U.S. if social distancing measures are followed.

Here in Germany, we are like a week ahead or so of the U.S. and I have transitioned to 100% home office and no physical contacts at all. Everything but essential business is closed, but I can still continue my work and so far at least haven’t had to cope with any sad news from people I know nor with any financial implications in terms of income. 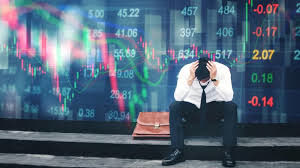 That said, both situations could change quickly, but as far as the financial impact is concerned, I am expecting significant declines in dividend income in this year. On top of that, unsurprisingly, the portfolio got absolutely hammered and I had to make a lot of decisions in an attempt to buy great companies at great prices while also selling stocks where I am seeing less potential. I made some risky bets but also some very calculated investments.

In any case, the most important lesson I have learnt is that if you can’t time the market – and I frankly can’t even though I was concerned about COVID-19 and the humanitarian and economic ramifications in early February; I also was not confident enough to hedge my portfolio or sell stocks – you should at least make sure to have ample funds available to deploy when the house is on fire. I had invested too much on the way up and got too euphoric about the economy and earnings. Naturally, you don’t expect a pandemic to hit us and shut down the world’s economies, but you never know what event triggers the next market meltdown and it is important to be prepared for it. I will take that lesson to my heart!

Personal opinion: I am an optimist, and while experts are saying this disease will cause long-lasting humanitarian and economic damage unlike anything else as the world was not properly prepared, there is light at the end of the tunnel. Some of these investments may pay off, others may not, only time will tell. If I believed in the doomsday scenarios of long-lasting mass unemployment and an endless shutdown in travel and entertainment (certainly the most impacted sectors in my view), I would have sold everything by now, bought a big stretch of land and grown my own food awaiting the apocalypse. Obviously, I am not doing this. Models, as sophisticated as they can be, never adequately track reality and I think human ingenuity and our thirst for survival, innovation and learning will eventually help us overcome this. Vital lessons will be learnt and the loss of human lives will add tremendous sorrow and grief to some, economic damage to many and exert implications on all of our lives. The biggest uncertainty for me is how the poorer and poor countries in the world will be impacted by this disease. Enormous humanitarian and economic aid by the G20 will be needed to tackle this as this is a global crisis and just defeating the enemy in parts of the world is simply a battle which is won while the war is still waging elsewhere.

As an investor, I believe that the world is not ending but instead it is a global wake-up call which shockingly underscores how vulnerable our health and wealth truly are, illustrating that we need to massively ramp-up research and preparation in the future.

Despite limited starting capital, I was still able to make some sizable investments in March by having sold Micron (MU) in February already, reshuffling the portfolio a bit and cutting down on spending. I invested around $2,700 in March of which the most important moves are:

In total, all those purchases substantially raised forward annual dividend income – even though over the next quarters not all of this is likely to be realized, breaking down as follows:

All net purchases in March can be found below: 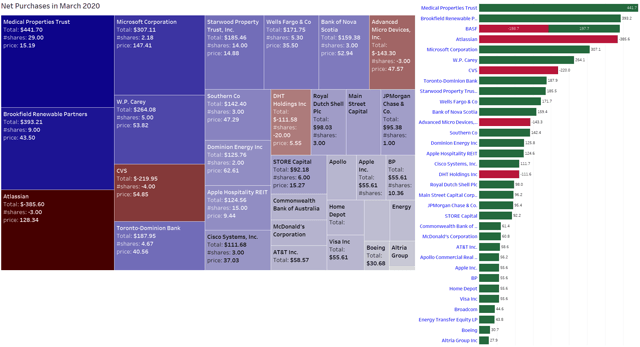 Dividend Income: What happened on the dividend side?

My dividend income from 35 corporations amounted to $442, up $22% sequentially and +11% Y/Y. Strong sequential growth is primarily driven by the semi-annual dividend payment from the Commonwealth Bank of Australia, whereas Y/Y growth is more broad-based and a combination of organic dividend growth and ongoing stock purchases. The biggest payers are undeniably the energy companies, and while both Shell (NYSE:RDS.A) (NYSE:RDS.B) and BP (NYSE:BP) so far have not cut or suspended the dividend, they are doing whatever it takes to preserve it as long as possible amid low oil prices. I am confident that eventually the massive oversupply in the world will be tackled by an epic cut in production which will later lead to a significant shortage in supply as world economies will be reignited powerfully once the curve has been flattened enough.

It will be very interesting to see how dividend income develops over the next 12 months. I am expecting significant declines in the energy, automobile, hospitality and financial sectors but believe that the big corporations will be able to ride this out by shoring up liquidity positions and drawing on credit lines. 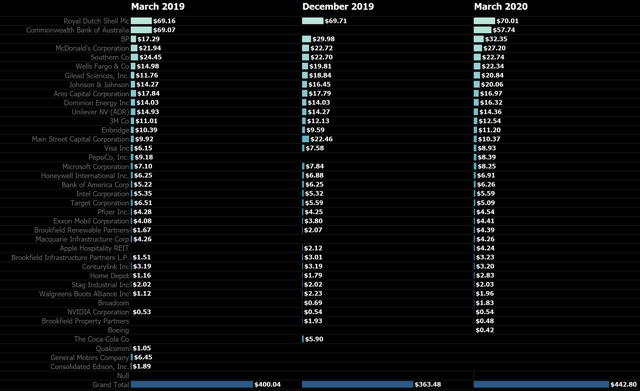 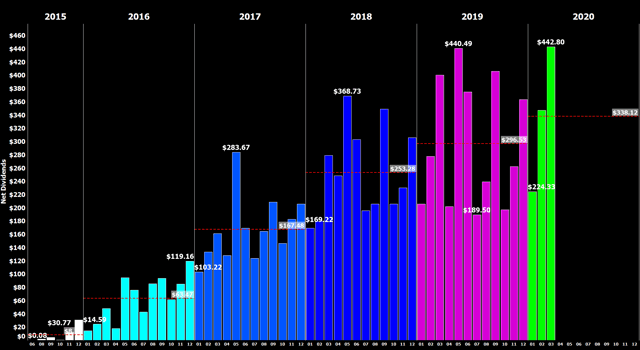 Next, I have scattered all the individual dividend payments I have ever received and colored them by year, rearranging the years side by side rather than horizontally as in previous updates: 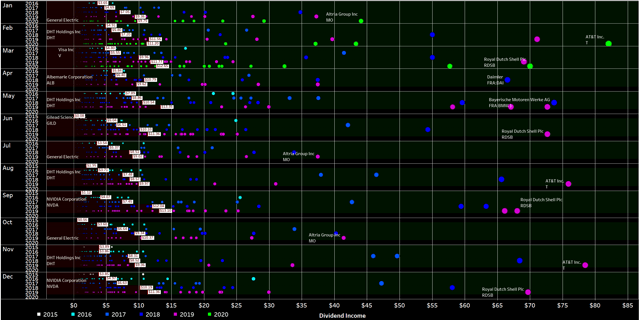 This view looks very cluttered at first, but it is very rich in information. It shows every single dividend payment I have received since I started my journey in 2015 in the shape of circle colored differently by year and sized based upon their contribution. The view is broken down by month and by year (not by year and by month), and thus allows to better see the development over time. For every year of a certain month, a white rectangle indicates the average monthly dividend. The area where dividends fall below that average is filled dark red, whereas the area above is colored dark green. Personally, I absolutely love this redesigned view of my old “bubbles chart,” as it is much clearer to identify developments and trends in my dividend income. 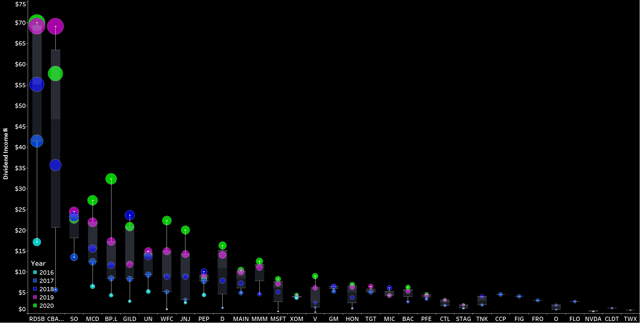 Now, zooming in on March only and arranging the view differently in the shape of a whisker plot shows the range of dividend income by individual stocks over the years. This allows to easily spot dividend growth and dividend cuts.

What draws immediate attention is, for instance, the decline in net dividend income from CBAUF in 2020 vs. 2019 which is solely the result of tax treatment. Here in Germany, income from dividends and gains from selling stocks are tax-sheltered up to €801, i.e. that any amount above that threshold is subject to around 28% tax. In 2020, I managed to hit that threshold earlier and thus the income from CBAUF in 2020 is not tax-free. On top of that, one can also easily see the big increases in dividend income from BP, WFC and Johnson & Johnson (NYSE:JNJ), mostly driven by stock purchases and only slightly by organic dividend growth.

At this stage, it is not possible to separate the impact of organic dividend growth and dividend growth from new purchases, but I hope I will be able to add that information somehow in the future, even though it is not simple to compute and visualize.

Still, it remains absolutely fascinating to watch how all these metrics develop over time. Right now, as I am still in the early stages, these metrics are not that impressive, but the growth is truly striking, and all these instruments help me measure it and provide meaning to it. Now that I have entered the fourth year of my road to financial independence, it is really motivating and encouraging to see how these bubbles are increasing in size and quantity and (slowly) moving up the scale.

Speaking in terms of meaning, another way to express the monthly dividend income is in terms of Gifted Working Time (GWT).

The view below shows YTD dividends for every year since 2015 – in this case, total net dividends for January for each year. The lower section depicts YTD Y/Y growth, i.e., as the year progresses, that green bar should creep up to at least 12%, so I will be able to hit my growth target. Right now, it stands at 15% thanks to a very strong February, but it is too early to extrapolate that growth for the rest of the year, especially given the uncertainty about future dividends in 2020 for various stocks impacted by the coronavirus. 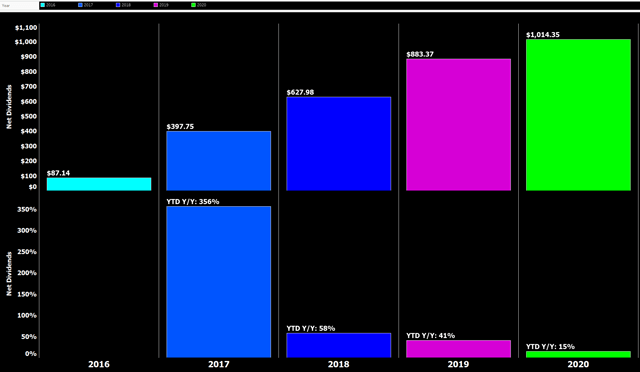 Expressed in GWT, it presents itself as follows: 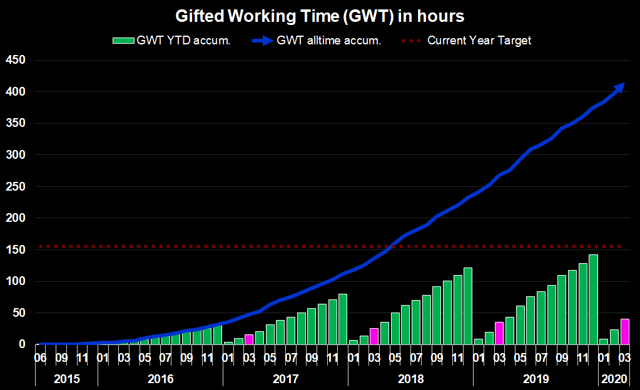 What this shows is as follows:

At end of March, my dividend portfolio is composed as follows:

If you like this content and want to read more about this and/or other dividend-related topics, please hit the “Follow” button on top of the screen and you will be notified about new releases.

Disclosure: I am/we are long ALL STOCKS MENTIONED. I wrote this article myself, and it expresses my own opinions. I am not receiving compensation for it (other than from Seeking Alpha). I have no business relationship with any company whose stock is mentioned in this article.

Additional disclosure: I am not offering financial advice but only my personal opinion. Investors may take further aspects and their own due diligence into consideration before making a decision.